Can McCain Come Back? 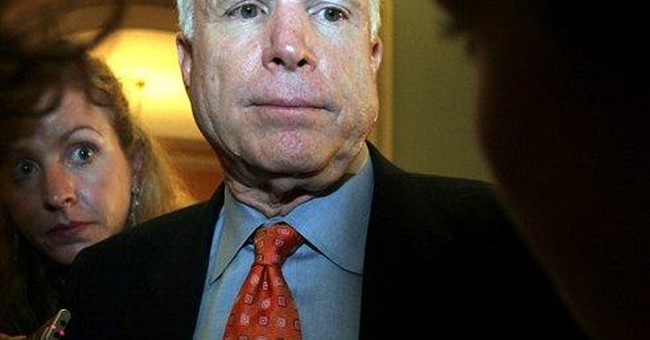 WASHINGTON -- Is it possible to revive John McCain's comatose presidential candidacy? Yes, say his loyalists, but only because he got rid of his professional campaign manager and his longtime political adviser. Without him sadly cleaning house in his campaign this week, Sen. McCain's decade-old dream would be finished. Now at least he has a chance, however theoretical and remote.

Terry Nelson, the departed campaign manager, is blamed for inadequate fund-raising and profligate spending: $44 million raised and $42 million spent. The sins of political adviser John Weaver, serving as chief campaign strategist, are less definitive but more profound. By the testimony of McCain insiders, Weaver was a vindictive presence who cast a pall over a campaign that he effectively controlled.

Yet, McCain's precipitous decline cannot be laid at the feet of two aides. The senator himself, long ago noting that he had "caught lightning in a bottle" in 2000, questioned whether he could replicate that magical campaign. That magic stemmed from McCain's allure as a dissident, who for years had sniped at the GOP Elephant. Now, as 2007 began, he was asking the Elephant to embrace him.

It once appeared the Elephant would comply. Last December, I wrote prematurely that McCain was beginning to look like the anointed nominee the Republican Party always prefers. The signal was a Dec. 8 reception for McCain attended by corporate representatives and other lobbyists and hosted by Senate Republican Whip Trent Lott, who takes pride in picking his party's successful nominee a year in advance. McCain was the front-runner, leading even in the key early state of Iowa (which he skipped in 2000).

The decline was precipitous, typified on June 30 when McCain finished fifth in the Pennsylvania Republican State Committee's straw poll. Inside the political community, the blame was consigned to tactical error. Nelson, a key operative in President Bush's 2004 re-election, ran McCain as a nationwide establishment candidate in the mold of Bob Dole and the Bushes. That course takes a lot of money, and McCain for months was warned by friendly outsiders of a fiscal train wreck. The campaign's cash flow dried up when his sponsorship of immigration reform ("amnesty") virtually ended small contributions.

Weaver's negative impact is more difficult to define. He has been a foreboding personality, engaged in a poisonous rivalry with Bush adviser Karl Rove. After the 2000 election, Weaver appeared to change parties -- working for the Democratic Congressional Campaign Committee and Democratic presidential candidate Wesley Clark. He was back with McCain for the '08 campaign, controlling entre to the candidate and keeping away people with whom Weaver had past grievances. Rick Davis, an experienced political operative, gave up his lobbying practice to work full time for McCain, but was kept at arm's length by Weaver.

As he left for a Fourth of July visit to Iraq, McCain was ready to fire Weaver. Mark Salter, administrative assistant and close adviser to the senator, prevailed on McCain -- tearfully, by one account -- to retain Weaver. When McCain returned, he had decided Nelson and Weaver must go, with Salter put on virtual inactive status.

McCain is not the first presidential candidate to begin on top and fade quickly. George Romney in 1967 was the early Republican favorite and never made it to the '68 primaries. Ed Muskie was the Democratic front-runner for 1972 but finished fourth in early primaries. In 2004, front-running Democrat Howard Dean was shot down in the opening Iowa caucuses. None ever recovered.

McCain's slimmed-down campaign will concentrate on early contests in Iowa, New Hampshire and South Carolina. Davis is far more adept than Weaver at singing McCain's praises. McCain supporters hope his eloquent support for the Iraq intervention will earn him backing from the Republican base.

That hope of reviving his campaign with advocacy for an unpopular war typifies the perfect storm afflicting John McCain. He is not forgiven for apostasy from Republican orthodoxy on campaign finance reform, global warming and stem cell research. His pledge not to raise taxes alienates him from his former idolaters in the news media. McCain's allies will be scrutinizing the polls. If he is running fourth at year's end, they say, the dream is over.