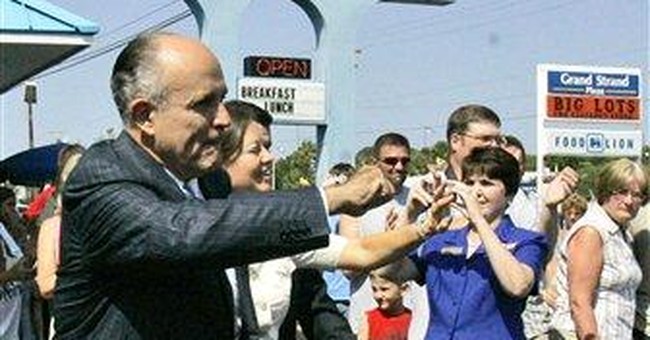 Editor's Note: Townhall.com is giving away two copies of Robert Novak's new book "The Price of Darkness" each day in July. Each day we will randomly select two registrants from that day. Winners will be notified daily and will be listed on this site. If you didn’t win one day, come back the next and sign up again for another chance to win! Enter to win today!

WASHINGTON -- Sen. Hillary Clinton is facing increasing Democratic criticism for using Mark Penn as her presidential campaign's chief strategist while he also serves as CEO of Burson-Marsteller, the public relations giant with corporate clients whose policies run opposite to Clinton's.

Clients include Royal Dutch Shell (attacked by Clinton for "windfall profits"), as well as tobacco and pharmaceutical firms with records she has deplored. Penn was a key operative in President Bill Clinton's 1996 re-election campaign and continued as a second-term adviser.

A footnote: Penn criticized Bloomberg News, which has reported on conflicts between Burson-Marsteller and the Clinton campaign, for obtaining "several months" of Penn's internal blogs. On June 29, a former employee who started a rival firm filed suit in New York City against Penn for monitoring his personal e-mails.

Newcomers among some 30 reporters who followed Sen. Barack Obama's campaign to Iowa this past week were surprised how little contact they had with the Democratic presidential candidate over two days.

Obama traveled in an SUV, at first alone and later with his family. No reporter ever entered the SUV, and Obama never visited the bus containing the reporters. One scheduled press availability was trimmed to 10 minutes.

A footnote: Obama's aloofness contrasted with Bill Clinton, accompanying Sen. Hillary Clinton's presidential campaign in Iowa the same week. At the Dairy Treat in Nashua, Iowa, the former president whipped out $60 and bought malts for reporters following his wife.

Rudy Giuliani was first with 87 votes, ahead of unannounced candidate Fred Thompson's 40. McCain was favored by only seven straw voters, also finishing behind Mitt Romney and non-candidate Newt Gingrich.

McCain had been scheduled to attend the Hershey meeting but cancelled because the Senate was debating the immigration bill.

The narrowly defeated attempt in the House June 28 to block funds for Vice President Dick Cheney's home upkeep and other expenses was voted against by two of the chamber's most powerful Democrats: Rep. David Obey, chairman of the House Appropriations Committee, and Rep. John Murtha, an Appropriations subcommittee chairman and an influential adviser of Speaker Nancy Pelosi.

That surprised House Democrats who considered the proposal a party matter because it was introduced by Rep. Rahm Emanuel, House Democratic Caucus chairman. The amendment to the Financial Services appropriations bill followed Cheney's continuing resistance to congressional efforts to extract information from him. It failed, 217 to 209, with 24 Democrats opposing it.

Obey and Murtha did not explain their votes. But as Appropriations "Cardinals," they generally oppose floor amendments to spending bills. While most of the other Democrats voting no were moderates, they also included left-wing Rep. Jim McDermott. His spokesman told this column McDermott "had questions about the impact" of the proposal. McDermott followed his vote with a floor speech calling for Cheney's impeachment.

Editor's Note: Townhall.com is giving away two copies of Robert Novak's new book "The Price of Darkness" each day in July. Each day we will randomly select two registrants from that day. Winners will be notified daily and will be listed on this site. If you didn’t win one day, come back the next and sign up again for another chance to win! Enter to win today! Liddy's Comeback

Sen. Elizabeth Dole of North Carolina, viewed as one of the most vulnerable incumbent Republican senators seeking re-election in 2008, has made a comeback with successful fund-raising and a boost in approval ratings.

Dole's private polls put her favorability level at 59 percent, compared with President Bush's 42 percent. Republican insiders attribute that mostly to her opposing the immigration bill backed by Bush. Thanks to effective second quarter fund-raising (at a level not yet announced), Dole is sitting on an estimated $2 million. She previously had been criticized as an ineffective first-term senator, mainly because of her national chairmanship of the failed 2006 Senate campaign.