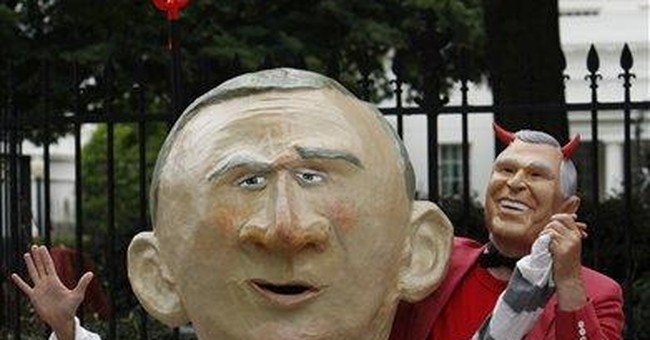 WASHINGTON -- When he finally decided he could not be responsible for sending Scooter Libby to federal prison, George W. Bush performed Monday as he had from the start in the CIA leak case. He sought to keep his distance from an incident that excited intense political emotions, making no value judgment other than that the jail sentence was unjustified.

For three years, President Bush had treated the leak to me of Valerie Plame Wilson's employment at the CIA as a legal prosecution and then a judicial proceeding about which he could not comment. But aides say he was sickened by the thought of Vice President Dick Cheney's chief of staff imprisoned for 30 months. How to prevent that without judging the merits of the case? By commuting the sentence, which retains Libby's fine and his ignominy as a felon.

That might be described as a Solomonic decision, but only if King Solomon actually split the baby and distributed halves to rival mothers. Democrats such as Senate Majority Leader Harry Reid, who called the president's conduct "disgraceful," would not have been any more upset by an outright pardon. While friends of Libby toasted champagne Monday night, they complained there was no pardon. It was an unsatisfying performance as an unhappy presidency nears its end, with Bush again standing aloof from the passion he has stirred.

Fierce Democratic critics seeking to criminalize Bush's military intervention three years ago seized on the Valerie Plame case. In his harsh reaction Monday, Reid described Libby as part of "White House efforts to manipulate intelligence and silence critics of the Iraq war." The president and his political advisers always have seemed oblivious to this intense campaign against him. The White House attitude that what we don't know won't hurt us resulted in Bush pointing with pride to the appointment as special counsel of Patrick Fitzgerald, the non-partisan U.S. attorney in Chicago. At that point, Bush lost control of a case that his enemies seized on as a serious threat to his presidency.

Even before he began his long investigation, Fitzgerald was aware that the leak to me that started the case was made by then Deputy Secretary of State Richard Armitage. No proponent of the Iraq intervention, Armitage did not neatly fit left-wing conspiracy theory about Iraq policy. Consequently, he disappeared from the Internet blather about the CIA leak constituting treason. Armitage was not indicted because the statute prohibiting the disclosure of an intelligence agent's identity was not violated. But Fitzgerald ploughed ahead with an inquiry that produced obstruction of justice and perjury charges against Libby though there was no underlying crime.

At the time, I found it hard to believe that Bush did not know Armitage's identity as the leaker. But his is a strange presidency, and nothing is stranger than the way he handled the CIA leak case.

At any point prior to Monday, Bush could have engaged the case by publicly posing questions: Why did Deputy Atty. Gen. James Comey name Fitzgerald as special counsel when the identity of Armitage already was known at the Justice Department? Why did Fitzgerald pursue the investigation when he knew Armitage was the leaker and had determined no evidence of a crime committed? Why did Armitage, Secretary of State Colin Powell and the Justice Department fail to notify Bush about Armitage's culpability?

The obvious answer to the last question would be that the president did not want to know. On Monday, however, he broke his antiseptic isolation from the case by decreeing the sentence did not fit a crime derived from bad memory and confusion. Bush, however, made clear he believes the serious crime of perjury was committed, but he did not want Libby as a faithful servant to do time for it.

When the U.S. Court of Appeals on Monday refused Libby's appeal to keep from going to prison immediately, Bush could no longer be sealed off. By staying aloof from the proceedings for three years, George W. Bush had triggered a chain of events that led to the federal conviction of Scooter Libby -- a conviction he still could not bring himself to publicly deplore when he commuted the sentence.