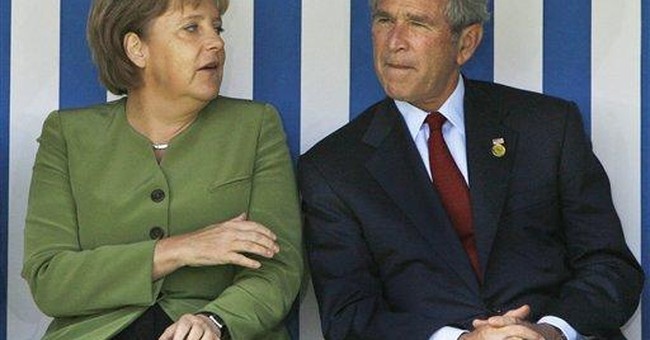 WASHINGTON -- Just when it seemed George W. Bush's sinking prestige with his Republican base had bottomed out, his stock there hit new lows last week. The president's seeming indifference to the sentencing of Scooter Libby was bad enough. It coincided with Bush's apparent determination to retain his friend Alberto Gonzales as attorney general against congressional pressure to depose him.

Prevailing opinion of the Republican Party's officeholders, contributors and activists could not differ more from President Bush's posture. They regard Libby as a valuable public servant who faces serious prison time, thanks to prosecutorial abuse made possible by Bush administration decisions, with no imminent presidential pardon. They see Gonzales as an embarrassment to the party who presides over a hollow Justice Department, while presidential staffers search for Senate votes to block a no-confidence motion.

The Gonzales-Libby equation is symbolic of Republican discontent with their president. He failed totally to narrow the party's internal gap over his immigration reform. Time is running out -- to less than three months -- on Republican forbearance for Iraq. In the closing months of the administration, key posts are unfilled and what old hands call "children" fill others. Facing multiple investigations, Bush aides without personal fortunes are threatened by daunting legal fees.

The treatment of Lewis Libby, once Vice President Dick Cheney's influential chief of staff, enrages Bush's fellow Republicans far more than their public utterances suggest. The president's studied distance from the CIA leak case led to appointment of a special prosecutor by then Deputy Atty. Gen. James Comey at a time when he already knew the leaker's identity. That distance has continued with Bush's response from Europe to Libby's conviction, filtered through a deputy press secretary, emphasizing that he had no intention to pardon Libby.

One Republican who did not watch her words last Wednesday was Washington lawyer Victoria Toensing: "If the president can pardon 12 million illegal immigrants, he can pardon Scooter Libby." Toensing is joining the procession supporting the still unannounced run for president by Fred Thompson, who is unequivocal in his outrage over Libby's fate and asserts he would pardon him.

Republican insiders who complain about Bush filling mid-level government vacancies with "children" cite a classic case. The president in September 2005 named Julie L. Myers, then 36 years old, to head U.S. Immigration and Customs Enforcement. She has never been confirmed, amid bipartisan agreement that she lacks the five years of management experience required by statute.

Myers is serving on a recess appointment. But 175 Bush nominees for federal offices (including 85 executive positions) were in unconfirmed limbo, until Henry Bonilla -- a seven-term Republican congressman from Texas defeated for re-election in 2006 -- bowed out last week. After two and a half months of inaction by the Senate Foreign Relations Committee, he figured he never would be confirmed for the important post of U.S. representative to the Organization of American States. The White House, working hard to save Gonzales, did nothing for Bonilla.

The White House is not a happy place for the people working there. Scott Jennings, deputy political director, had expected these final tough years at least would be crowned by his getting the top job. But his minor role in the U.S. attorneys controversy has ruled that out, while he instead has to worry about paying legal bills. Indeed, the need to hire expensive Washington lawyers is an impediment in attracting bright young newcomers to the administration.

What can a lame-duck president fighting an unpopular war -- the fate also of Harry Truman and Lyndon B. Johnson in their closing months -- do about this? Not much, but two possibilities are talked about in Republican circles: let Gonzales go, and pardon Libby. That might drop Bush's approval ratings even lower, but it sure would hearten his base.