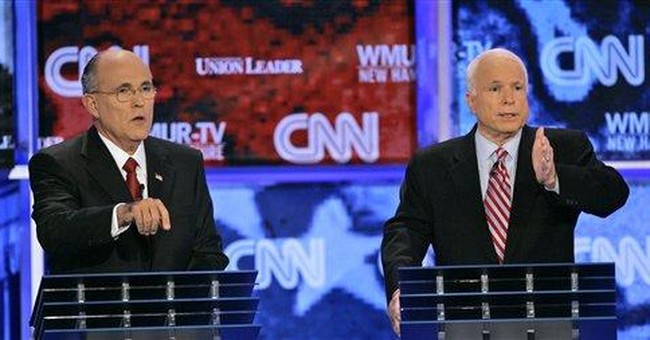 McCain is concentrating heavily on the rich target of lawyers and lobbyists in Washington, D.C. They have been invited to multiple McCain fund-raising events held in the nation's capital, currently a $1,000-a-ticket reception June 26 at the Capitol Hill Club with a potential "event co-chair" asked to raise $50,000. A large percentage of the Bush fund-raising team remains uncommitted, a signal that the Republican establishment is not satisfied with the present field seeking the party's nomination.

Washington super-lobbyist Ed Gillespie is prepared to step aside as state Republican chairman of Virginia after only six months if asked to join President Bush's senior staff as director of communications holding the Cabinet-rank of counselor.

Dan Bartlett, brought from Texas by Bush in 2001, has announced his resignation from the communications slot. There has been speculation about the difficulty of finding anyone to enter a White House under attack.

Gillespie, Republican National chairman during the 2004 Bush re-election, took the Virginia party position last December after a succession of Democratic statewide victories. However, friends of Gillespie say he feels it would be his patriotic duty to accept the White House post if offered.

After asserting he "always thought Roe v. Wade was a wrong decision," the actor-politician said: "I would not be and never have been for a law that says, on the state level, if I were back in Tennessee voting on this, for example, that, if they chose to criminalize a young woman, and -- ." Co-host Sean Hannity then interrupted: "So, states rights for you?" Thompson replied: "Essentially, federalism. It's in the Constitution."

Although Thompson in his first Senate campaign in 1994 said the decision to have an abortion "must be made by the woman," he built a solid pro-life voting record during eight Senate years that has generated presidential support for him among social conservatives.

Khachigian supported Sen. John McCain in 2000 but has not been a part of his 2008 effort. As a Nixon aide, Khachigian worked closely with Thompson in 1974 when he was Republican counsel to the Senate Watergate Committee.

A footnote: Tim Griffin, an expert at opposition research who performed that function at the Republican National Committee for the 2004 election, is being asked to join the Thompson campaign. Griffin served briefly as U.S. attorney in Little Rock, Ark., this year but stepped down amid controversy over President Bush's appointments of new federal prosecutors.

In the first quarter this year, Burkle gave $50,000 to Democratic congressional campaign committees -- $25,000 to the House and $25,000 to the Senate. Burkle has contributed $1.5 million to politics during his lifetime, with 98 percent going to Democrats.

The main union of Dow Jones employees enlisted Burkle to block Murdoch's bid for their company.