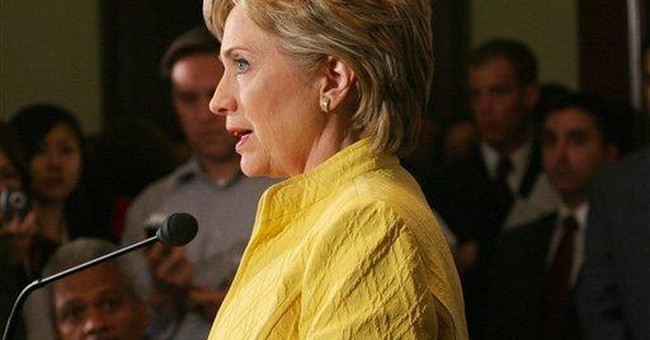 WASHINGTON -- Republican Sens. Lindsey Graham of South Carolina and Saxby Chambliss of Georgia were booed at their respective state party conventions Sunday for supporting a compromise immigration bill. Their specific sin was collaborating with the liberal lion of the Senate, Sen. Edward M. Kennedy. But behind the catcalls was Republican rage over undocumented foreigners, a sentiment GOP lawmakers must either appease or risk dire consequences.

Why are the party faithful throughout the country so incensed by immigration? When I asked Graham, he quoted from a federal government report on the new arrivals to this country, "largely unskilled laborers" and heavily illiterate: "The new immigration has provoked a widespread feeling of apprehension as to its effect on the economic and social welfare of the country." The report, by the U.S. Immigration Commission, was dated 1911.

When Graham returned to Washington Monday as the immigration debate began, he read the 96-year-old quote into the Senate record to demonstrate that fear of foreigners is not new for Americans. This nation of immigrants has greeted successive waves of newcomers with apprehension stoked by demagogues. It has overcome such past xenophobic impulses. But that will be more difficult in an era of Internet bloggers and radio talkers, with the Republican Party in trouble and seeking a unifying issue at the grass roots and with the Democratic Party sensing their adversary's weakness and moving in for the kill.

Graham and Chambliss, both up for re-election next year, were unprepared for the hostility they encountered at their state party conventions. At Columbia, S.C., delegates erupted in boos when Graham mentioned Teddy Kennedy's name. Chambliss's apparent proximity to Kennedy in a photograph evoked booing at Duluth, Ga. Unaccustomed to such treatment, Chambliss expressed his resentment to Senate colleagues back in Washington. Graham was not happy with his junior South Carolina colleague, Sen. Jim DeMint, for playing to the convention crowd with anti-immigration oratory.

Nor was Graham happy with the performance in Columbia by DeMint's candidate for president, Mitt Romney. The former governor of Massachusetts won cheers by claiming the Senate compromise constitutes "amnesty" -- the word guaranteed to rouse Republican audiences. Only two years ago, Romney supported a less restrictive bill passed by the Senate on grounds it did not constitute "amnesty." Sen. John McCain, who supports the Senate compromise and is Graham's choice for president, said Monday: "Maybe I should wait a few weeks and see if [Romney's position] changes."

Nobody can testify better than Rep. Mike Pence, a nationally renowned conservative, how dangerous this issue is for a Republican. In 2006, Pence brought a cascade of abuse on him for proposing an immigration compromise. He held his ground, recalling his Irish immigrant grandfather. But last week, he rejected the new Senate compromise as "amnesty" though it resembles his own plan.

Many Republicans reach for an anti-immigration lifeline because of the party's plight. Burdened with an unpopular president and an unpopular war, the GOP cannot claim to be the party of limited government and controlled spending. But immigrant-bashing divides rather than unites Republicans as the South Carolina and Georgia conventions showed. In a recent closed-door meeting of the House's conservative Republican Study Committee, Rep. Bob Inglis of South Carolina raised the danger of resembling South Africa's National Party advocating apartheid.

Republican Sen. Jeff Sessions, while probing for the compromise's weak spots in Senate debate Tuesday, warned of "cultural" change resulting from a flood of low-income immigrants. That recalls the 1911 report of the U.S. Immigration Commission (headed by an old-fashioned Republican conservative, Sen. William P. Dillingham of Vermont) asserting that the "proportion of the more serious crimes of homicide, blackmail and robbery . . . is greater among the foreign born," who also refuse to learn the English language.

In reading part of Dillingham's report into the Senate record, Graham declared that these immigrants who were "ruining America" fathered the "greatest generation." That immigrant wave included my grandfather, a Russian Imperial army veteran working on the John Deere tractor assembly line in Moline, Ill., as an unskilled, undocumented alien who could not speak English. Refuting Dillingham, he was an American patriot proud of a son who fought with the U.S. infantry through Africa and Italy in World War II.