Hillary Up, Obama Down 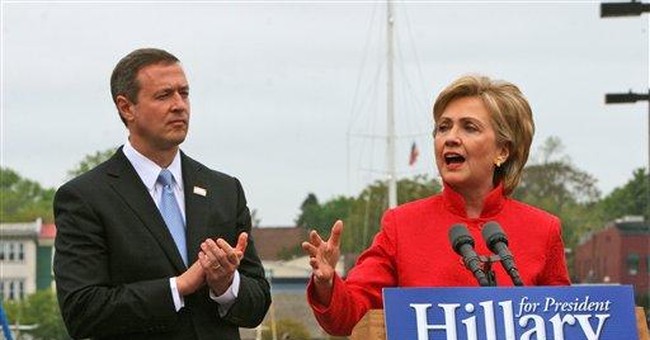 Not many people actually watched MSNBC's telecast of the debate from Orangeburg, S.C., but press accounts and word of mouth have spread the news of Obama's performance. When asked by moderator Brian Williams what he would do as president if he learned that "two American cities have been hit simultaneously by terrorists," Obama replied -- citing Hurricane Katrina -- that "the first thing we'd have to do so is make sure that we've got an effective emergency response." In contrast, Clinton responded that she would "retaliate."

Obama's unsatisfactory answer generated criticism in Democratic circles that he is too inexperienced and that his managers are relying on his personality and biography rather than taking vigorous positions.

Fred Thompson's admittedly disappointing debut as a potential presidential candidate addressing Republicans in Orange County, Calif., May 4 stemmed from his decision to personally rewrite an effective speech written for him.

A 1,600-word excerpt from the prepared speech, put on the Internet, energized conservative activists in Washington. But the actor-politician sat down in his Balboa Bay Club suite to rewrite the speech. Thompson does not like to read from texts, and he reduced his rewrite to notes that became the basis for his presentation.

The final version delivered was less tightly organized and more verbose than his prepared remarks. It omitted making common cause with Sen. Tom Coburn's crusade against pork, and added a concluding anecdote about talking issues with sixth-grade students.

While Republican presidential candidates woo California Gov. Arnold Schwarzenegger for his endorsement, the former movie star's relationship with the state GOP has all but disappeared.

Prominent California Republicans generally do not want to criticize publicly the party's only statewide office holder, but privately they say Schwarzenegger has been governing as a Democrat since his re-election on a liberal platform last year. The complaint among Republicans is that the governor follows the lead of his Democratic wife, Maria Shriver.

A footnote: With Schwarzenegger's term as governor ending at the end of 2009, there has been speculation that he might run that year for mayor of Los Angeles. He currently spends much of his time in L.A. rather than the state capital of Sacramento.

Rep. Kenny Hulshof, a rising Republican star in Congress, is on the short list to be University of Missouri president. That raises the possibility of Democrats picking up his House seat representing Missouri's Little Dixie.

Hulshof won the once solidly Democratic seat in 1996 with 48 percent of the vote and was given a coveted membership on the House Ways and Means Committee. Hulshof has won recent elections with over 61 percent (even in 2006, when Democrats were winning elsewhere in Missouri and a state Senate seat in the district was lost by the Republicans).

Missouri Republican strategists worry that it would be difficult to retain the district in a special election if Hulshof takes the university post.

One year after Rep. Patrick Kennedy of Rhode Island checked himself into rehabilitation after crashing his car into a vehicle barrier on Capitol Hill because he was visibly impaired, he testified about drug rehabilitation at a little-noticed hearing Tuesday of the Senate Health Committee.

Kennedy in 2006 said a sleep aid had caused him to get up and drive in his sleep, but before the crash that night he was seen at the Hawk and Dove bar on Capitol Hill. Republicans on the Senate committee did not ask him about his use of rehab to avoid consequences of his accident.

A footnote: The congressman's father, Sen. Edward M. Kennedy, is chairman of the committee but was in Northern Ireland Tuesday on official business.

To find out more about Robert D. Novak and read his past columns, visit the Creators Syndicate web page at www.creators.com.