How to Lose an Ally 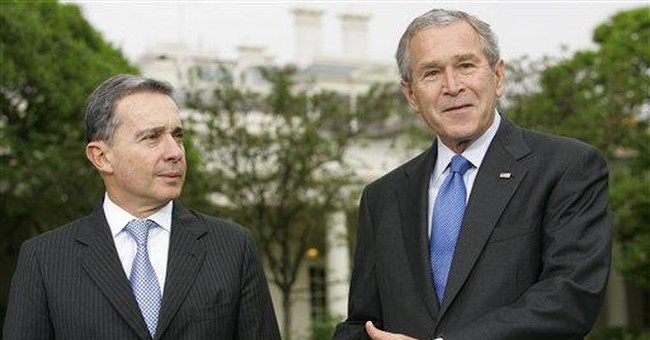 WASHINGTON -- Colombia's President Alvaro Uribe returned to Bogota this week in a state of shock. His three-day visit to Capitol Hill in Washington to win over Democrats in Congress was described by one American supporter as "catastrophic." Colombian sources said Uribe was stunned by the ferocity of his Democratic opponents, and Vice President Francisco Santos publicly talked about cutting U.S.-Colombian ties.

Uribe got nothing from his meeting with House Speaker Nancy Pelosi and other Democratic leaders. Military aid remains stalled, overall assistance is reduced, and the vital U.S.-Colombian trade bill looks dead. The first Colombian president to crack down on his country's corrupt army officer hierarchy, and to assault both right-wing paramilitaries and left-wing guerrillas, last week confronted Democrats wedded to out-of-date claims of civil rights abuses and to rigidly protectionist dogma.

This is remarkable U.S. treatment for a rare friend on the South American continent, where Venezuela's leftist dictator Hugo Chavez can only exult in Uribe's embarrassment as he builds an anti-American bloc of nations. A former congressional staffer, who in 1999 helped author Plan Colombia against narco-guerrillas, told me: "President Uribe may be the odd man out, and that's no way to treat our best ally in South America."

Uribe has not given up on the Yankees. When he returned to Colombia, he issued boilerplate about his visit being "very important in opening a dialogue with American leaders." This week he publicly urged the sluggish army to "rescue the hostages" held by narco-guerrillas and "go after the ringleaders," while privately chewing out the generals for inactivity. At the same time, Deputy Secretary of State John Negroponte, whose Foreign Service career includes Latin American duty, was in Bogota Tuesday insisting that the United States remains a great friend of Colombia.

A truer portent of the Colombian reaction to the rebuff in Washington last week was Vice President Santos's television interview Tuesday. Santos, a University of Texas graduate and former editor of the influential El Tiempo newspaper, said failure to ratify the free-trade agreement would "send a message to the external enemies of the United States" (meaning Venezuela's Chavez) that "this is how America treats its allies." He added that Colombia might "have to re-evaluate its relationship with the United States." A U.S. diplomat called that "a cream pie in the face" of the visiting Negroponte.

Hopes that the Democratic majority in Congress might perceive the importance of supporting Colombia were dashed April 20 when Al Gore canceled a joint appearance with Uribe at an environmental event in Miami. Gore cited allegations of Uribe's association with paramilitary forces a decade ago, charges denied by the Colombian president.

In the wake of Uribe's visit to Washington, two prominent House Republicans -- former Speaker J. Dennis Hastert and Rep. Ileana Ros-Lehtinen, ranking minority member of the Foreign Affairs Committee -- made a quick trip to Colombia. Visiting there for the first time in many years, they were struck by the progress. They met with Colombian national police who had just returned from Afghanistan, where they advised NATO forces in techniques for dealing with narco-terrorists.

Democrats in Congress seem oblivious to such help or such progress. Sen. Patrick Leahy, chairman of the Appropriations subcommittee dealing with foreign aid, last month held up $55.2 million in military aid to Colombia because of "human rights" concerns. While Pelosi and her colleagues could not find a kind word for Uribe, Leahy insisted that he "supports" the Colombian president. As Lenin once put it, he supports him as a rope supports a hanged man.

President George W. Bush at least gave lip service to Uribe last week, but his concentration is on Iraq as the U.S. position in its own backyard deteriorates. Passivity is the best description of the administration's posture, while Democrats follow human rights activists, environmentalists and labor leaders on the road to losing an important ally.