Man who would be Reagan doesn't wow 'em 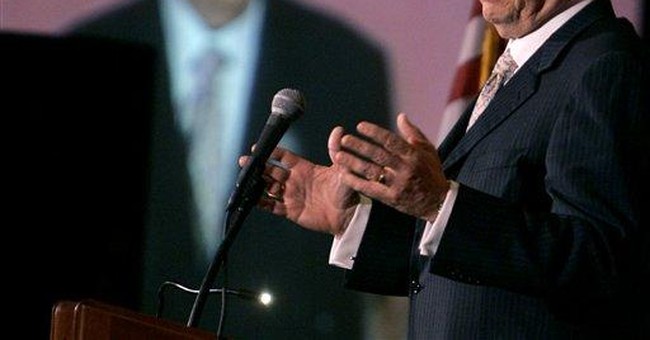 NEWPORT BEACH, Calif. -- ''Will he announce?'' asked the Lincoln Club of Orange County's publication in preparation for Fred Thompson's appearance at the organization's 45th annual dinner here Friday night. A rumor, totally unfounded, ran rampant before his speech that Thompson would declare his candidacy for the Republican presidential nomination at the dinner lectern. In fact, he did not even hint at this prospect in a performance that was a letdown for the packed audience of conservative Republicans.

''It was not Reaganesque.'' ''No red meat.'' ''Too low key.'' That was the preponderant reaction I heard to Thompson's half-hour presentation (leavened by a few favorable comments, mostly by women, that he was more ''statesmanlike'' and ''presidential'' than the announced candidates). Lincoln Club members, like many conservative Republicans, had been unimpressed by the existing field of Republican hopefuls and envisioned Thompson as the second coming of Ronald Reagan. They did not get it Friday night.

The excitement aroused in melancholy Republican ranks by the politician-commentator-actor will not be doused by one lackluster performance. Nevertheless, his first speech since his unexpected presidential boom began suggests Thompson needs preparation if he does take up this daunting burden. The deeper concern by some supporters is whether the tepid reaction in Orange County will shake what had seemed his clear resolve to make the race.

Expectations were exaggerated as well-dressed Republicans gathered at the posh Balboa Bay Club on Friday night. Dissatisfaction with the current presidential field was intensified by the chaotic nationally televised debate of 10 Republican candidates the previous night. Rudy Giuliani seemed uncomfortable dealing with standard conservative issues. John McCain sounded harsh and hawkish. Mitt Romney's newfound conservatism still seems contrived to many in the Republican base. ''Everybody is still looking for the conservative candidate,'' Orange County Republican Chairman Scott Baugh told me.

That explains the anticipation awaiting Thompson. He had vaulted from nowhere into the top tier of Republican candidates without running an ad, spending a dime or giving a speech. He did not organize his astounding series of first-place straw poll finishes at Republican gatherings in California, Pennsylvania, Oklahoma and Georgia. He was impressive, wowing a closed-door meeting of House Republicans and turning up at the national Catholic prayer breakfast.

Thompson's problem at the Lincoln Club was not one of substance. He stressed the need for permanent tax cuts and entitlement reform, and took a thoughtful approach to the Iraq crisis. ''There's going to be a day after'' the United States leaves Iraq, he said, and that requires concentration on ''what is America's role in the world.'' Without naming names, he suggested that as the nation's problems are growing, political leaders ''are getting smaller.''

Surprisingly for such an experienced performer, however, Thompson had trouble with the podium microphone as his low, conversational tones faded in and out. He ended his speech on a downer by reporting a recent visit to 6-year-old schoolchildren and what they had told him. Thompson worried that the long Lincoln Club program preceding his speech may have turned off the audience, but he may have been the one who lost his enthusiasm.

The Fred Thompson whose vigorous style has led many prominent Republicans to await his announced candidacy was not present at the Balboa Bay Club. He wants a touch of ''populism'' in the GOP, and is sure Republican corruption and profligate spending in Congress caused the 2006 election defeat. But there was none of that in what he said here.

Nor did the thoughtful Thompson who stakes out his own positions and prepares them carefully emerge here. He recently has written forceful pieces for National Review Online taking issue with conservative Ramesh Ponnuru on federalism and leftist Michael Moore on Cuba (spawning a flood of Internet comments, mostly favorable, about Thompson).

Thompson is considering a different kind of presidential candidacy, for example, staying several days at a crack in Iowa instead of zipping in and out. But his debut speech here as a putative presidential candidate was ordinary. It will be revealing how much he changes his approach in forthcoming non- candidate speeches to Republican gatherings in Virginia and Connecticut.