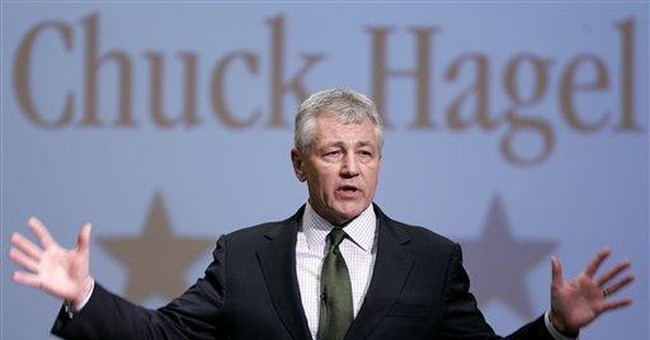 WASHINGTON -- Sen. Chuck Hagel returned from his fifth visit to Iraq to join Senate Democrats last Thursday as one of two Republicans voting to begin withdrawal of U.S. troops from Iraq. It was not an easy vote for a conservative party regular and faithful supporter of President George W. Bush's non-Iraq policies. A few days earlier, Hagel sat down with me to paint a bleak picture of the war and U.S. policy.

Over a dozen years, I have had many such conversations with Hagel not for quotation. This time, I asked him to go on the record about his assessment of what the "surge" has accomplished. In language more blunt than his prepared speeches and articles, he described Iraq as "coming undone," with its regime "weaker by the day." He deplored the Bush administration's failure to craft a coherent Middle East policy, blaming the influence of Deputy National Security Adviser Elliott Abrams.

Hagel faces a political paradox as he ponders a career decision -- to run for president, seek re-election next year or get out of elective politics. His harsh assessment resonates with many Republicans who believe Bush's war policy has led the party to disaster. Yet, this message faces rejection by GOP primary voters, and he is under attack from the Right at home in Nebraska (with 38-year-old state Atty. Gen. Jon Bruning threatening to run against him).

After his latest visit to Baghdad, Fallujah, Ramadi and Anbar Province, Hagel told me: "This thing is really coming undone quickly, and [Prime Minister Nouri al-]Maliki's government is weaker by the day. The police are corrupt, top to bottom. The oil problem is a huge problem. They still can't get anything through the parliament -- no hydrocarbon law, no de-Baathification law, no provincial elections [needed to bring Sunnis into the governing process]."

The regional problem, as described by Hagel, is a U.S. policy breakdown with a failure to engage Iran and Syria. "I do know that there are a number of Israelis who would like to engage Syria," said Hagel. "They have said that Elliott Abrams keeps pushing them back." He quoted foreign ministers, ambassadors and former U.S. officials as saying they believe Abrams "is making policy in the Middle East."

Hagel certainly is no peace-now zealot. "We're not going to precipitously pull out," he told me. "We have [national] interests in Iraq." While he asserted "we can't get out by the end of the year," he called for "pulling some of our guys out -- not all of them, but you've got to get them out of [Baghdad] at least, get them out of the middle of civil war." If not, Hagel said, "then the prospects of the Republican Party are very dim next year."

What about claims by proponents of the Iraqi intervention that failure to stop the terrorists in Iraq will open the door to them in the American homeland?

"That's nonsense," Hagel replied. "I've never believed that. That's the same kind of rhetoric and thinking that neo-cons used to get us into this mess, and everything that [Donald] Rumsfeld, [Paul] Wolfowitz, [Richard] Perle, [Douglas] Feith and the vice president all said. Nothing turned out the way they said it would."

It is "nonsense," Hagel said, because "Iraq is not embroiled in a terrorist war today." A member of the Senate Intelligence Committee, he cited "national intelligence" attributing "maybe 10 percent of the insurgency and violence" to al Qaeda. Indeed, he described Shias, Sunnis and Kurds as opposed to al Qaeda: "They don't like the terrorists. What's happened in Anbar Province is the tribes are finally starting to connect with us because al Qaeda started killing some of their leadership and threatening their people. So the tribes now are at war with al Qaeda."

"So," said Hagel, "when I hear people say, 'Well, if we leave them to that, it will be chaos.' What do you think is going on now? Scaring the American people into this blind alley is so dangerous."

These judgments come from someone credited with rebuilding Nebraska's Republican Party who has a lifetime American Conservative Union record of 85.2 percent. Hagel represents millions of Republicans who are repelled by the Democratic personal assault on President Bush but deeply unhappy about his course in Iraq.