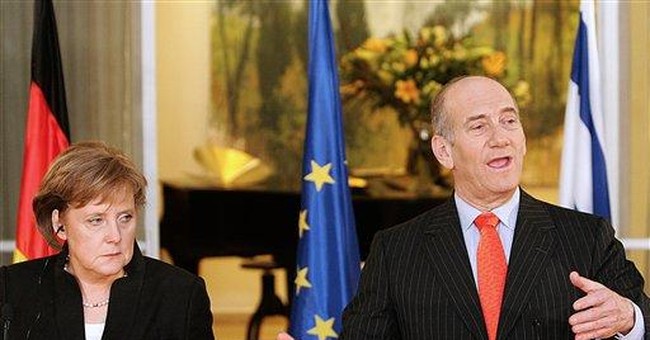 JERUSALEM -- An overriding melancholy here this Holy Week follows Secretary of State Condoleezza Rice's mission to Jerusalem the previous week. To Arabs and Jews seeking meaningful peace negotiations, it confirmed no progress toward a two-state solution between Israelis and Palestinians is likely for the remainder of George W. Bush's presidency.

Israeli Prime Minister Ehud Olmert rejected Rice's offer for her to participate in Israeli-Palestinian negotiations for a permanent peace treaty. The word in the Olmert government is that the prime minister's reluctance even to begin talks at this time is fully shared by President Bush. Rice is sincere in her desire for peace, but she can accomplish nothing important without the full support of her chief.

The aphorism (originated by Israeli statesman Abba Eban) that the Arabs "never miss an opportunity to miss an opportunity" now can be applied to Israel. The Riyadh Declaration indicated willingness of the Arab world to consider a peaceful solution. Now, belief here among peace-seekers is that nothing will happen until a new president enters the Oval Office in 2009.

That was the consensus Tuesday at a conference on Middle East policy held in Jerusalem by the Morley Institute of Washington in which I took part. Deal W. Hudson, the institute's executive director, expressed hope that Bush might yet grasp the reins of peace while he is still in office. But a diverse assemblage of Palestinians (both Muslim and Christians), Israelis, Americans and other foreigners held little hope for a Bush initiative in the closing months of his regime.

The atmosphere has changed since I was here for Holy Week a year ago. Israeli self-confidence then was at a peak, with the newly installed Olmert openly avowing the unilateral solution to the Palestinian problem developed by his predecessor, Ariel Sharon. Behind that posture was confidence in military superiority. The unhappy results of the Lebanon incursion have modified Israeli expectations and caused a different tone. Olmert publicly indicates a willingness to talk, and the Haaretz newspaper quoted him as saying the Arabs' Riyadh summit "is evidence of a change."

But the moderates attending Tuesday's conference viewed this as rhetoric. Olmert told Rice here last week that any negotiations must be preceded by the release of the Israeli soldier seized by Hamas fighters last June 25.

The broader pre-conditions for talks are Olmert's refusals to include in negotiations any discussion of a return of Arab refugees to greater Palestine and a withdrawal of Israel to its 1967 borders. Negotiating those points does not mean that they will be conceded. Indeed, Bush in 2004 assured Sharon of U.S. guarantees against a massive return of Palestinian refugees or a rollback to unsafe borders. But setting pre-conditions for talks is a classic mechanism for escaping talks altogether.

Indeed, Olmert continues a boycott policy against the Palestinian Authority because of Hamas' election victory and Ismail Haniyeh as prime minister. The presence of Hamas in the Palestinian government is cited as justification for the absence of anybody from the negotiating table.

It surely is up to Bush. When Rice made her previous visit to Israel about six weeks ago, it was announced by the Israeli government that Olmert had been on the phone with Bush a day earlier and that they "see eye-to-eye." That insured the three-cornered talks in Jerusalem between Rice, Olmert and Palestinian Authority President Mahmoud Abbas would accomplish nothing substantial.

Haaretz political columnist and editorial writer Akiva Eldar, a speaker at Tuesday's conference, wrote in Monday's newspaper: "As a rare and historic opportunity appears on the horizon, a leadership of different dimensions is needed." He was talking about Olmert, but he could have referred to Bush as well.

Nothing could be accomplished now without Bush pressuring Olmert. Bush's original intentions to broker Israeli-Palestinian peace were sidetracked by the 9/11 attack and subsequent U.S. military operations. The many American presidential candidates of both parties do not want to take risks on this issue. A mere statement of sympathy for the Palestinians by Sen. Barack Obama brought massive criticism. The question is whether Eldar's "historic opportunity" will be gone when a new American president takes office.