Thompson Is for Real 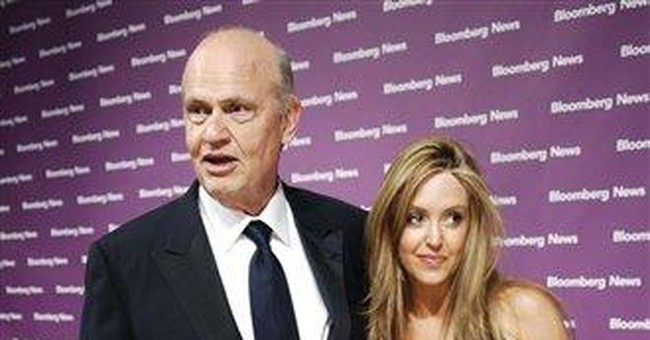 WASHINGTON -- In just three weeks, Fred Thompson has improbably transformed the contest for the Republican presidential nomination. It is not merely that he has come from nowhere to double digits in national polls. He is the talk of GOP political circles, because he is filling the conservative void in the Republican field of candidates.

Republican activists have complained for months that none of the big-three contenders -- Rudy Giuliani, John McCain and Mitt Romney -- fits the model of a conservative leader for a conservative party. The party faithful have been waiting for another Ronald Reagan. But in conversations with them the past year, nobody mentioned Thompson as the messiah until he appeared March 11 on "Fox News Sunday with Chris Wallace."

His statement to Wallace that he was "giving some thought" to a presidential run generated a reaction that surprised Thompson. In the first Gallup poll that listed Thompson (March 23-25), he scored 12 percent -- amazing for someone out of public life for more than four years who has not campaigned. More important than the polling data is his backing within the political community. Buyer's remorse is expressed by several House members who had endorsed former Massachusetts Gov. Romney.

Thompson's popularity reflects weakness among announced Republican candidates, as reflected in the Gallup survey. Sen. McCain, no longer an insurgent but still not accepted by conservatives, is stuck in the 20-25 percent range. Former New York City Mayor Giuliani has dropped precipitously from 44 percent to 31 percent, amid attacks on his ideology and personal life. Most startling, despite a well-financed, well-organized campaign, Romney has fallen to 3 percent.

Sophisticated social conservative activists tell me they cannot vote for Giuliani under any conditions and have no rapport with McCain or Romney. They do not view Sen. Sam Brownback, representing the social right, as a viable candidate. They are coming to see Thompson as the only conservative who can be nominated. Their appreciation of him stems not from his eight years as a U.S. senator from Tennessee but his actor's role as district attorney of Manhattan on "Law and Order." That part was molded to Thompson's specifications as a tough prosecutor, lending him political star power.

Thompson's political origin as a protege of Sen. Howard Baker, leader of the Tennessee GOP's more liberal wing, prompted hard-line Senate conservatives to consider him a little too liberal. Actually, his lifetime Senate voting record as measured by the American Conservative Union was 86 percent. It would have been close to 100 percent except for his repeated votes supporting McCain's campaign finance reform. None of the big-three Republicans has been so consistently conservative as Thompson on tax policy, national security and abortion.

The principal complaint about Thompson concerns not his ideology but his work ethic. The rap is that he does not burn the midnight oil -- the identical criticism of Reagan, before and during his presidency. That carping may betray resentment that Thompson has emerged as a full-blown candidate without backbreaking campaign travel and tedious fund-raising.

Thompson's critics assert that, bored with his lucrative career as an actor, he has enjoyed his 15 minutes of fame created by a chance TV interview and will not really run. But he privately assures friends that this is for real. His performance on "Fox News Sunday" was no accident. He went on the program for the purpose of unveiling his possible candidacy.

Thompson did not leave public policy when he left the Senate. He has served on the U.S.-China Economic and Security Review Commission. He hardly knew Scooter Libby but felt he was getting a raw deal, appeared in his courtroom and helped raise money for his defense fund.

Friends bet Thompson will run. He clearly wants to try, and his wife, Jeri, is all for it. Seeking the best timing, he wants to avoid the pitfalls encountered by Democrat Barack Obama, who may have damaged himself by starting his campaign too quickly.

I met Fred Thompson in 1974 as Howard Baker's 31-year-old minority counsel on the Watergate investigation. I considered him cool, careful and conservative. He still is, and that is how he would run for president, which appears in the offing.