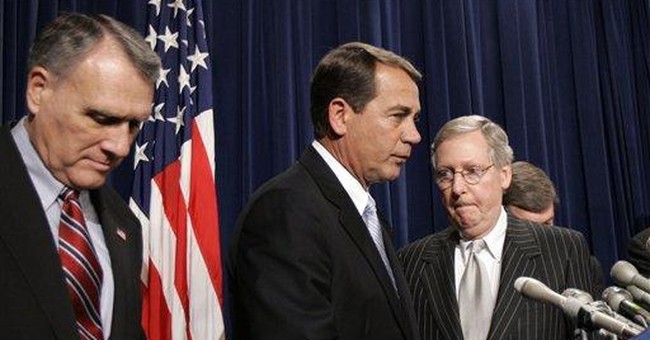 Hoyer earlier had threatened rules changes limiting efforts of the Republican minority to alter legislation through "recommittal" votes at the end of debate. If that happens, Boehner told Hoyer, look for Republicans to delay the appropriations process and bring the House's work to a standstill.

House Republicans have experienced some success this year by exercising the minority party's traditional right to recommit a bill to its originating committee. Most recently, it prevented passage of a bill authorizing a House member for the District of Columbia through a recommittal motion repealing the capital city's restrictive gun law. Hoyer then warned that Democrats will impose a new requirement of germaneness on such motions.

Hayden talked to Rep. Henry Waxman, whose Oversight and Government Reform Committee conducted the hearing, and Rep. Silvestre Reyes, the Intelligence Committee chairman. Waxman the next day quoted Hayden's description of Plame's status with the agency after the CIA's repeated refusal to discuss this subject with Republican chairmen before the 2006 election.

Hayden, a career Air Force officer, has assured complaining Republicans he is not a Democrat. However, these Republicans speculate that Hayden is angling to move a step up as Director of National Intelligence (DNI) under a Democratic president who might be elected in 2008.

The Senate's top two Republicans, Minority Leader Mitch McConnell and Minority Whip Trent Lott, voted against their GOP colleagues Wednesday on a motion to cut extraneous spending from the Iraq emergency appropriations bill. They did so to help Sen. Norm Coleman, who faces a tough run for re-election from Minnesota next year.

The motion by reform Sen. Tom Coburn would have eliminated $100 million to provide security for the 2008 national party conventions. With Republicans meeting in Minneapolis, Coleman (a former mayor of St. Paul) made a strong pitch to retain the money.

The Coburn amendment was supported by 37 of the 49 Republican senators. But McConnell and Lott opposed it for Coleman's sake. It lost, 51 to 45.

Teresa Heinz Kerry last Tuesday sent out an e-mail to her husband's political list. She bragged that the book had soared in one day from 3,398th on Amazon.com to No. 139.

"This huge first day of sales shows that Americans really care about the environment," said Mrs. Kerry, who then issued this plea: "Please, come check it out -- write a review -- share your thoughts about environmental heroes you know -- and spread the word to your friends and neighbors." By Thursday afternoon, the book had reached 13th place on Amazon.com.

With Republican Sen. Arlen Specter of Pennsylvania making an unusually early announcement of intent to seek re-election in 2010, conservative Republicans who nearly defeated him in 2004 are flying the white flag.

Conservative Rep. Pat Toomey, who now heads the Club for Growth, came within 18,000 votes of defeating Specter in the 2004 primary. But the resounding defeat of conservative Sen. Rick Santorum in Pennsylvania last year inhibits desires to challenge Specter again.

Specter antagonized the Right this year by voting to allow Transportation Security Administration (TSA) employees to unionize, and he earlier voted for higher tobacco taxes. But as Senate Judiciary Committee chairman, Specter managed the Supreme Court confirmation of conservatives John Roberts and Samuel Alito. That emboldened him to appear at the Conservative Political Action Conference (CPAC) last month in Washington.