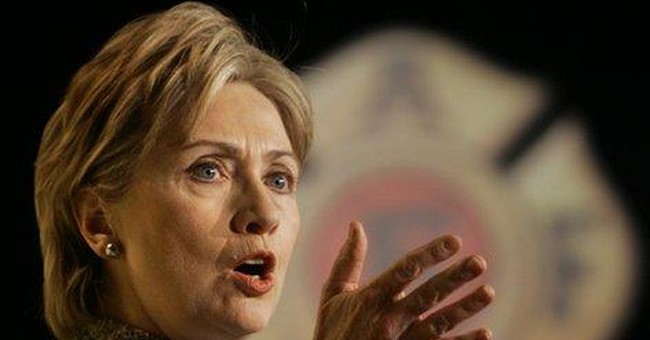 In Tennessee Republican politics, former Sen. Thompson was allied with Howard Baker and Lamar Alexander in the state party's more liberal wing. However, his voting record in the Senate was solidly conservative. He is viewed by the Christian right as more acceptable than any of the three Republican candidates leading in the polls -- Rudy Giuliani, John McCain and Mitt Romney.

Nobody is sure that Thompson really will run. He has been reported in line as successor to radio commentator Paul Harvey to fill one of the most prestigious and profitable broadcasting niches.

Leading Democrats have stayed away from Wilson since a Senate Intelligence Committee report in 2004 discredited him. Blumenthal was known as a vicious attack man when he worked as an aide to President Bill Clinton late in his administration.

Clinton's choice of dining companions casts doubt on her attempted image modification into a centrist Democrat who wants to avoid the politics of personal destruction.

Rep. Rahm Emanuel was vexed when Sen. Chuck Schumer appeared to take credit for investigating the Justice Department's dismissal of U.S. attorneys. "At the very beginning, I was clear that something didn't smell right," Schumer told a Tuesday press conference.

Emanuel, who is not a lawyer, actually led all Democrats in focusing on the purge of federal prosecutors who had been pursuing public corruption charges. He and Schumer respectively led the House and Senate Democratic campaign committees last year as their party took control of Congress. Emanuel is now chairman and Schumer vice chairman of the party caucuses in their respective chambers.

While Schumer called for the resignation of Attorney General Alberto Gonzales, Emanuel took the House floor with a different position. While "many are eager to debate" Gonzales's future, said Emanuel, "we must not lose sight of the real story -- what is happening to these ongoing public corruption investigations."

Reform Republican House members, expecting rousing pep talks in preparation for debate on the supplemental appropriations bill funding the war in Iraq, were disappointed how passive their leaders were at Tuesday's closed-door party conference.

Minority Leader John Boehner and Minority Whip Roy Blunt did not exert much energy in pressing for defeat of the money bill. That measure not only puts a Democratic stamp on distribution of Iraq war funds, but adds unrelated spending items picked by the Democrats.

Surprisingly, a sterling call to action at the conference was issued by Rep. Jerry Lewis, ranking Republican member of the House Appropriations Committee. Normally known for deal-making with Democratic appropriators rather than partisan combat, Lewis called for Republicans to vote against the supplemental bill.

The biggest Washington area fund-raiser for Republican presidential candidate Rudy Giuliani will be a reception the evening of March 22 at millionaire lobbyist Peter Terpeluk's mansion in suburban Chevy Chase, Md.

Terpeluk, who served for four years as ambassador to Luxembourg after being named by President George W. Bush, is one of several Bush backers across the country recruited by Giuliani. Lou Cordia, a longtime Republican political operative in Washington who started in the Reagan administration, is managing the fund-raiser.

Cordia's solicitation requests contributions of up to $4,600 for an individual or $9,200 for a couple to attend the reception. As a sign that the money is slow rolling in, one major Washington contributor who is not yet committed to a presidential candidate has received four telephone calls and two e-mails soliciting for the Giuliani event.