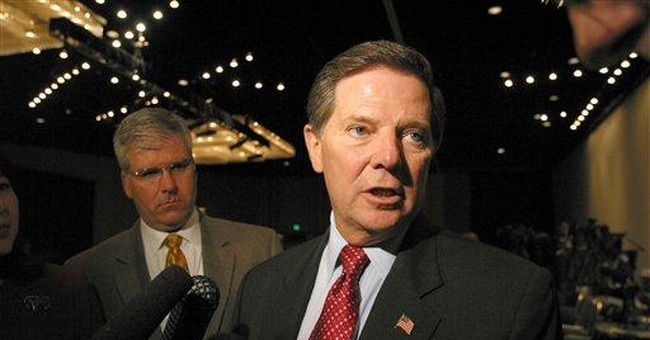 WASHINGTON -- Newt Gingrich's attempted phoenix-like rise from his own political ashes to a presidential candidacy next week will run into a harsh assessment by his former House Republican colleague, Tom DeLay. The former majority leader's memoir assails Gingrich as an "ineffective" House speaker with a flawed moral compass.

Gingrich is not the only erstwhile political ally to feel DeLay's wrath. In "No Retreat, No Surrender: One American's Fight," DeLay is even more critical of his predecessor as majority leader, Dick Armey, and assails George W. Bush for being more compassionate than conservative. Even DeLay's handpicked speaker succeeding Gingrich, J. Dennis Hastert, is accused along with Gingrich and Armey of opening the door to the Democratic purge of him.

DeLay is an angry man after being driven from the leadership, from Congress and, so far, from public life by "a concerted effort to destroy me legally, financially and personally" through a 2005 indictment in Texas. DeLay's response to Democratic District Attorney Ronnie Earle is familiar. What is unusual are his claims that "pre-existing tensions I had with Gingrich and Armey" partially explain their role in kicking DeLay out of the leadership.

DeLay admits that the team of Speaker Gingrich, Majority Leader Armey and Majority Whip DeLay, empowered by the 1994 elections, "were not a cohesive team, and this hindered our ability to change the nation." He puts most blame "at Newt Gingrich's door."

In describing Gingrich as an "ineffective Speaker," DeLay writes: "He knew nothing about running meetings and nothing about driving an agenda." He adds: "Nearly every other day he had a new agenda, a new direction he wanted us to take. It was impossible to follow him."

DeLay also declares "our leadership was in no moral shape to press" impeachment against President Bill Clinton. Writing well before Gingrich's admission for the first time last week, DeLay asserts: "It is now public knowledge that Newt Gingrich was having an affair with a staffer during the entire impeachment crisis. Clearly, men with such secrets are not likely to sound a high moral tone at a moment of national crisis."

DeLay refers to Armey as "so blinded by ambition as to be useless to the cause," a "poor leader" who had "few fresh ideas." He adds that Armey "resented anyone he thought might get in the way of his becoming speaker of the House. Beware the man drunk with ambition." His version of the failed 1997 coup attempt against Gingrich pleads innocence and accuses Armey, after realizing he would not succeed Gingrich, of telling the speaker that DeLay was plotting against him: "He had lied to cover his ambitions, betraying both his movement and his fellow leaders."

DeLay is angry that, under Democratic and news media pressure, Republicans retreated from a rule that an indicted House Republican need not resign from the leadership if indicted in a politically motivated prosecution. Gingrich and Armey (both out of Congress) opposed that rule. More significantly, to DeLay's dismay, so did his former lieutenant, Speaker Hastert.

The memoir ends DeLay's reticence in criticizing President Bush. Deriding Bush's self-identification as "a compassionate conservative," DeLay asserts "he has expanded government to suit his purpose, especially in the area of education. He may be compassionate, but he is certainly no conservative in the classic sense." He also charges that Bush has failed to stress the role of the U.S. troops fighting in Iraq, adding, "typically . . . no one at the White House was listening" to his advice.

Prior to next week's publication of blunt comments in his memoir, DeLay has been a subject of controversy on the right. When American Conservative Union (ACU) chairman David Keene attempted to make DeLay the organization's Washington operative, four members of his board resigned. Rep. Jeff Flake of Arizona, a leading conservative reformer, describes DeLay's leadership as concentrating on redistricting, fund-raising and distribution of pork.

Notwithstanding Flake's criticisms, DeLay was the most conservative congressional leader I have witnessed in 50 years covering Capitol Hill. I rate him with Lyndon B. Johnson as a dominant legislator. But his revelation that GOP leaders did not constitute a band of brothers helps explain why 12 years of control produced much less than was anticipated.

Correction: Monday's column incorrectly identified the bill that Barry Goldwater voted against in 1964 as the Voting Rights Act, when it actually was called the Civil Rights Act.