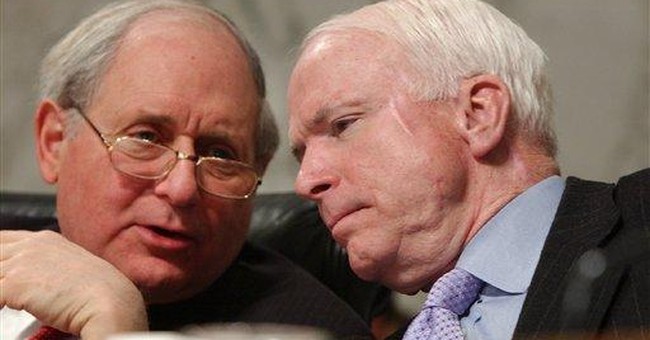 WASHINGTON -- Democratic senators this week will face trouble trying to cleanse themselves of the stain left by voting for President Bush's Iraq war resolution. Republican senators who have turned against U.S. military intervention in Iraq are not interested in bailing out Democrats by approving their proposal to repeal the 2002 authorization passed overwhelmingly by Congress.

As Congress returns this week from the year's first recess, authorization repeal is supposed to be attached to the bill containing homeland security recommendations by the 9/11 commission. But Sen. Norm Coleman, who has become prominent among Republican critics of Bush's war policy, told me from his home state of Minnesota that he would oppose the de-authorization and predicted no more than two Republican senators would vote for it.

One of those two Republican senators would have to be Chuck Hagel, who has fearlessly critiqued Bush war policy. But he told me from Nebraska that he would not be inclined to support repeal. If Hagel is lost, Democrats might fall short of the 50 senators necessary for final passage, much less the 60 senators necessary to close off debate. George W. Bush may be an unpopular president fighting an unpopular war, but Democrats are finding it hard to make war policy from Capitol Hill.

Democrats do not cloak the political nature of their efforts. Senate Foreign Relations Committee Chairman Joseph Biden, participating in a Nevada forum for Democratic presidential candidates last week, exultantly announced his intent to "revoke the president's authority that he was given . . . to go to war [cheers and applause]." The new mantra is not limited to presidential hopefuls who are senators. On the New Hampshire campaign trail, New Mexico Gov. Bill Richardson called for de-authorization.

De-authorization follows a series of frustrations for Democrats. Biden, having regained the Foreign Relations chairmanship after the 2006 elections, pushed a harshly worded, though non-binding, anti-war resolution that went nowhere. A milder bipartisan measure fell short of 60 votes needed for cloture. Democratic backing for a plan to condition funding Bush's surge of troops dropped off when its sponsor, Rep. John Murtha, bragged that troops in the field "won't have the equipment" under his plan.

As Congress began its break a week ago, Biden and Senate Armed Services Committee Chairman Carl Levin looked to events 37 years ago. A 1964 resolution (passed with only two dissenting senators) gave President Lyndon B. Johnson his requested free hand in Vietnam because of a trumped up attack on a U.S. naval vessel in the Tonkin Gulf. It was repealed in 1970 as an amendment to a non-controversial bill.

But as is true with most Iraq-Vietnam analogies, de-authorization of the Tonkin Gulf resolution bears little resemblance to what is being contemplated today. President Richard M. Nixon began pulling U.S. combat troops out of Vietnam soon after he took office in 1969, and offered no objection to repealing the LBJ resolution. It passed the Senate 81 to 10 in 1970, with unanimous support from Republican senators.

In contrast, the proposed 2007 de-authorization looks like a Democratic escape from the wrath of the anti-war party faithful. Of the 29 Democrats who voted for Bush's war resolution over four years ago, 21 are still in the Senate, seven are up for re-election next year, and three -- Biden, Christopher Dodd and Hillary Clinton -- are running for president.

After checking with anti-war Republicans on recess last week, I found that several who had favored a non-binding resolution rejecting Bush's policy are loath to give Democrats an Iraq get-out-of-jail-free card. An exception was Sen. Gordon Smith of Oregon, who indicated he might favor de-authorization but never would cut off funds. However, Coleman told me: "I don't see us going back and rewriting history." Similarly, Hagel said: "We are not going back and rewind every decision we made."

Hagel's position is critical. Before the recess, Biden and Levin sought support from the conservative Nebraska Republican who had been one of only two Republicans supporting their tough non-binding resolution. Hagel long has been appalled by Bush's war policy, but he is rightly suspicious of Democratic ploys with no impact on dire conditions in Iraq.