GOP's Lack of Will 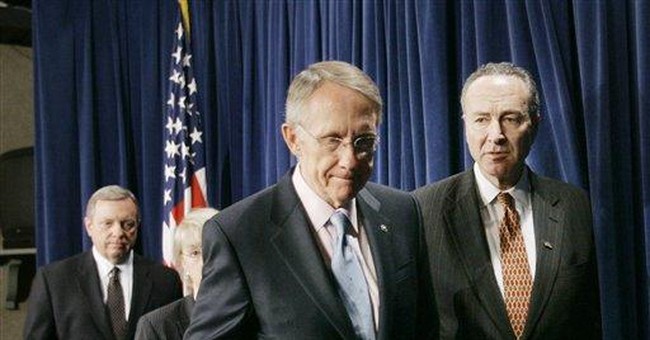 WASHINGTON -- The Senate Republican leadership met behind closed doors this week to ponder Majority Leader Harry Reid's audacious power grab on the massive catchall appropriations bill. They decided they could not filibuster the bill for fear of being blamed for closing down the government, but they still wanted enough votes opposing cloture to make an impression. That would seem a formula for defeat, and indeed it was.

The cloture vote to end debate on the bill Tuesday was 71 to 26, with 23 Republicans -- including the party's two leaders -- voting with Reid. The GOP was accepting a bill that perpetuates earmarks, masks additional domestic spending under the disguise of fiscal responsibility, and establishes a precedent of prohibiting the opposition party from amending an appropriations bill.

The Republican defeat would have been a plausible outcome if Democrats held a commanding Senate majority, even as large as their edge in the House. In fact, the Senate margin is 51 to 49, with Sen. Tim Johnson of South Dakota hospitalized and Sen. Joe Lieberman of Connecticut barely a Democrat. What ails Senate Republicans is lack of principle and lack of will, two reasons why they lost the 2006 elections.

At issue are nine appropriations bills, totaling $465 billion, left over from the Republican-controlled Congress. Democrats claimed to propose a continuing resolution (CR) -- keeping spending level while beginning work on a new round of money bills for the next fiscal year. But it was not really a CR. It was an omnibus appropriations bill changing money levels.

After the bill passed the House under procedures that prevented any serious attempts at amendment, Republican Sen. Tom Coburn of Oklahoma went to the floor as the Senate's leading spending watchdog. He said that "to make the claim that there are no earmarks in this bill is an outright falsehood that the American people should not accept." He added: "There's no transparency with these earmarks. Most Americans will never know how they got there. The lobbyists will know, the members [of Congress] will know, the campaign checks that come from them will know, but the regular American Joe won't know."

Earmarks aside, Coburn declared it is "a lie" that "we stay within the budget" in the omnibus bill because $3.1 billion in Defense funds have been transferred to domestic programs. He correctly predicted that this money will be appropriated for Defense again in the next supplemental money bill "for things that absolutely have to happen with our troops." So, the omnibus actually represents a spending increase.

Finally, an HIV testing program for pregnant women sponsored by Dr. Coburn, a physician, has been eliminated. That looks like vindictiveness toward Coburn, whose campaign against excessive spending has antagonized colleagues on both sides of the aisle. To call his broad-based "baby AIDS testing" program an earmark betrays animus.

But a proposal to restore money for popular HIV testing or any other amendment cannot be offered because of a parliamentary ploy by Reid. The arcane technique of "filling the tree" with superfluous amendments, first used a quarter of a century ago by a Republican majority leader (Howard Baker), prevents any changes being offered on the Senate floor and has contributed to degeneration of the Senate as a deliberative body. In his brief tenure as majority leader, Reid has filled the amendment tree twice -- first on the Iraq resolution and now on the omnibus money bill. Never before had this been done on an appropriations bill.

That left Republicans with these options: bow to Reid, or block the money bill with a filibuster as today's [Feb. 15] deadline for funding the government approached. But Republicans have never quite recovered from their political disaster in the 1995 shutdown of government and do not want a repetition. Thus, Minority Leader Mitch McConnell and Minority Whip Trent Lott, while deploring Reid's tactics, voted for cloture on Tuesday -- the white flag of surrender.

Republican sources say the leadership did not want to hurt senators facing uphill re-election contests in 2008 by risking a government shutdown. That is an admission of weakness by the Republican minority as the new Congress begins. With only 49 unadulterated Democrats in their seats, Harry Reid showed he could stare down the GOP.