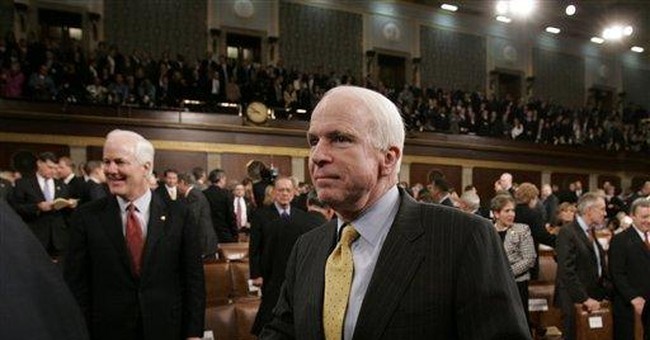 Democratic strategists who had feared Sen. John McCain as the potentially unbeatable Republican candidate for president in 2008 were surprised and delighted by his dour appearance on NBC's "Meet the Press" last Sunday.

One Democratic leader referred to McCain's performance, in suggesting President Bush's additional 21,000 troops may be inadequate, as "comatose." A Republican adviser to McCain said it was one of the worst performances ever on "Meet the Press." The senator's defender said he could not be expected to be cheerful about a plan to send additional U.S. troops in harm's way.

Sources close to Sen. Barack Obama are sure that Rep. Rahm Emanuel will not support his fellow Illinois Democrat for the presidential nomination but will back Sen. Hillary Rodham Clinton.

If so, Emanuel would be the only prominent Democratic officeholder in Illinois not for Obama. As a senior White House aide, Emanuel was one of President Bill Clinton's favorites. Emanuel has been close to both of the Clintons.

Emanuel refuses to talk about his 2008 presidential choice. He says he was deeply engaged in politics for two years as chairman of the Democratic Congressional Campaign Committee and in his new role, as House Democratic Caucus chairman, he is committed to legislation.

TheVanguard.org is intended to be a right-wing version of the leftist MoveOn.Org. It was founded by Silicon Valley entrepreneurs, including Gil Amelio, former CEO of Apple and National Semiconductor.

Coming on board Feb. 16 as TheVanguard's full-time editorial and creative director will be Richard Poe, who has served as editor-in-chief of FrontPage Magazine. He has been described as the conservative movement's leading expert on MoveOn.Org's strategy in bringing together disparate elements with a common viewpoint.

President Bush extended his stay at Camp David last weekend to arrive back at the White House Monday afternoon, missing the annual anti-abortion March for Life that morning in Washington to mark the anniversary of the Roe v. Wade decision.

A footnote: Only two of the many Republican presidential hopefuls attended this year's March for Life: Rep. Duncan Hunter of California and Sen. Sam Brownback of Kansas. On Sunday, Brownback visited the Holiday Inn on Capitol Hill, mingling with marchers from Iowa (the first state in the presidential nomination process).

Texas Republican contributors are being solicited to spend $30,000 for dinner with former New York City Mayor Rudolph W. Giuliani at the Houstonian Hotel in Houston Feb. 1 to finance his "presidential exploratory committee." The "private" dinner will follow a 6:30 to 8 p.m. cocktail reception, costing $2,100 a person and $4,200 for couples.

A footnote: A Giuliani fund-raiser will be held Jan. 29 in Pacific Palisades, Calif., at the home of Bill Simon, the 2002 Republican candidate for governor of California, costing $2,300 a person and $4,600 per couple.

To find out more about Robert D. Novak and read his past columns, visit the Creators Syndicate web page at www.creators.com. COPYRIGHT 2007 CREATORS SYNDICATE INC.
Here's Why the Liberal Media Got Scalped With Their Rudy Giuliani Coverage
Matt Vespa
Why a Reporter Suggested That Fox News be Stripped Of Its First Amendment Protections. It's Eye-Roll Worthy.
Matt Vespa
The Latest Round of Attacks on Ron DeSantis Have Gone From 'Desperate to Weird'
Katie Pavlich
Longtime Detroit Police Chief is Running Against Michigan Governor Gretchen Whitmer
Katie Pavlich
Disney is the Latest Corporation Called Out By Whistleblower Employees Over 'Diversity and Inclusion' Program
Rebecca Downs
Trump Has His Eyes on 'One of the Highest Priorities' for Primary Races
Rebecca Downs