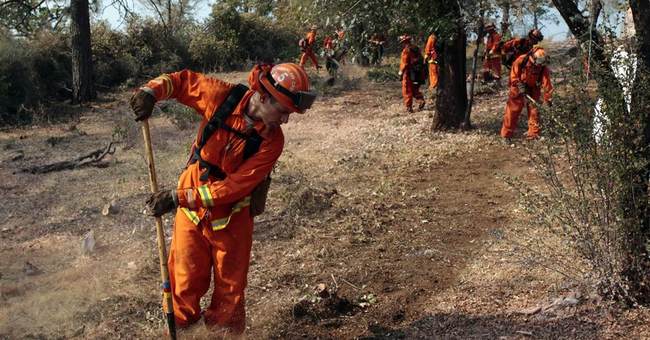 Now that an unusually cold spring is giving way to warmer weather and Earth Day is behind us, it’s a good time to revisit the campaign to turn us all into progressive environmentalists.

Just as the word “liberal” has been abandoned in favor of the less-tarnished “progressive,” it’s harder than it used to be to find “global warming” in environmental groups’ materials.

The operative phrase is “climate change,” and it’s a reality if you’re in Colorado’s Rocky Mountains, where the overheated Earth in mid-April deposited three feet of new snow. Talk about a sudden change in climate, when Coloradans were just getting their flippers out and putting the snowboards in storage.

Like the global warming crowd’s movement toward ever more labored explanations for why the weather isn’t behaving according to Al Gore’s scary computer-model scenarios, Earth Day itself keeps evolving. It began in 1970 as a well-meaning conservation effort, and even inspired some needed laws to clean up the air and rivers.

But like a baby T-Rex, it grew teeth, got big and powerful (see: Environmental Protection Agency) and began stalking prey, such as coal miners and the vulnerable young. Today’s schoolchildren are so hyped on “green” propaganda that it’s not hard to imagine them happily turning in their non-recycling parents to the Green Police like Cuban tots ratting on their elders for secretly reading Milton and Rose Friedman’s Free to Choose.

Driven by fanatics, environmentalism has gone beyond being a cause and has morphed into a pagan religion. This year’s Earth Day theme is “The Face of Climate Change.” We’re all supposed to upload photos of ourselves while pledging our fealty to saving the planet. It’s Facebook gone wild.

Here’s an early take on Earth Day by famed anthropologist Margaret Mead, who, some evidence suggests, was fooled by mischievous Samoans into writing a best-selling book that exaggerated “free love” among adolescents.

An International Chairman of Earth Day, Ms. Mead wrote in the EPA Journal of March 1978:

"Earth Day is the first holy day which transcends all national borders, yet preserves all geographical integrities, spans mountains and oceans and time belts, and yet brings people all over the world into one resonating accord...”

There’s yet more: “… EARTH DAY attaches no local or divisive set of symbols, no statement of the truth or superiority of one way of life over another."

Really? How about the implied sideswipe at Western Civilization and Christendom, in which she grew up and which spawned her freedom to get grants in order to study hapless Samoans? Her claim is not only ungracious but inaccurate. Earth Day is emblematic of the Earth religion, which has a decidedly strong sense of superiority of its vision. If you don’t believe it, here’s the first stanza of the “Earth Day Anthem,” set to the tune of Beethoven’s “Ode to Joy”:

For contrast from the world of old-time religion, here’s the first stanza of “Joyful, Joyful, We Adore Thee,” written by Henry van Dyke in 1907 and found in most hymnals:

Joyful, joyful, we adore Thee, God of glory, Lord of love;
Hearts unfold like flowers before Thee, opening to the sun above.
Melt the clouds of sin and sadness; drive the dark of doubt away;
Giver of immortal gladness, fill us with the light of day!

There’s a clear line between worshiping the Creator and mistakenly worshiping the creation, and it’s not a new error. In the first chapter of the book of Romans, the apostle Paul warned nearly 2,000 years ago about humanity’s penchant for this:

“[A]lthough they knew God, they did not glorify Him as God, nor were thankful, but became futile in their thoughts, and their foolish hearts were darkened. Professing to be wise, they became fools…and worshiped and served the creature rather than the Creator….”

Besides pining for global governance and an end to coal- and oil-based energy and its many industrial products, Earth Day’s backers continue to insist that destroying fossil fuel-based energy plants and sinking yet more billions into loser companies like Solyndra and Fisker Automotive will turn things around and – get this – create jobs.

In a 2011 fact sheet, “Energy Efficiency Creates Jobs,” the Natural Resources Defense Council claimed that, “For every fossil fuel job made unnecessary by energy efficiency, up to 50 new jobs are created across California’s diverse economy.”

Apparently, not enough fossil fuel jobs have been wiped out and replaced by people making windmills and solar panels. With California sporting the nation’s most progressive environmentalist agenda, unemployment has hovered around 12 percent for the past three years, with businesses leaving the state for friendlier, if not “greener” pastures. It’s beyond ironic that Anaheim-based Fisker’s very first –and doomed – electric car line is named the Karma. What goes around, comes around.

Earth Day is fine when it comes to planting trees, cleaning up parks and streams and renewing a commitment to good citizenship. It goes off track when it strays from conservation into worship.

For the antidote to the Earth worship nonsense, the second verse of Henry van Dyke’s marvelously uplifting hymn points upward:

All Thy works with joy surround Thee,
Earth and heaven reflect Thy rays,
Stars and angels sing around Thee,
Center of unbroken praise!
Field and forest, vale and mountain,
Flowering meadow, flashing sea,
Chanting bird and flowing fountain,
Call us to rejoice in Thee.