Hastening the End of Morality at Hastings 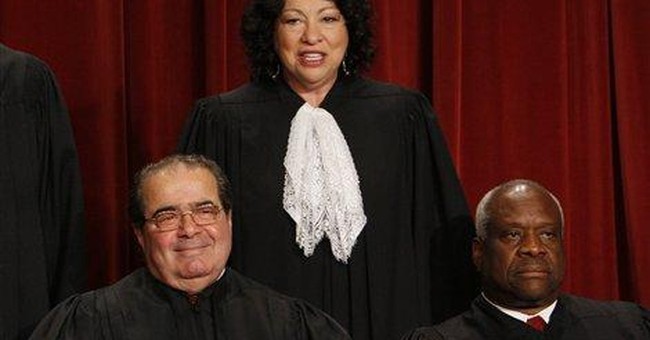 The University of California Hastings College of the Law case, which the U.S. Supreme Court heard on April 19, has its share of absurdity, but what’s missing is outrage.

This one is about the school denying recognition to a Christian Legal Society campus chapter because it will not have atheists or homosexuals as officers. Yes, I know it’s absurd on the face of it. It’s like insisting that People for the Ethical Treatment of Animals be forced to install meat-lovin’ rocker Ted Nugent.

It’s bad enough that a prestigious law school itself committed unconstitutional discrimination against a Christian club.

It’s even more unsettling that some Supreme Court justices can’t fathom the difference between genuine civil rights guaranteed by the Constitution and newly coined identity-based “rights” emanating from the infinitely expandable right to privacy. That’s the one discovered in the birth control cases, perfected in Roe v. Wade, and elevated to cosmic heights in Planned Parenthood vs. Casey, where Justice Kennedy emoted that the meaning of the universe is the search for the meaning of the universe.

Sonia Sotomayor, the newest Associate Justice on the U.S. Supreme Court, showed why 31 Senators voted against her. She opined that a college club that upholds rules about sexual morality and faith is like, racist or sexist, man: “Are you suggesting that if a group wanted to exclude all black people, all women, all other forms of discrimination a group wants to practice, that a school has to accept that group and recognize it, give it funds, and otherwise lend it space?”

Well, there goes the men’s rugby team. And the campus NOW chapter.

Michael McConnell, gamely representing the Christian Legal Society, replied to Justice Sotomayor that a group may discriminate on the basis of beliefs, not status. Backing Sotomayor’s line, Justice John Paul Stevens asked, “What if the belief is that African Americans are inferior?”

McConnell patiently repeated that this was still about beliefs, not status. He got help from Chief Justice John Roberts, who said, “Gender or race is fundamentally different from religious belief. Gender and race is a status. Religious belief has to be based on the fundamental notion that we are not open to everybody. We have beliefs; you have to subscribe to them. And we have always regarded that as a good thing.”

Justice Samuel Alito did his best to explain to his colleagues that banning all distinctions would lead to forcing a Muslim group to admit anti-Muslims. Antonin Scalia made the Democrats-joining-the-Republican Club analogy, and added, “to require this Christian society to allow atheists not just to join, but to conduct Bible classes, right? That’s crazy.”

God bless Justice Scalia. This one seems like a slam dunk, based on the association question alone. But a core issue – the conflation of morality with bigotry – still needs revisiting in the manner that Scalia addressed it in Lawrence v. Texas (2003) ::

“Today’s opinion is the product of a Court, which is the product of a law-profession culture that has largely signed on to the so-called homosexual agenda… It is clear from this that the Court has taken sides in the culture war, departing from its role of assuring, as neutral observer, that the democratic rules of engagement are observed.”

To raise moral concerns is to guarantee public scorn. In the 1960s, Tom Wolfe noted that the Upper East Side (and Hollywood) liberals suppressed any mention of communism’s atrocities by making it a breach of etiquette to be anti-communist. You could be anti-Nazi, but not anti-communist, which is why only a handful of films were made with communists as the villains, unlike the ubiquitous Nazis.

A similar phenomenon has occurred regarding sexual morality. In After the Ball, a 1989 strategy manual written by two Harvard-trained public relations experts, gay activists were urged to enforce “jamming,” that is, to make someone ashamed for even having a particular thought by delivering a swift and severe public penalty for expressing it. They correctly perceived that:

“All normal people feel shame when they perceive that they are not thinking, feeling, or acting like one of the pack.”

The legal establishment “pack” is nearly of one mind when it comes to enforcing the new dictates of “tolerance” that are steadily eroding the constitutional freedoms of religion, speech and association.

For years, social revolutionaries have distorted civil rights laws by hijacking the moral capital of the black civil rights movement and misapplying it to behavior that has a moral component. Feminists have misconstrued abortion restrictions as simply discrimination against women (except for the tiny women being aborted). “Sexual orientation” and “gender identity” have been added to civil rights statutes, unleashing legal attacks on traditional institutions, starting with the Boy Scouts. The point that resistance is futile is driven home a thousand ways by television, movies and even in schools.

The result of the revolutionaries’ blitzkrieg is a cultural elite that is so terrified of being accused of being judgmental that they can no longer have rational discussions about what is normal, natural or healthy.

In the California case, the naked threat to free association will probably carry the day. Religious clubs will be able to breathe a bit easier when the Court rules that chess clubs cannot be forced to have as leaders people who prefer tiddily winks.

But the law school’s action and its advocates’ insistence that sexual morality itself is indistinguishable from bigotry is a problem that runs deeper than bureaucratic ham-handedness.

Until this dangerously absurd premise is delegitimized, we will see many more cases like Hastings, especially if Congress passes the Employment Non-Discrimination Act (ENDA).

The final result of falsely equating morality with bigotry will be the criminalization of Christianity, not to mention Orthodox Judaism. The Boy Scouts and the Hastings Christian club are just the canaries in the coal mine.

Jonathan Turley: Jerry Nadler made a "major blunder" by accusing Senate Republicans of engaging in a cover-up
Hotair
Bernie's Campaign Calls the Police After Reporters Question Them Over a Staffer's Wish to Murder All Rich People (Including Bernie?)
Redstate