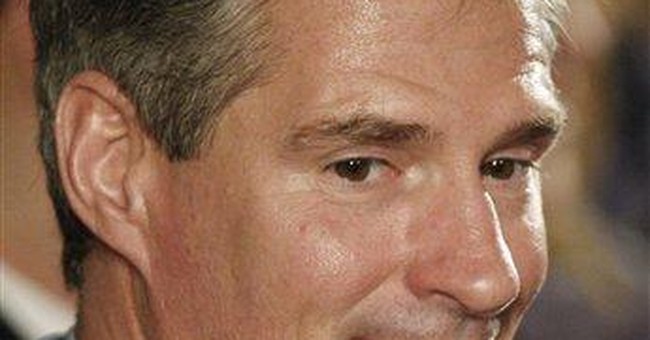 Now that the big drama is over, and Massachusetts Republican Scott Brown has taken what was for four decades Ted Kennedy’s U.S. Senate seat, Americans can sit back and watch more high drama.

As the election results sunk in, there was Democratic strategist Paul Begala on CNN trying to find a silver lining, and eventually pulling out this thread: Obama can look strong in defeat, show that he’s heard the American people, and still ram the health care bill down our throats!

MSNBC’s Rachel Maddow, visibly depressed, entreated liberal leaders to stop whining, get off their duffs and press on, press on.

Tikkun magazine’s hard left rabbi Michael Lerner actually blamed Obama for the debacle, saying he had moved too far to the right. Tikkun’s Website accuses Obama of morphing into an “inside the Beltway pragmatist.” Apparently, Obama should have skipped socialism altogether and raised the red flag with a star on it.

At the Washington Post, whose cultural tastes range from merely trendy to decadently perverse, the Style section devoted a half page review today to “I Am My Own Wife,” a play about an East German cross-dresser.

It’s a nice, if unintentional reminder that liberals are going to have to do a lot of cross-dressing themselves to convince an ornery electorate that they are not, in fact, liberals.

The message Tuesday out of the Bay State was clear: Don’t mess with our health care. Stop spending trillions of dollars. Stop trying to turn the United States into … East Germany.

But brave, liberal pundits are not easily deterred, and offer many reasons for the Massachusetts Meltdown. When they are not beating up Martha Coakley for running a lousy campaign (which she did), they are blaming everything else. The Post’s Steven Pearlstein tut-tutted the idea that Obamacare was the signature issue, and instead offered a potpourri of explanations from the federal deficit (bingo!) to state “big budget shortfalls” to, yes, even the earthquake in Haiti. Pearlstein concluded that “Americans are in a grumpy mood and might want to take it out on the politicians and parties in power.”

Later in the column, he comes right out and says, “the Massachusetts contest was not a referendum on health-care reform, despite the best efforts of the national media and the national parties to make it so.” Huh? Both candidates had emphasized repeatedly that health care was at the core of the race. In his victory speech Tuesday night, Sen.-elect Brown said over and over that he and the American people were fed up with the attempted federal takeover of health care and that he was going to Washington to stop it.

Speaking of Washington, Nancy Pelosi put up a brave, slightly crazed front, saying that she and her colleagues were going to ram through some kind of health care bill regardless. She plans to visit some caves in the South Pacific and get advice from some Japanese soldiers who still have not surrendered. Over in the Senate, Harry Reid said he was “looking forward to working with” Scott Brown. He was also looking forward to his next dentist appointment.

The surest way to ram through Obamacare in its current form would be for the House to take anti-queasiness pills and accept the monstrous Senate version without any changes. This is unlikely for many reasons, chief among them that the Senate bill explicitly uses taxpayer money to fund abortions, and that’s too much for some Blue Dog Democrats who voted for the House version only because of the Stupak Amendment prohibiting federal funds for abortion.

The Senate could also try to vote quickly on the bill before Brown is seated, but Sen. Jim Webb of Virginia has thrown a harpoon into that whale of an idea by saying he could not support any such chicanery and that the Senate should wait until Brown is seated before doing anything. If Harry Reid goes ahead anyway, he risks an open revolt within his own party.

Scott Brown is not an across-the-board conservative. He will be a disappointment on certain issues, particularly on the life issue. He is effectively “pro-choice,” but opposes partial-birth abortion and supports parental consent for minors. And as for homosexual activism, he says he opposes “gay marriage” but also opposes a federal constitutional amendment defining marriage as the union of one man and one woman, saying it should be left to the states. He did say a few years ago that he thought a lesbian couple having a child was “not normal,” or something to that effect, which gave the liberal Massachusetts press conniptions.

If the GOP takes the wrong lesson from this monumental victory and says it is now time to expand the “big tent” and focus strictly on fiscal issues, it will demonstrate that party leaders are clueless about the groundswell of the Tea Party movement. Many Tea Party members understand that if the moral foundations crumble, we cannot endure as a self-governing nation, resisting the siren song of socialism.

For now, we need to thank God, regardless of party politics, that Massachusetts voters stood up and said “No!” to socialized medicine and to the Obama/Reid/Pelosi agenda of Big Government. Lots of prayers were raised across the nation over this special election.

I doubt that now that the Almighty has given America a second chance that He would have us go back to complacency. In fact, we should pray that He gives us an even bigger broom in the coming year.