Some Key Questions for Sonia Sotomayor 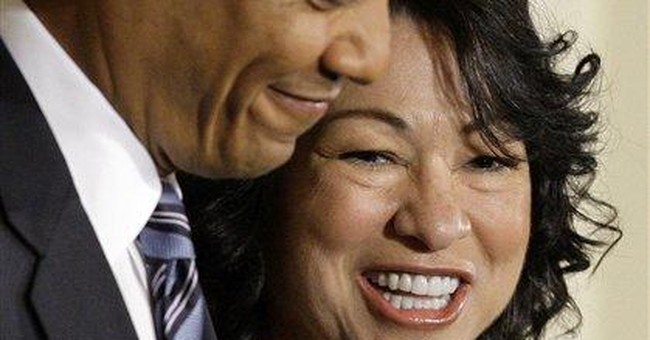 When Senators get a chance to vet Supreme Court nominee Sonia Sotomayor, there are some important questions that they may want to get to the bottom of.

Judicial philosophy - Ms. Sotomayor, in the Berkeley La Raza Law Journal, you were quoted in your speech “A Latina Judge’s Voice” as saying:

“I would hope that a wise Latina woman with the richness of her experiences would more often than not reach a better conclusion than a white male who hasn’t lived that life.”

You also said “our gender and national origins may and will make a difference in our judging.”

Finally, you urged some advocacy groups “to figure out how we go about creating the opportunity for there to be more women and people of color on the bench so we can finally have statistically significant numbers to measure the differences we will and are making.”

Impartial justice is the expected standard in America’s courts.  Judges are to apply the law, not make decisions based on the group identity of the parties involved.  Otherwise, justice would not be blind and the scales could be tipped toward favoritism.

Question:  Will you judge according to the rule of law or according to your “empathy” for particular parties in a case? Do you believe that government and corporate policies should openly discriminate against white males by employing affirmative action?

National sovereignty – In The International Judge, a book for which you wrote a foreword, there is this observation on p. 228:

Several past and current Supreme Court justices (O’Connor, Breyer, Kennedy, Ginsburg) say that U.S. courts should incorporate international opinion and foreign court decisions. In several key cases, such as Lawrence v. Texas (2003) and Roper vs. Simmons (2005), the majority cited international sources as part of their rationale.

Question: Do you believe that duly elected American state legislators are less qualified to make laws for American citizens than are foreign lawmakers and judges?  In cases where U.S. law conflicts with international legal opinions, would you rule against the U.S. law? If not, why not?

Role of the courts –  Article I of the Constitution vests “all legislative powers herein” to Congress. Article II assigns “executive power” to the president. Article III creates “judicial power” that is “vested in one Supreme Court, and in such inferior courts as the Congress may from time to time ordain and establish.” Nowhere in the main text, the Bill of Rights or in any other amendments does the Constitution give courts the power to “make policy,” which is a legislative function.

In a 2005 Duke University Law School forum, you said that “the court of appeals is where policy is made.” You then explained, to your own, and the audience’s laughter while making “air quotes,” that “we don’t make law, I’m not promoting that, I’m not advocating that, you know.”  Yes, we know. Wink-wink.

Question: Many people think that courts at all levels have usurped legislative power by ordering taxation, striking down marriage laws, sodomy laws and criminal laws, confiscating private property and, in short, making public policy. How can we be assured that you won’t do this if you’re confirmed to the Supreme Court?

Self defense – Ms. Sotomayor, you are one of just three appellate judges to rule (in Maloney v. Cuomo, 2009) that the Second Amendment’s right to bear arms does not apply to the states. As American Civil Rights Union Senior Fellow Ken Blackwell observes:

“That means if Chicago, or even the state of Illinois or New York, wants to ban you from owning any guns at all, even in your own house, that’s okay with her. According to Judge Sotomayor, if your state or city bans all guns the way Washington, D.C. did, that’s okay under the Constitution.”

In the Heller case (2008), the Supreme Court struck down D.C.’s draconian ban on handguns, thus acknowledging a right to bear arms. And even liberals like Michael Kinsley have researched the Founders’ intentions and reluctantly concluded that the Second Amendment protects private gun ownership.

Question:  Would you uphold the Constitutional right to self-defense as embodied in the Second Amendment or would you issue an opinion along the lines of Maloney?

Right to life – Ms. Sotomayor, you ruled to uphold the federal “Mexico City Policy” which forbids U.S. tax dollars from going to international organizations that perform or promote abortions. Yet you have been appointed by the most pro-abortion president in history, whose views based on national surveys could be characterized as “extreme.”

Question:  Do you think that Roe v. Wade was a rightly constructed opinion or, in the words of Justice Byron White, “an exercise of raw judicial power?”