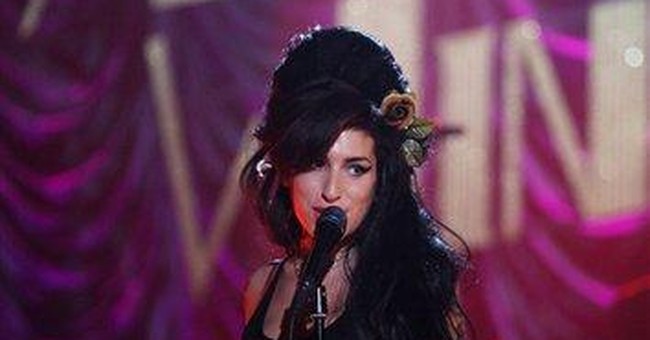 With Valentine’s Day looming, USA Weekend, the colorful Sunday insert that has an estimated 49 million readers in 23 million households, featured actor Matthew McConaughey holding a red rose on the Feb. 8-10 cover with this headline:

Matthew McConaughey reveals his new feelings about “love, fatherhood, marriage” and his MOST AMAZING VALENTINE’S DAY EVER

Well, it turns out that Mr. McConaughey, who stars in this week’s top box office draw, Fool’s Gold, is going to be a dad this summer, courtesy of his girlfriend of two years, Brazilian model Camila Alves, 25. He says that will make this Valentine’s Day very special.

Isn’t that romantic? Well, yes, until you get to this part:

Try to pin him down about where his relationship with his latest love is headed, and he gives esoteric answers about not following a “Westernized” path. “We are not into any Westernized program of how relationships are supposed to go,” McConaughey says. “I am older; I have my own life. I have built things. A woman gets to be 38, and her clock is ticking. For me, the challenge is that as I get older, I get set in my ways.”

The kid’s not set, though. The child is going to be a bastard. Dad says so. He does not want “Westernized” programs like marriage to get in the way of his “own life.”

In more civilized times, society would confer on this man the status of a cad, not a flattering cover piece. Despite his short-term pledge of support, he is telegraphing the message that he might or might not be around for the long haul.

To give due credit, at least he’s not the sort of cad who crows about women’s rights and then offers to drive his “love” to the abortionist.

Camila should not be worried for what lies ahead, we are informed.

“We don’t have any plans to get married,” he says. “But I wouldn’t be with Camila if I didn’t love her and didn’t have great dreams for the future.”

If that does not involve getting new arm candy some day, why doesn’t he do the right thing and marry the girl? He’s already gone part of the distance by setting up house, and saying things like, “you start raising a child right away, right after conception.”

His reluctance to commit, however, might be partly because celebrity culture, and increasingly American culture as a whole, has no such expectation.

USA Weekend’s gossip column, like Parade magazine’s Personality Parade, has been cooing enthusiastically for years over celebrity births out of wedlock, gay “weddings” and serial adulteries. The cumulative effect is to turn marriage into a mere lifestyle option, even for parents, and marital breakup as the expected outcome for most. The steady drumbeat of celebrity non-commitment, like celebrity profanity, has cultural implications.

If it’s good enough for people who can have anything they want, why shouldn’t the average person try to live this way?

Because, as the ad says, life comes at you fast. The potholes along Hollywood’s fast lane are paved over with the lush greenery of bottomless bank accounts, and the wounded stars can retreat to comfy rehab centers.

Multiple Grammy winner Amy Winehouse probably won’t face much of a wait for her next stint at the high-priced center that should name a wing after her. But such treatments, which can range as high as $30,000 a month, pose a challenge for the average Joe. So, too, do non-commitment and serial marriages.

Constant depiction of celebrity mischief as the norm generates copycat behavior. And it’s wrong. But it makes good copy. There are few things more satisfying than to watch other people’s missteps and meltdowns. It’s one of the less admirable aspects of human nature to which we are all vulnerable.

The article says Mr. McConaughey is “a self-described religious person who sang in the choir at his Methodist church and prays often.”

That kind of life runs smack against a celebrity media culture that is replacing timeless verities with faddish conceits, such as the idea that marriage is merely optional for parents.

In the old days, the stars misbehaved, but they had the decency to be hypocrites, at least, and keep more of it to themselves. As Nietzsche said in one of his more lucid moments, “hypocrisy is the tribute that vice pays to virtue.” What we do affects other people, so putting up a good front of public virtue is the next best thing to actually behaving.

It would help everyone if the stars, along with USA Weekend and the rest of the gossip mill, tried harder to rise at least to the level of hypocrisy.

And let’s hope that Mr. McConaughey’s “Most Amazing Valentine’s Day Ever” includes a plan to bestow an engagement ring on Camila, thus moving him from “cad” to “committed dad.”