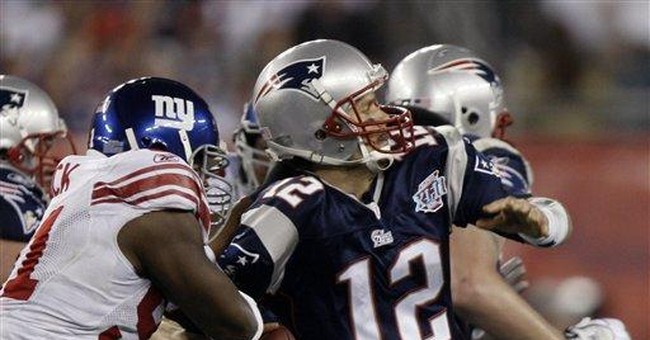 Except for diehard Patriots fans, most folks consider Super Bowl XLII a winner, with a nail-biting finish, record ratings, a fine halftime show with Tom Petty (for all those Boomers) and mostly tasteful, entertaining commercials.

Nobody missed the Cialis or Levitra spots, which, thankfully, were absent.

Here’s a quick review of the ads, starting with the bad.

GoDaddy went with Indy driver Danica Patrick, who tried to coax voyeurs to the company site. Once there, the suckers were treated to a lame joke about a tree-chewing animal. Let’s hope that for Patrick’s sake, and the fans in the trackside seats, that she can drive better this year than how she navigates her career.

The Secret babe was followed jarringly by a pitch for AMP energy drink with a hefty guy who hooks cables to his bare chest so that he can jumpstart a vehicle. The group I was with let out a collective “Eeeuuuwww!”

The group emitted another “Yechhhh!” when a woman’s heart literally leaped out of her chest in the CareerBuilder ad and started down the hallway while viewers were told that if they were unhappy at work, they should instead “follow their heart.” It might have worked if the woman had not been shown with a gaping hole in her body. There’s something to be said for using merely metaphorical imagery. At least the team that created this disgusting ad knows where to conduct their own job search.

A few ads got mixed reviews. These would include Fed-Ex’s giant pigeons terrorizing a city, Audi’s Godfather spoof, and Bridgestone Tires’ driver braking for screaming animals and (barely) a screaming Richard Simmons.

E*Trade had a talking baby with a man’s voice. You either loved him or hated him. The clown bending balloons behind the baby was creepy. Even the baby said so.

As usual, Budweiser scored with numerous funny ads, mostly for Bud Light, with guys doing slapstick or finding ways to smuggle bottles into girlie events like a wine and cheese party. The big winner for Anheuser-Busch, and the most popular ad in a USA Today poll, however, was the Clydesdale who is rejected for the Budweiser beer wagon team. A compassionate but tough Dalmatian trains the horse for the big time, all to the theme from Rocky. When the tryouts come next year …. Sorry. Got choked up there for a minute. Almost makes you want to go out and buy a Dalmatian.

• The European-art-film Doritos ad in which a man places a mousetrap in front of a mouse hole and waits patiently in a chair while an opera singer emotes. As the man stuffs Doritos in his mouth, another man in a bad mouse suit smashes through the wall, takes the man down and punches his lights out. Why is this funny? I don’t know, but it is. A friend of mine, however, found it “disturbing.”

• A plain girl with a uni-brow and gaudy makeup walks along, snagging every man in sight. We’re mystified until we see her dabbing her neck with Planters cashews. So that’s why these guys went nuts!

• The Underdog balloon at the Macy’s Thanksgiving Day parade does battle with Baby Stewie for a Coke bottle balloon. The two characters bump and carom off buildings and the bottle finally slips up and away to the unexpected winner – Charlie Brown!

• Justin Timberlake gets beat up all over town by inanimate objects and is finally decked with perfect comic timing in a well-paced Pepsi ad.

• Some famous people nod off until they get a swig of Diet Pepsi Max. Then, Busta Rhymes, LL Cool J, Missy Elliott and Joe Buck do their jaw-jutting mojo.

• Sobe Lifewater powers a bunch of dancing lizards, along with Naomi Campbell, in a parody of Michael Jackson’s Thriller. Too many lizards for my taste, but some folks liked it.

During the pre-game show, the NFL aired a stunning reading of the entire Declaration of Independence, featuring past and present football stars and coaches, including Peyton Manning, Tony Dungy, Don Shula and LaDainian Tomlinson.

Posed in front of skyscrapers, on balconies and in Tomlinson’s case, on the deck of a Navy ship in San Diego Harbor, the men reminded Americans and people around the world as to how and why America was born, and the Creator from Whom our rights originate.

Perhaps the most moving segments were those featuring Marie Tillman, widow of NFL star Pat Tillman, who was killed in Afghanistan.

The Declaration video should be shown in every school in America. NFL executives might want to view it again, too, before launching their annual crackdown on churches for holding Super Bowl parties with big screen TVs.

On a more positive spiritual note, Giants receiver Plaxico Burress, who scored the game-winning touchdown, told millions of people that he asked God to get his injury-wracked body through the game. He said that if He would do so, Burress would “give God all the glory.”