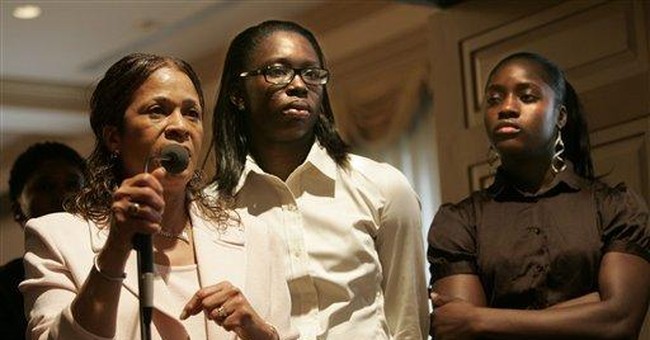 It pays to be on the media’s approved victims list.

After Don Imus made his “ho” comment about the Rutgers women’s basketball team on April 4, the media went into a feeding frenzy. In the first week after the story broke, the three major networks aired a total of 19 segments. On cable, CNN had 60, with Fox News at 21 and MSNBC at 13.

But after the Sept. 7 Navy-Rutgers football game, at which Rutgers fans crudely and obscenely abused the visiting Midshipmen players, fans and families, the media were nearly silent.

Star-Ledger columnist Mark DiLonno, a Rutgers grad and Navy veteran, broke the story on September 11 in a first-rate smackdown. He reminded the spoiled, face-painted kids in the stands that young men and women their age were risking their lives in the Navy and other services to defend their freedom. He also wondered why colleges were increasingly allowing such incivility to visiting teams.

As DiLonno reports it, here’s how some fans reacted when Navy kick returner Reggie Campbell got up limping after being tackled:

“Reggie Campbell is a senior. After graduation in June he has a five-year commitment to the American military, which, like it or not, is at war….

“Navy was booed and peppered with ‘You suck!’ chants when they stepped on the field for both halves. Toward the end of the second half, Rutgers students in the new bleacher section began to serenade the adjacent section of Navy fans and uniformed Midshipmen.

On Tuesday, Rutgers President Richard McCormick apologized to Naval Academy officials in a letter in which he said, “No student-athlete should ever be subject to profane language directed at them from the crowd, and certainly not the young men of the Naval Academy who have made a commitment to serve our nation in a time of war.”

So how have the media responded? On Sept. 12, the Washington Post, UPI and AP ran less than 300 words each on the Rutgers officials’ apology. The New York Times, meanwhile, with Rutgers in its backyard, referred to the incident in the sixth paragraph of a Sept. 14 column by Harvey Araton about the overall Rutgers football program. The networks have ignored the incident completely.

In contrast, the media were all over the Imus incident from the beginning. When Imus apologized, they smelled blood in the water, and paid even more attention to the story.

Surely the outrageous behavior by the Rutgers fans should have elicited a national reaction and comparison to the Imus sacking, but the media’s collective yawn told the public: No big deal.

It might still be a smart PR move for the widely-publicized Rutgers women’s basketball team, which netted tremendous sympathy over Imus, to issue a press release lamenting the behavior of their school’s football fans. It could run along the lines of, “We know how it feels to be abused. …”

If nothing else, they might wind up on Oprah again.