Weird Men from Mars and Chevy 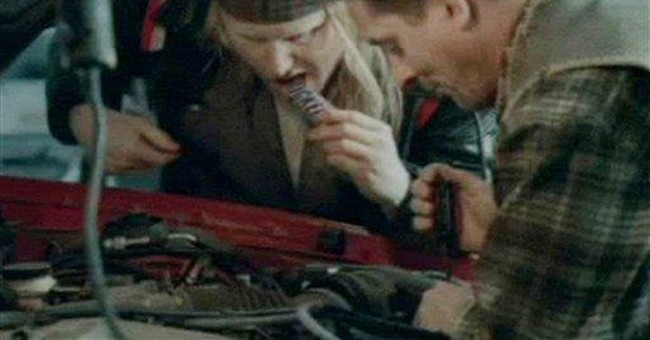 The guy with the cheesy grin who crashes his car while gazing at the girl with the Doritos bag during the first quarter of the Super Bowl is a crowd pleaser. It’s fun, sweet and romantic. It ranked high on many lists of the best Super Bowl commercials.

The other Doritos ad, featuring a supermarket checkout girl getting “hot” while ringing up a guy’s different-flavor Doritos bags, is funny until it goes over the top. The clerk yells “Giddyup” and then arises, disheveled and asking for a “cleanup.” Ick.

The two spots starkly illustrate our cultural divide. The first is a tribute to romantic love and is done in good taste. Some former Liberty University students made it for $12.79 (the cost of four bags of Doritos). The second is about sex, and, like much of our pop culture, doesn’t know where to draw the line.

Another tasteless ad was for Mars, Inc., and it probably cost a lot more than $12.79. Made by TBWA/Chiat, the spot shows two mechanics locking lips after devouring a Snickers bar from either end. Then they pull off huge patches of chest hair in a bid to restore male honor. It was a horrible rip-off of a funny scene from the film Planes, Trains & Automobiles, in which Steve Martin wakes in an inadvertent embrace with John Candy and they leap up, horrified, and begin strutting about, talking Bears football.

What possessed Mars to do it? Do they really think people will hunger for a Snickers bar after watching two men gobble their way to a kiss? Did they agree to the ad after viewing sales figures reaped at candy counters during showings of Brokeback Mountain? Candy lovers who especially favor Three Musketeers bars are praying that Mars won’t target their treat next year during Super Bowl XLII.

The Snickers ad caused “anxiety.” They left it at that. But here’s how Dr. Snyderman described reactions to the romantic Doritos ad:

“The brain really lit up. The test subjects loved it and the parts that lit up were empathy, identification, yearning, wanting to get at that product.”

Other clear winners this year were Budweiser’s many funny spots, including the lovable white dog who gets sprayed with dirt, is mistaken for a Dalmatian and gets to ride atop the Budweiser wagon with a beauty queen. Another was Coke’s video game hero, walking about a city doing good deeds. And the top spot on one website, Spotbowl.com, was the Blockbuster ad in which a rabbit and guinea pig try to use a struggling real mouse like a computer mouse to access videos.

Another popular ad was for Emerald Nuts, which proclaimed that “at 3 p.m., when your blood sugar is low, Robert Goulet comes in and messes with your stuff.” The spot shows nice guy singer/actor Goulet creeping about offices, creating havoc. After the hapless victim eats some Emerald nuts and perks up, however, we see Goulet lurking off on the ceiling like Spiderman. Oddly, the UCLA team found the ad’s effect on subjects’ brains was “really quite flat. Not much lit up.”

It would be interesting to know what kind of reaction the scientists got to the Chevy ad for their HHR car, entitled “Men Can’t Keep Their Hands Off It.” The spot was suggested by a University of Wisconsin coed, but then produced by some high-priced pros. According to Bob Garfield of Advertising Age, the ad features “a horde of guys throwing off their shirts and getting erotic on a passing HHR ….it’s a better ad for sticking with grown up ad agencies than it is for Chevrolet.” The spot even shows a police officer nearly naked, riding a horse amidst the writhing male mob.

The Super Bowl is watched by more than 90 million Americans, but it also has an estimated worldwide audience of one billion.

For the past year, Chevrolet has run a stunning “This Is My Country” series featuring the music of John Cougar Mellencamp and showing snapshots of American history, with an emphasis on patriotism, personal responsibility, can-do spirit and brotherhood. It’s enough to make even a Ford fanatic wander into a Chevy dealership.

I don’t think we need UCLA brain scientists to figure out which ads the Muslim Jihadists in Iran, Afghanistan and Iraq will be using in their recruitment videos.