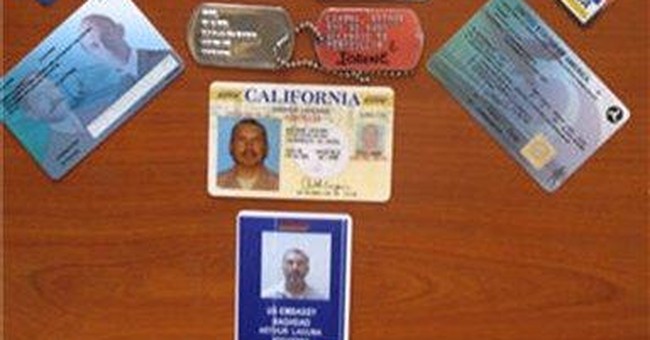 All eyes will be on New Hampshire Wednesday morning for the first true primary in the 2008 elections. But even as hardy New Englanders trudge to the polls, something at least as consequential will happening in Washington, D.C., where the U.S. Supreme Court will hear arguments in a major case on election law.

In Crawford v. Marion County Election Board and Indiana Democratic Party v. Rokita, the court will tackle the issue of vote fraud. The arguments will revive the debate over voter disenfranchisement that raged after the contested presidential election of 2000.

This time the controversy surrounds Indiana’s requirement that voters show photo identification when they cast their ballot. At a time when Americans are asked to show photo ID for routine things such as buying alcohol or getting on an airplane, it hardly seems unreasonable to do the same before voting. There’s also overwhelming public support for voter ID requirements; Rasmussen puts the number at 77 percent approval nationally.

In Indiana, however, a coalition of left-leaning groups -- led by the state Democratic Party and ACLU -- has brought suit against the state, claiming that requiring photo ID at polling places disenfranchises low-income citizens, minorities and seniors -- constituencies considered key to Democratic electoral success..

Claims of disenfranchisement have been rebutted in numerous studies of voter ID requirements. The most recent, a statistical analysis completed by The Heritage Foundation in September, flatly concluded that voter ID laws don’t depress voter turnout.

“Voter identification laws largely do not have the claimed negative impact on voter turnout based on state-to-state comparisons,” David B. Muhlhausen and Keri Weber Sikich wrote in the Heritage study. “In general, respondents in photo identification and non-photo identification states are just as likely to report voting compared to respondents from states that only required voters to state their name.”

The argument taking place on Wednesday will have a dramatic impact on voter ID requirements throughout the country. The court must determine whether the Help America Vote Act (HAVA) of 2002, passed in the wake of Bush v. Gore, allowed states to adopt more stringent requirements (as in the case of Indiana) or created a “ceiling” limiting their ability to implement anti-fraud provisions.

Leading Republicans and Democrats have already weighed in. About 35 congressional Republicans filed a friend-of-the-court brief stating that when they helped enact HAVA, they fully intended to give states the leeway to set their own rules. Indiana took advantage in 2005 and approved the photo ID requirement.

At the time of passage, HAVA was hailed as groundbreaking because it represented congressional acknowledgement that vote fraud was a problem in America. The law primarily addressed voter registration issues, leaving it up to the states to set their own rules for administering elections. Specifically, it required states to keep a voter-registration database, mandated that anyone who registers to vote provide a driver’s license or Social Security number, and stipulated that anyone registering by mail must provide a photo ID.

By instituting these requirements, Sen. Kit Bond (R-Mo.) said states would have a new way to crack down on registration fraud.

“Barnabas Miller of California, Parker Carroll of North Carolina, Packie Lamont of Washington, D.C., Cocoa Fernandez of Florida, Holly Briscoe of Maryland, Maria Princess Salas of Texas and Ritzy Mekler of Missouri. They are a new breed of American voter. Barnabas and Cocoa are poodles. Parker is a Labrador. Maria Princess is a Chihuahua, Holly is a Jack Russell Terrier, and Ritzy is a Springer-Spaniel,” Bond said at the time. “Now, I like dogs ... but I don’t think we should allow them to vote.”

Vote fraud encompasses more than just pets, however. The deceased are notorious for emerging from their graves to cast ballots. The problem becomes even more potent when illegal immigrants are thrown into the mix.

Conservatives have rushed to defend Indiana, fearing a loss at the Supreme Court would erode requirements in the 24 states that have laws stricter than what Congress authorized in 2002. Victories in the Indiana case at the district and circuit courts bode well for their cause, and now they’re even using one of the left’s favorite figures to bolster their argument. When former President Jimmy Carter co-chaired the Commission on Federal Election Reform, he acknowledged the benefits of a photo ID. “Voters in nearly 100 democracies use a photo identification card without fear of infringement on their rights,” the report stated.

If the United States is to set an example for the rest of the world, we must maintain the integrity of our electoral process. This case should be a slam dunk for the Supreme Court.