How to Save Taxpayers $31 Billion 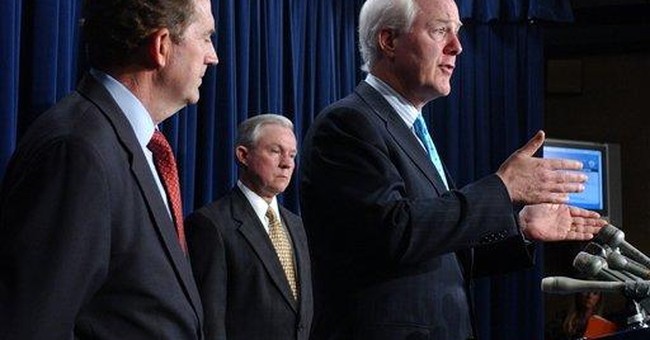 Sen. Jim DeMint is as frustrated as anyone on Capitol Hill about Congress’s failure to wrap up work on the federal budget. With 11 of the 12 appropriations bills unfinished and U.S. troops in need of funding, DeMint sees the next couple weeks as a make-or-break period for lawmakers intent on steering Congress back toward fiscal restraint.

The South Carolina Republican has a simple plan to save taxpayers $31 billion. He wants Congress to pass a continuing resolution, rather than adopt a massive omnibus spending bill.

DeMint’s idea goes back to the end-game strategy that Republicans successfully employed last year after their disastrous showing in the November elections. Rather than try to push appropriations bills through a Congress filled with newly energized (and antagonistic) liberals, the GOP leadership opted simply to reauthorize funding at fiscal 2006 levels. The move not only skirted rancorous proceedings, but it also held spending in check and dramatically cut pork-barrel projects.

Following that same strategy this year would save taxpayers $31 billion, according to DeMint’s calculations, which take into account new spending proposed by Democrats and thousands of earmarks. DeMint pegs the Democrats’ total spending proposal at $954 billion. A continuing resolution, however, would top out at $923 billion. Here’s how DeMint described it during a meeting at the Heritage Foundation last week:

“Last year we were able to stop the omnibus and get a continuing resolution, which meant the government is operating on Republican priorities. We didn’t change social policies; we didn’t fund new Democrat programs last year. And if we had another continuing resolution this year, we would, in effect, go into our second year of not shifting a lot of this funding toward Democrat priorities.”

There’s only one problem. Senate Republicans might stand in his way. Minority Leader Mitch McConnell, a veteran appropriator, told National Journal’s CongressDaily last week, “Given the lack of time available, the best way to deal with the troop funding issue would be in the context of some kind of settlement on an overall omnibus appropriation bill.”

That’s what worries DeMint. He fears that his Republican colleagues, after fighting for fiscal responsibility throughout much of 2007, might be tempted to take the Democrats’ bait and vote for the massive omnibus and troop funding bill as the year draws to a close.

“When you see any of us [Republicans] talking about merging troop funding with an omnibus, you know we’re losing,” DeMint said. “And you know that [Democrats are] going to use that human shield -- those troops -- as hostage to get through something that should not pass this Congress.”

DeMint’s idea should appeal to conservatives for several reasons. First of all, it locks in spending at levels lower than any of the proposed 2008 appropriations proposals. Secondly, it short-circuits efforts to create expensive new programs. And finally, it would constrain earmarks, which are always plentiful in “must-pass” legislation such as an omnibus spending bill.

On his Senate blog, DeMint makes the case that now is not the time for earmark foes to retreat. Last year’s continuing resolution help pare the number of earmarks from 9,963 in fiscal 2006 to 2,658. Congress is already on pace to rack up 12,000 earmarks in fiscal 2008 -- even though members from both parties promised to trim last year’s number in half. A massive omnibus, DeMint warns, would threaten the all-time record for earmarks of 13,997 in 2005.

“This proves what we knew all along: politicians in Washington aren’t serious about reforming the earmarking process,” DeMint said. “It’s the same old favor factory -- still open for business -- just under different management.”

Republicans have witnessed firsthand the corrupting influence of earmarks and voters’ anger over fiscal restraint. It cost them Congress in 2006. The question before the GOP today is whether Republicans will fire up the favor factory once again or fight for the weary American taxpayers who are fed with wastrel pork-barreling from Washington.