A New Way to Legislate 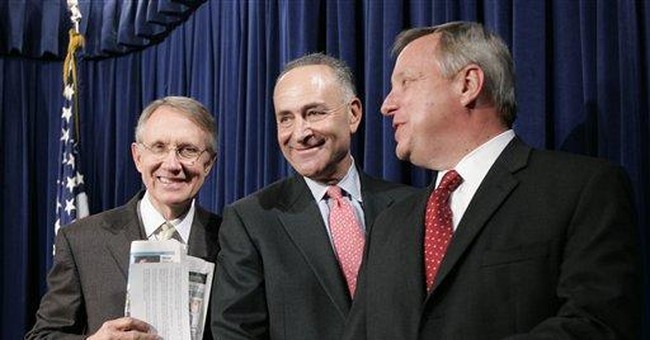 Technology is changing politics. But can politics change technology?

Sen. Dick Durbin spent the past two weeks trying to do just that. The Illinois Democrat embarked on a new experiment in legislating when he turned to the blogosphere in an effort to develop a national broadband strategy to bring high-speed Internet access to more Americans.

With three principles serving as a starting point -- broadband must be universal and affordable, innovation must remain a priority, and broadband must allow more voices to be heard -- Durbin kicked off this first-of-its-kind experiment in legislating. No other lawmaker at the federal level has ever tried anything similar or as ambitious.

Matt Stoller, a liberal blogger with a passion for telecom policy, put the idea into motion. Stoller’s new blog, Open Left, hosted the four-day discussion with Durbin, his staff and several telecom experts. The experiment would come to be known as Legislation 2.0 because it aimed to reinvent the way business is typically done in Washington.

Stoller’s goal and Durbin’s hope was to put everyone on a level playing field -- the exact opposite of the way the legislative process in Congress usually works. The booming lobbying business in Washington, D.C., benefits the big boys and too often leaves average Joes and Janes without much of a voice, particularly on complex issues such as telecom policy.

But Durbin’s new way of legislating attempts to change that. No longer would high-paid Washington lobbyists have the upper hand. "Legislating is often known as a sausage factory, or a contest of interests done in private,” Stoller wrote on July 22. “And in fact, I think a lot of the negative impressions of our lawmaking bodies come from the secrecy of the process.”

There would be nothing secret about Durbin’s legislation. After soliciting public comments about a national broadband strategy, his policy team will now translate those suggestions into legislative language and then request comments prior to the introduction of a bill. Everything is supposed to be done in the open and on the Internet. Lobbyists were welcome to join the conversation, but they had no more influence than you or me.

“I think this is a unique experiment in transparent government and an opportunity to demonstrate the democratic power of the Internet,” Durbin wrote on Open Left. “If we’re successful, it could become a model for the way legislation on health care, foreign policy, and education is drafted in the future.”

There was just one thing missing. While Durbin was talking to mostly liberals on a liberal blog, he was missing out on wide variety of opinions shared by many other Americans. It’s not that the Open Left discussion wasn’t open -- anyone could participate -- but conservatives weren’t going to trek over to a liberal blog to engage in the conversation. Without a more comprehensive outreach strategy, especially in hyperpartisan Washington, Durbin’s bill would go nowhere fast.

But would Durbin consider talking to conservatives? Would conservatives want to talk to him? If he did engage with them directly, would they behave? The answer to all these questions was yes.

Durbin took his conversation about broadband policy to conservative blog RedState last Tuesday in an effort to broaden the discussion. It worked. Conservatives who previously expressed little love for the Senate’s No. 2 Democrat turned out in droves to offer their input. More than 340 comments were generated about broadband policy and the importance of the free market. But most importantly, many new ideas and suggestions were made that might not have been considered.

“I know there were cynics who were suspicious of what Durbin was doing on RedState, but the issues of competition, regulation and role of the private sector were well made and well received,” Durbin’s communications director, Joe Shoemaker, told me. “I think the proof will be in the final product, but this was a great start.”

Broadband policy isn’t a Democrat vs. Republican issue. President Bush in 2004 called for universal and affordable access to high-speed broadband by 2007 -- a goal that’s far from being met. When Bush laid out his plan, many conservatives welcomed his goal as a way to spur innovation, new jobs and economic competitiveness.

Even though liberals and conservatives might disagree about the debate over high-speed Internet access, there’s one thing they both have in common: a desire to take part in the discussion. Durbin picked the right issue to show this experiment in legislating can be a success.

As the rest of the process plays out in Durbin’s experiment, other lawmakers should considering adopting this approach. An open and transparent government benefits all Americans. Dick Durbin deserves credit for showing us the way.