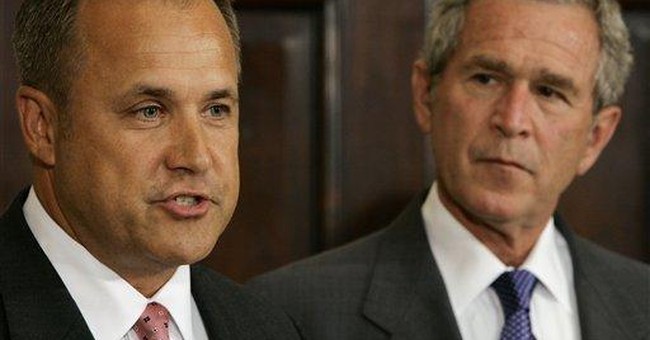 President Bush made no friends in liberal quarters when he told Congress to hold the line on spending or confront his veto pen. Now, with the top slot in Bush’s budget office newly vacant, congressional big spenders are threatening payback.

The man caught in the crosshairs is former Rep. Jim Nussle, who chaired the House Budget Committee from 2001 until leaving Congress last year. Nussle was Bush’s pick last month to replace Rob Portman as director of the Office of Management and Budget. Portman leaves next month to return to his home in Ohio.

What should be an uncontroversial Senate confirmation has turned into a battle between Democratic leaders and the White House over federal spending. The Democrats’ strategy is two-fold: They’re 1) painting Nussle as confrontational and uncooperative and 2) demanding that Bush relent on his veto threat if he wants Nussle confirmed. So far the White House has shown no sign of caving in to the demands.

Senate Budget Chairman Kent Conrad (D-N.D.) fired the first shots at Nussle, criticizing the pick immediately after Bush announced the nomination on June 19. Following a meeting with Nussle one week later, Conrad issued a statement citing “very real concerns about his nomination.” The normally low-key Conrad claimed that Nussle had a “reputation for confrontation” and questioned whether he would be committed to “bipartisan cooperation.”

Democratic leaders in the House apparently got the same talking points. Majority Leader Steny Hoyer (D-Md.) had this to say about Nussle’s tenure in Congress: “He was known much more for confrontation and pressing for a Republican fiscal agenda, which I was not in favor of.” Speaker Nancy Pelosi (D-Calif.) and Democrat Caucus Chairman Rahm Emanuel (D-Ill.) share those views.

Fortunately, not all Democrats are following their leaders’ marching orders. Liberal Sen. Tom Harkin (D-Iowa) threw a curveball at his leadership when he said he’d support Nussle’s confirmation, asserting that the nominee “knows this budget stuff very well.” Further complicating the Democrats’ messaging is the man who worked alongside Nussle on the Budget Committee. Rep. John Spratt (D-S.C.), the committee’s current chairman, has a wholly different view than that of Conrad and Hoyer.

Spratt has volunteered to testify on Nussle’s behalf and spoke favorably about their years of service together during a portrait dedication for Nussle held on Capitol Hill last month.

“Our professional relationship became one of comity and cooperation. And that may strike you as two strange adjectives to choose, but don’t discount their value in this institution,” Spratt remarked. “Jim saw that the amendments on our side, the Democratic side, were allowed fair consideration. Not passage, mind you, but at least the chance to be argued.”

In addition to giving Democrats a voice during the appropriations process, Nussle also has a track record of working with members across the aisle. He teamed with former Rep. and current Sen. Ben Cardin (D-Md.) in the late 1990s to pass the Comprehensive Budget Process Reform Act, legislation that redefined the federal budget process.

The problem for Nussle is that he also oversaw the Budget Committee during the first six years of Bush’s presidency, supporting the pro-growth, free-market principles that liberals ridicule at every opportunity. Despite those good policies, the early Bush years were a time when the Republican-led Congress pigged out on earmarks and abandoned its commitment to fiscal discipline. Although he preached fiscal conservatism, Nussle is now being blamed for the GOP’s spending excesses.

Democratic leaders see Nussle’s confirmation as a way to extract concessions from Bush, who promised to veto appropriations bills that exceed his spending requests. Because the Democratic spending proposals come in at $945 billion, about $81 billion or 9% more than last year, there should be plenty of opportunities to use the veto pen.

Bush has the upper hand if it comes to a budget showdown; he already won the funding dispute over the Iraq War. Conrad and his ilk would like to avoid more showdowns like that. And so they are trying to seize the Nussle nomination as a chance to get Bush to swear off the veto option before their bills reach his desk. Here’s hoping the big spenders’ pre-emptive strike fails.