Bush’s Blunder: How Not to Fire Up the Base 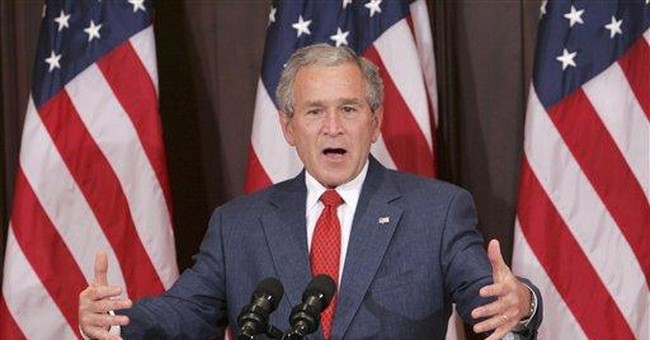 To take the temperature of the conservative movement, just tune into talk radio.

For the past two weeks, talkers’ phone lines have been jammed with angry calls from frustrated listeners. They’re hot as blazes about the immigration bill, and their anger has emboldened grassroots conservatives to criticize President Bush like never before.

“There’s no other topic that I talk about that has the passion of this,” says Washington, D.C., talk-show host Chris Core. “Not the war in Iraq, not abortion, not gun control. Nothing.”

Core isn’t alone. From nationally syndicated hosts to local commentators, the issue of immigration has divided traditional allies and caused what could be an irreparable rift between Bush and conservatives. In my nearly six years living in Washington, all under the reign of Bush, I can’t recall a time when conservatives and the White House have clashed so virulently.

Don’t get me wrong, things were bad during the battles over No Child Left Behind, the Medicare prescription drug bill and the failed Supreme Court nomination of Harriet Miers. But the debate over immigration has the likes of Sen. Ted Kennedy (D-Mass.) and the National Council of La Raza agreeing more often with the Bush administration than conservatives. That spells trouble.

Bush’s decision last week to insult critics of the immigration bill didn’t help. His assertion that they “don’t want to do what’s right for America” caused such a backlash that opponents are now even more determined to stop the legislation. One leading critic told me privately, “His remarks were offensive to many grassroots citizens and activists. How elitist! Outrage is growing because of remarks like these -- just tune in any talk radio program or read any newspaper.”

With nearly ever major conservative columnist opposed to the bill and talk-show hosts railing about it each and every day, it’s not surprising that so many conservatives have fallen in line. But then again, Bush handed them a divisive issue to rally around. Unfortunately for him, it could be his ultimate undoing.

Take, for instance, a Rasmussen poll that showed just 16% of Americans think the bill will reduce illegal immigration. Four in 10 Americans believe it will actually increase illegal immigration. No wonder Bush’s approval rating is going from bad to worse. Since the immigration debate began dominating the news, disapproval of the president’s performance has jumped to the 60% level.

You can’t reach such stratospheric unpopularity simply by ticking off liberals and moderates. Those pathetic ratings mean that the president has succeeded in alienating conservatives like me, one-time supporters who have now lost faith in this administration’s commitment to upholding conservative principles.

The White House knows it’s losing its conservative base over this issue, and is desperately trying to stop the bleeding. In its latest attempt at damage control, the administration dispatched Homeland Security Secretary Michael Chertoff and Press Secretary Tony Snow to high-profile conservative meetings. But instead of easing tensions, their appearances only fueled the opposition.

“As time passes, conservatives become more informed about the bill and more comfortable disagreeing with the president and the establishment GOP -- just like the Harriet Miers situation,” said Jessica Echard, executive director of the Eagle Forum. Her group has mounted vociferous opposition to the bill.

With conservatives keeping the White House on the defensive, the greatest fear is that Senate Majority Leader Harry Reid (D-Nev.) will team with Minority Leader Mitch McConnell (R-Ky.) to ram the bill through so quickly that there won’t be any time to debate amendments or offer alternative proposals.

Popular conservative radio host Hugh Hewitt, who aligned himself with the White House in the Miers fiasco, told me he doesn’t think the bill can pass in its current form, especially if its supporters are unwilling to make sacrifices.

“Some are angry, others are just not persuaded,” Hewitt said of the bill’s critics. “I am in the latter camp. I oppose the bill because it does not secure the whole fence first, because it does not distinguish between Spanish-speaking economic immigrants who pose very little in the way of a national security threat from illegal immigrants from countries with well-established jihadist networks among whose numbers could be sleepers, and because there is no chance that the current staffing of the federal government is remotely capable of handling millions of background and security checks.”

Hewitt may be correct in thinking the bill can’t pass without significant amendment. But the handful of senators who negotiated this deal behind closed doors insist that it can’t survive if it is significantly amended. One of the authors, Sen. Jon Kyl (R-Ariz.), voiced skepticism about the viability of an altered bill after the Senate passed an amendment that limited the number of guest workers.

As the White House carefully plots its course over the next few days, so too will conservative critics. For radio-show host Core, it comes down to two key points. “If there are two things that conservatives stand for, it’s the rule of law and that the government belongs to the people. ... I feel betrayed. I think most people who supported President Bush feel betrayed.”