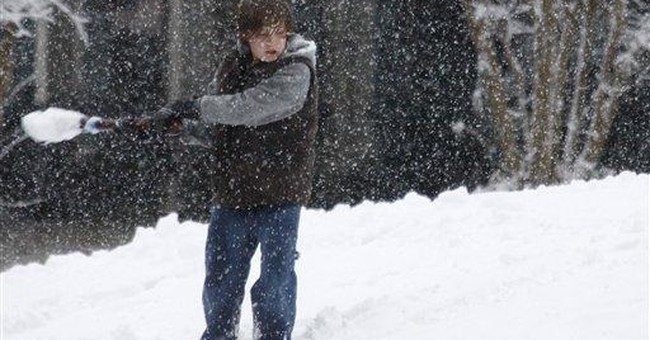 A winter storm provides plenty of time for thinking. Thinking about moving to Florida, for example, or why the county can’t seem to get my street plowed, even several days after the snow stops. But also about the genuine willingness of Americans to help each other.

In the midst of the storm, our neighborhood lost power. There was a real question when it might return.

Luckily, we have a fireplace, and a neighbor recently took down a massive tree. “Take all the wood you need,” he offered. “But it’s fresh wood, so it might be difficult to get the fire started.” So he handed over dry kindling and handfuls of chopped wood from his dwindling log pile, without even pausing to think that he might need that wood if the storm kept power out for days. A few hours later power was restored, and several neighborhood families gathered for an impromptu potluck dinner. Nobody could get to the store. Yet it didn’t matter, because everybody chipped in and we had all we needed. This sort of thing -- people helping each other and finding ways to get by -- is what America is all about. “The storm inspired an outpouring of ‘snow-munity,’” wrote Ruth Marcus in The Washington Post. “Big snows always bring this out.” That’s true. But they only “bring it out” because it’s always there, ready and waiting for needs to arise.

Still, some folks look across our nation and see people fighting for survival in a Dickensian wasteland. Witness the series of TV ads being run by Joseph Kennedy’s “Citizen Energy.”

They feature elderly people abused by large, impersonal forces. In one ad, cancer “costs” a man his job, then the Wall Street crash “costs them their life savings.” Still, they “struggle on, just to get by. To keep food on the table and to heat their home,” Kennedy intones.

Luckily he -- Joe Kennedy personally -- is on hand to help when nobody else will. He drives a heating oil truck and personally delivers black gold (courtesy of the people of Venezuela and Citgo, their national oil company) to help this family.

It’s difficult to use facts to argue against anecdotes. Maybe this family really has no neighbors willing to help out. No church to pitch in. No relatives able to look in or help pay the bills. If so, that’s an individual tragedy. But it’s not reflective of today’s America.

Not long ago, to be old in this country usually meant to be poor. To cite my own anecdote, when my great-grandfather died, my great-grandmother moved in with my grandparents, and she lived with them for decades. There was simply no place else for her to go, and no way for a widow in her 50s to support herself. Today, however, a massive portion of our federal budget is spent on helping older Americans.

As columnist Robert Samuelson wrote recently in The Washington Post, some $20 trillion -- almost half of what the Obama administration predicts the federal government will spend in the next 10 years -- is slated to fund Social Security, Medicare and Medicaid, programs that either exclusively or overwhelmingly benefit the elderly. “The budget is mainly a vehicle for transferring income to retirees from workers, who pay most taxes,” Samuelson notes.

Finally, though, there are signs that Americans are pushing back against the liberal idea that we’re all helpless drones and need the federal government to take care of us. And the Kennedy clan is feeling the sting of the backlash. First, voters in liberal Massachusetts elected Scott Brown to fill the seat vacated when Sen. Ted Kennedy died. Brown specifically vowed to vote against Kennedy’s signature program, universal health insurance.

Next his son, Rep. Patrick Kennedy of Rhode Island, decided he would retire when his term ends. “Is it an unwelcome environment, not just for Kennedys, but for liberal Democrats right now?” anchor Ali Velshi asked a guest on CNN after Patrick’s announcement. The answer, apparently, is yes.

“From the countless lives he lifted, to the American promise he helped shape, my father taught me that politics at its very core was about serving others,” Patrick Kennedy announced in his going-away message. Many voters would respond that we’d like the government to stop “serving” us and let us take care of ourselves.

The snow stopped, and will eventually melt away. So too will the over-reaching welfare state. Unless we reform the big entitlement programs, they’ll keep growing until, in 30 years or so, there won’t be any federal money available to spend on anything else (defense, unemployment benefits, etc.). Politicians will never allow that to happen, nor should they.