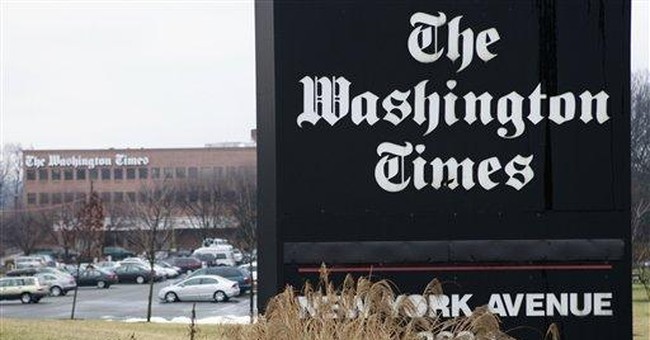 Change has already arrived in 2010. Hope is right behind it.

Let’s begin with the beleaguered newspaper industry, where survival may depend on going “back to the future.” Basically, publishers are hoping they can succeed with a business model that’s already failed broadcasters. They’ll give their product away and hope to make money on the ads.

Here’s how it works: The Washington Times started 2010 by slimming down. “The newsroom will be smaller and we will focus on our strengths, which are national security, national politics, geo-strategic areas and cultural coverage, in addition to the opinion pages and investigation,” Times Publisher/President Jonathan Slevin told Editor & Publisher magazine last month. Ironically, E & P itself went out of business a week later.

The Times will also be given away to key policymakers. In fact, more than half of its circulation will be free. It joins the D.C. Examiner and Express (published by The Washington Post) as free daily newspapers in the nation’s capital.

Recall that this is the model television stations used for decades. Viewers had to pay the upfront cost of a set, but then the programming was free for the taking. Put up a set of rabbit ears and pull up a chair.

Even when cable TV came along, many in the industry thought it would be a useful tool for delivering programming to those who lived to far out in the country to pick up a broadcast signal, but few really believed that viewers would be willing to actually pay for television.

Of course, that’s not how it worked out.

Cable cost money, but it paid off by delivering higher quality programs, movies and sports. Eventually the idea of “free TV” went out the window. Of course, so did the idea that we’d all watch the same thing at the same time. In the 1970s, there were nights when more than a third of the TVs in the country were turned to terrible episodes of “Laverne & Shirley.” Today, excellent programs such as “The Wire” and “30 Rock” survive even though they draw just a few million viewers.

Of course, in this scenario, papers such as The Washington Post are akin to HBO in the 1970s. They will keep charging even though many of their competitors are free. In fact, the newsstand price of the Post has increased from 35 cents in 2007 to 75 cents today. It will attempt to convince readers that it offers superior value: better news coverage, sharper columnists, more comics, whatever.

Can today’s newspapers make the old model work? That’s the big question for journalists in 2010.

Luckily, another tired model has been retired. Hopefully for good. No longer will race-baiting poseurs be able to shut down debate by simply calling others “racist.”

This ugly trend finally ended when Senate Majority Leader Harry Reid was quoted in the new book “Game Change” as having said Americans were ready for a black presidential candidate, especially one such as Obama, who is “light-skinned” and has “no Negro dialect, unless he wanted to have one.”

It goes without saying that if a conservative had made such remarks, he’d be hounded from office, as then-Majority Leader Trent Lott was after suggesting that Strom Thurmond ought to have been elected president on the avowedly racist Dixiecrat ticket in 1948.

But the liberal establishment quickly closed ranks behind Reid.

“I accepted Harry’s apology without question because I’ve known him for years, I’ve seen the passionate leadership he’s shown on issues of social justice, and I know what’s in his heart,” President Obama announced. Never one to miss a chance to comment, Al Sharpton added, “Sen. Reid’s door has always been open on hearing from the civil rights community on these issues, and I look forward to continue to work with Senator Reid wherever possible to improve the lives of Americans everywhere.”

Good for Reid. But now that Obama’s granted him absolution, it’s time for his allies on the left to stop crying racism whenever a policy goes against them.

Just last year, for example, former President Jimmy Carter told NBC News that, “I think an overwhelming portion of the intensely demonstrated animosity toward President Barack Obama is based on the fact that he is a black man, that he’s African-American.” That’s wrong.

Most of the animosity is because Obama is pushing a liberal agenda in a country that polls show still leans conservative. If Obama would, for example, slash spending and cut taxes, he’d enjoy widespread support, and his race would have nothing to do with that.

So this is the year that cries of racism have been officially buried. Oh happy day. Will newspapers survive to report on the country’s post-racial future? We’ll see.

Rich Tucker is senior writer at The Heritage Foundation, heritage.org.