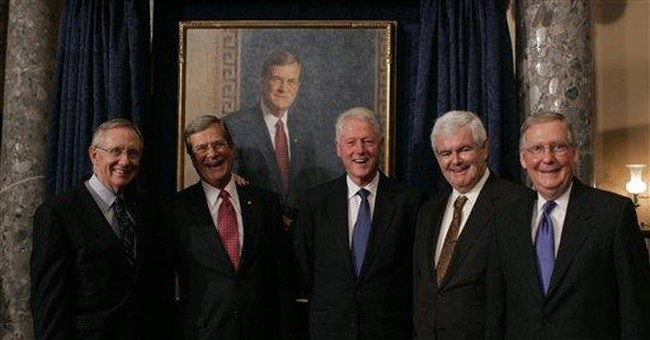 A Washington tell-all book is seldom a good place to look for political wisdom. But, whether he meant to or not, former White House speechwriter Matt Latimer’s new book, “Speech-Less: Tales of a White House Survivor,” makes at least one important point: politics should be about ideas, not personalities.

Unfortunately, that hasn’t been the case recently. Conservatives coined a term, Bush Derangement Syndrome, to explain the fierce opposition many liberals had to George W. Bush personally. It wasn’t simply his policies they opposed, it was him.

They hated the way he walked, the way he talked. He exhibited “faux cowboy swagger and mangled prose,” wrote commentator Leonard Doyle in Britain’s The Independent. “I hate President George W. Bush. There, I said it,” wrote Jonathan Chait in The New Republic in 2003. There was a book and a movie (not based on the book) about assassinating Bush.

Here’s the big problem, though. Liberals also managed to paint Bush as the face of conservatism, when in fact he was the face of the Republican Party. There’s a big difference.

Latimer seems to slip into the same trap, taking pointless swipes at Bush advisors including Ed Gillespie, John Bolton and, prominently, Karl Rove. “His operation went on a power trip -- and was ineffective at advancing conservative ideals,” Latimer wrote in a Sept. 20 Washington Post op-ed to promote his book “After Rove took over policy chores, the administration passed no significant conservative legislation through a Republican Congress.”

That’s correct, but misunderstands why Rove failed. It wasn’t a lack of intelligence. It was because he was attempting the impossible: Build a permanent (Republican) governing coalition.

On issue after issue during the Bush administration (Medicare part D, earmarks) Republicans moved to the center or the left. Too many abandoned their conservative principles and embraced big government, hoping that would keep them in office forever. Small wonder voters disposed of so many GOP incumbents in recent elections.

Of course, it’s now liberals who seem to think they’ll be in power forever. Although, of course, they won’t.

“A few months ago, it seemed as though the GOP had been decimated by an ascendant President Obama,” as Latimer writes. “It appears, for the moment, that Republicans have a new opening. And critical to Republicans’ efforts to reintroduce themselves to the American people is a clear discussion of what became of the conservative movement over the past eight years.”

But, again, it wasn’t conservative ideas that failed in recent years. It was big-government Republican strategy. Where Bush acted conservatively, by cutting taxes, pressing for free trade and passing the PATRIOT Act, for example, he succeeded. Those measures boosted the economy and helped protect the homeland. Where Bush promoted big government, he failed.

Of course, this trend toward making politics personal goes far beyond Bush. You can also see it when a newspaper seems to support a candidate because of the letter after his name. Take this year’s race for governor in Virginia. During the spring primary, The Washington Post endorsed R. Creigh Deeds over two other (better-funded) Democratic candidates. That endorsement was seen as a big factor in his upset victory.

The newspaper said a key reason it backed him was that, “Deeds has made clear that he would make transportation his first priority.” But many months have rolled by, and Deeds still has no transportation plan.

Just this week, he admitted as much in a Post op-ed. “The day after I’m elected, I will begin assembling a bipartisan commission to craft a comprehensive transportation package,” Deeds wrote. But that’s too late.

A Virginia governor’s strongest day is Election Day. Because the incumbent can serve only one term, lawmakers know they can run out the clock once the governor is in office. Deeds seems to be preparing to repeat the mistake made by current governor Tim Kaine, who was elected without a traffic plan but immediately convened a “listening tour” that, predictably, failed to accomplish anything.

Kaine grew so bored with Virginia that, in January, he accepted a second full-time job as chairman of the Democratic National Committee. He’s spent much of the past year traveling the country. He’s promised to fight for his party “now and forever” in all 50 states. But Virginians wish he’d do less fighting and more governing. After all, that’s what we’re paying him for.

In any event, look for the Post to endorse Creigh Deeds (although it may say it’s doing so “reluctantly”) in the weeks ahead. If it does, it will have put party affiliation ahead of political ideas.

Conservatives aren’t always the most photogenic of people. We sometimes stumble over syntax and, yes, even have been known to “swagger” a bit. But that’s because our ideas are sound, and seem to work whenever they’re tried. Conservatism isn’t personal. But (unlike tell-all books) it makes for good politics.