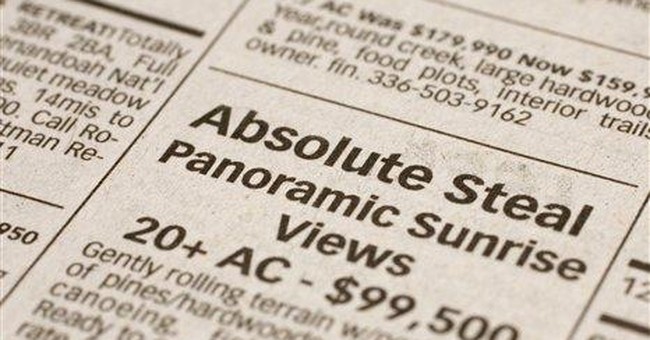 Sometimes a newspaper headline is shocking not for the information it provides, but for the way it blows up what you think you already knew.

Take this front-page offering in the Dec. 17 issue of The Washington Post: “Welfare Rolls See First Climb in Years.” The news isn’t that, in this time of recession, welfare rolls are climbing. The news is that the number of people on welfare has been dropping for more than a decade.

“For the first time since welfare was redefined a dozen years ago, weaning millions of poor Americans from monthly government checks, the deteriorating economy is causing a surge in welfare rolls in a growing number of states,” begins the story, written by Amy Goldstein.

Wait -- the first time? After a year filled with bad economic news -- from soaring gas prices all summer to surging unemployment and sinking stock prices, it’s only now that welfare numbers are climbing for the first time?

What about 2004, when our economy was also supposedly tanking?

On the campaign trail John Kerry accused President Bush of having “the worst economic record since the Hoover administration.” In June of that year his spokesperson Allison Dobson declared, “Families are still struggling in this economy. Jobs are scarce and those lucky enough to have one are making $1,500 less each year.” His running mate John Edwards warned that, “Tonight a 10-year-old little girl will go to bed hungry, hoping and praying that tomorrow will not be as cold as today because she doesn’t have the coat to keep her warm.”

Funny that in such dire times those starving, unemployed, underpaid, coatless Americans didn’t swell the welfare rolls. That’s partially because the economy hasn’t been as bad as advertised over these last dozen years or so.

Remember when Ross Perot, running for president in 1992, warned that free trade with Mexico would create a “giant sucking sound” as millions of jobs poured south? Yet despite the dire warnings, free trade has boosted the American economy. Our country added 27 million jobs between 1993 and 2007, and unemployment (not surprisingly) tumbled.

Another reason welfare rolls have been shrinking is because the government started demanding that people look for work, rather than just accept a handout.

The “smart” people insisted this wouldn’t work, of course. Peter Edelman is now a law professor at Georgetown University. Back in 1996 he resigned from the Clinton administration in protest. “I have devoted the last 30-plus years to doing whatever I could to help in reducing poverty in America,” he wrote at the time. “I believe the recently enacted welfare bill goes in the opposite direction.”

Well, things went in the right direction for 12 years. Yet Edelman now sounds as if he’s being vindicated. “The whole construct is to go out and find jobs,” he told the Post. “So it’s a Catch-22. It’s kind of an impossibility.” Um, sure. Whatever you say.

We’ve had 12 years of success, followed by one month or so of failure. Wait long enough and any policy is bound to fail, if only because it will have fixed the problem it was created to solve.

For 30 years, the federal government tried to spend enough to get rid of poverty and failed utterly. By reforming the system, the government encouraged millions to find jobs and fuel the economy. Funny how that story seems to have gone unnoticed all these years.

Speaking of good news that flies below the radar, how about this: the Defense Department reports that “All active-duty and reserve-component U.S. military services met or exceeded their November recruiting goals.” In fact, the Army has met its goals three years running and expects to in 2009 as well. Even in a time of war, when everyone who signs up can expect to see combat, our military is able to recruit all the people it needs.

Want more good news? In early November Yahoo! news reported that many high-tech items were already sold out for the Christmas season. “Guitar Hero: World Tour” and “Wii Fit” were among the games selling so quickly they were gone weeks before the holiday. And Amazon cannot keep its electronic book, Kindle, in stock. Even at $359, “Kindle is sold out. Please ORDER KINDLE NOW to reserve your place in line,” the Web site says. Maybe Americans are better off than we think we are.

Yes, the economy has taken a pounding. But as you gather with family and friends this Christmas season, pause a moment to consider some good news. It seldom makes headlines, but it’s all around us if we’re willing to look.