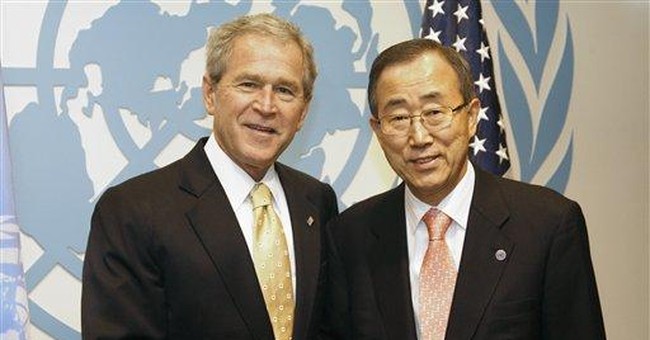 It’s strange how some expressions just fade away, while others seem to stick around forever.

For example, children still pepper their speech with the word “like,” as they have for generations. And the word “say” has been all but replaced by the word “go.” As in, “I go, ‘like, no way,’ and she, like, goes, ‘so, totally.’” And so forth.

Other expressions, though, have become quaint and unusual. Consider the French expression “c’est la guerre.” You don’t hear this one much anymore. And there’s a good reason for that.

Merriam-Webster’s online dictionary defines “c’est la guerre” to mean “that’s war: it cannot be helped.” And it’s worth remembering that, throughout human history, this was the common view. War was a regular part of the landscape for virtually everyone, virtually everywhere. It “couldn’t be helped.”

Not anymore, though. War is relatively rare these days.

It almost goes without saying that in prehistoric times, life was brutal and short. Humans were at war often with each other, and always with nature. Animals and the environment were endlessly dangerous and needed to be tamed if humanity would survive.

Even when humans managed to civilize our living space, we didn’t stop fighting each other. As Robert E. Lee put it at Fredericksburg, “It is well that war is so terrible, or we should get too fond of it.”

Alexander the Great supposedly wept when there were no more worlds to conquer. But who can doubt that, had he lived, he would have gone right on leading armies into new lands, killing and capturing along the way?

It didn’t matter, either, whether people lived under a strong central government (such as Rome) or under a series of weak kings (as in the Middle Ages). War never ended. Whether it was the Crusades, a series of raids on neighboring castles and kingdoms, or the 100 Years War, people kept fighting each other.

Think North America looked different? Many like to idealize Native Americans as peace-loving, back-to-nature types -- proto-1960s hippies wiped out by Columbus and his smallpox. It’s not true.

Indians existed in a constant state of tribe-against-tribe warfare. Consider the Iroquois. In their book, “Beyond the Covenant Chain,” Daniel Richter, James Merrell and Wilcomb Washburn write that, “Far from being the savage rulers of a wilderness empire, as old myth has portrayed them, the Iroquois were brought by the accumulated effects of famine, disease and war ‘within two finger-breadths of total destruction.’”

Man’s eagerness to kill and conquer other men didn’t stop in modern times, either. We just got better at it.

At the dawn of the 20th century, British poet Hillaire Belloc presaged the violence to come when he pointed out that his country’s troops would prevail in developing lands because, “Whatever happens, we have got the Gatling gun and they have not.” Of course in World War I, both sides had versions of the “Gatling gun,” and by the time the Allies prevailed, millions had been slaughtered.

Things didn’t immediately change even after a second World War. One reason the victorious allies formed NATO was to, in the words of its first Secretary General Lord Ismay, “To keep America in, to keep Russia out and to keep Germany down.” Leaders expected another war, and wanted to have their militaries prepared for it.

Even the award-winning children’s book “Stone Soup,” published in 1947, plays up the theme. The villagers are frightened when three soldiers come to town. That, again, is a reasonable fear. Throughout history, when armed men came to your village it was bad news, even if they wore the uniform of your country or king.

The Third Amendment to our Constitution seems quaint these days. “No soldier shall, in time of peace be quartered in any house, without the consent of the owner, nor in time of war, but in a manner to be prescribed by law.” But foraging soldiers were clearly a concern in the 1770s, right here in our country.

Yet -- despite the wars in Iraq and Afghanistan and the civil war in Sudan -- today’s world is as peaceful as it’s ever been.

In its annual yearbook, the Stockholm International Peace Research Institute writes that, “In 2007, 14 major armed conflicts were active in 13 locations around the world.” This may sound like a lot of fighting, but it’s really not. “Over the past decade the global number of active major armed conflicts has declined overall,” the institute adds.

The numbers have been trending in the right direction for some time. “Between 1989 and 2002, about 100 state-based conflicts came to an end. More wars are now ending than beginning,” a Human Security Centre report put it in 2005. Humanity has made great progress, and that’s changing our language and our landscape.

C’est la guerre? Maybe the next generation will instead go, “War? Like, what’s that?”