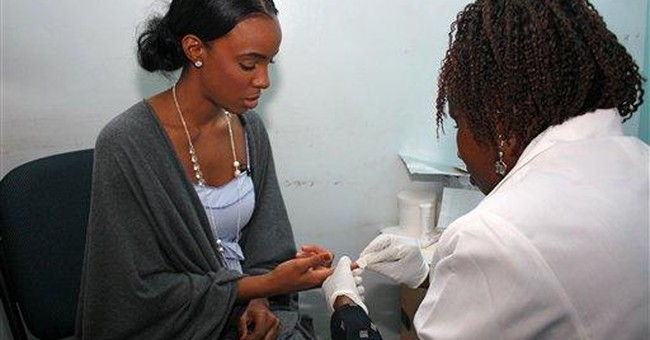 During the recent G-8 summit, the world’s richest and most powerful nations vowed to deliver $60 billion to help Africans fight AIDS and starvation. It’s only the latest big promise to the Dark Continent.

Just three years ago these same leaders committed themselves to an equally ambitious -- an equally unachievable -- level of aid. “Several of the member governments simply are not going to meet their targets,” J. Stephen Morrison of the Center for Strategic and International Studies told The Washington Post. “The commitments were unrealistic with good intentions.”

Those words could be the epitaph for most foreign-aid programs. In fact, for most federal programs in general. They’re launched with the best of intentions, but they’re not going to solve problems.

The world -- and our nation -- needs a better approach. Luckily, help seems to be on the way.

In his 2007 book, “Richistan,” Robert Frank -- wealth reporter for The Wall Street Journal -- details a new sort of philanthropy that might change charity for the better. Frank spends most of the book detailing how the other 1 half of one percent live. It won’t come as a surprise to anyone who’s read F. Scott Fitzgerald that “the rich are different from you and me.”

They fly around on private jets, coast around on giant yachts and hack around on their own golf courses. Some, however, get bored with spending money on themselves. Frank writes about Philip Berber, the founder of A Glimmer of Hope. “Since 2001, Glimmer has spent more than $16 million in Ethiopia,” Frank writes. Most of that went to building wells (bringing clean water to 886,000 people) and opening schools (where 112,000 students are learning).

What makes Glimmer different is that Berber works to get the most bang for his megabucks. “He can deliver water,” Frank writes, “for $5.74 per person, or health care for $4.01 per person.” That’s about half of what traditional aid groups spend on similar projects.

Of course, Berber’s approach doesn’t sit well with the big NGOs that usually run projects in Africa. As Adam Hicks, a spokesman for the international aid agency CARE, told Frank, “You have to understand the world context in which Ethiopia exists, to understand deeply the food issues and exporting world.”

It doesn’t take much experience in Africa to know that people who live in a desert need wells, or that children without schools need classrooms, or that sick people need to see a doctor and get medicine. That’s just common sense. The problem is that -- while First World governments and NGOs spend money freely -- they don’t spend enough of it helping people.

“Most NGOs, if they were private companies, would be in bankruptcy,” Berber observed. “If anyone knew that some of these charities only spend 19 cents of every dollar on the people they claim to be helping, they would be shocked.”

Berber’s successful because -- surprise, surprise -- he speaks to Ethiopians and finds out what they need. They told him they needed water and classrooms, and he helped them dig wells and build schools. He also tries to follow through and make sure the projects he supports actually work. All too often when big bureaucratic organizations are involved, accountability is lacking and projects go nowhere.

That’s a lesson taught by John Taylor, a top Treasury official in the first George W. Bush administration. In his book “Global Financial Warriors,” he explains that he wanted to take a trip to Africa one year after the World Bank had agreed to fund two dozen projects there. Taylor wanted to see the results of the spending.

“In truth, only one of the projects, a textbook project in Kenya, was up and running,” he writes. “There were no timetables to speak of,” and (except for the textbook program) no measurable results. He soon realized, as Berber has, that “What gets measured gets done.”

A Glimmer of Hope aims to change Africa by improving lives there. It also aims to change how wealthy people in the U.S. give money to charity. Instead of throwing lavish balls that cost almost as they raise, the rich would be better off setting up foundations and demanding measurable results from their money. A bunch of small, successful projects would do more than a multi-billion dollar project that never manages to get off the ground.

Africa needs help, and plenty of it. Its future will be brighter if private individuals, instead of government bureaucrats, step up to provide that help.