Smarter Steps to Stimulate the Economy 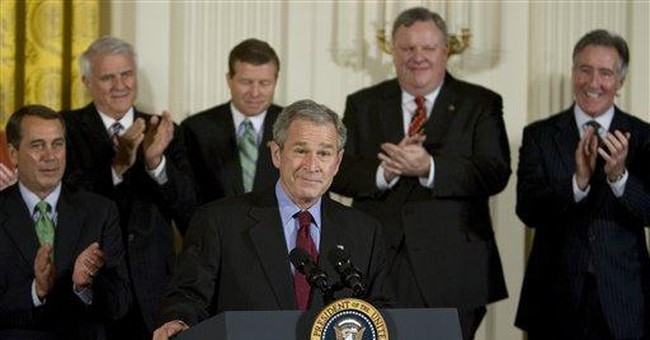 Who’s ready for some stimulating conversation?

This week, President Bush signed a $168 billion measure aimed at “stimulating” our supposedly sluggish economy. In effect we’re borrowing money from future taxpayers and giving it to Americans to spend today.

The package will deliver tax rebates of up to $1,200 per working couple, plus $300 per child. “We have come together on a single mission and that is to put the peoples’ interests first,” Bush announced at the signing ceremony.

It’s the same principle as the minimum wage. Liberals insist they favor a minimum wage because it will help low-income workers and that it won’t, in any way, harm those workers or our economy. But if requiring employers to pay $10 per hour is harmless, why not require them to pay $10,000 per hour? That way we can all work one day a year and be happy.

Obviously, everyone can agree that setting the minimum wage too high would have disastrous consequences, so the only thing we’re arguing over is how high to set it. And the federal government doesn’t exactly have a sterling record when it comes to predicting the consequences of its actions. Thus the only reasonable course is to remove the minimum wage and allow the market, not governments, to set wages.

We shouldn’t expect that to happen, though, any more than we should have expected politicians to show some spending restraint in an election year. Or any year, for that matter.

Clearly, Congress can act swiftly when it wants to spend money. In January, our country got the first dose of bad economic news we’ve had in many years. The Labor Department announced unemployment had climbed to 5 percent (remarkably low by historical standards, by the way). Within weeks, lawmakers had drafted the stimulus measure, tucked in some unrelated pork projects and passed the bill.

As Pat Leahy, chair of the Judiciary Committee, explained when he did set up hearings (not votes) on four nominees this week, “It has been especially difficult to schedule given the important matters that have been under consideration before the Senate so far this year.” Indeed, they’ve been busy. Busy spending our money.

But nominations aren’t the only things lawmakers have been busy ignoring. Congress has also managed to duck the coming crisis in entitlement programs, especially Social Security and Medicare.

These programs are on autopilot, and are steadily growing. Left unfixed, they’ll eventually swallow the bulk of the federal budget. According to the program’s trustees, Social Security alone owes $6.8 trillion dollars more in benefits than it will receive in taxes. How much will we have to stimulate the economy before it’s able to deliver an extra $6.8 trillion in taxes?

Ironically, there are things lawmakers could do to improve our economy. They could start by paring the federal budget, which has grown by leaps and bounds during the Bush administration.

The president calls for restraint now, but as Washington Post columnist Robert Samuelson pointed out recently, his final budget proposal aims to save a mere $18 billion. “That’s six-tenths of 1 percent of federal spending,” Samuelson writes, noting Congress will surely reinstate many of Bush’s proposed trims, anyway.

So let’s think big, and call for an across-the-board, 10 percent cut in federal spending on every program except the military. Surely the Department of Agriculture, for example, can find places to trim some fat from its budget.

Such a step would show that lawmakers are serious about boosting our economy for the long term. It would also give lawmakers the ability to slash tax rates and create personal retirement accounts within Social Security, steps that would help our country build a stronger financial future.

Spending somebody else’s money is easy. If we really want to do something stimulating, let’s do something difficult: Force lawmakers to start addressing problems, and stop simply throwing money at them.