We’re All in this Together? 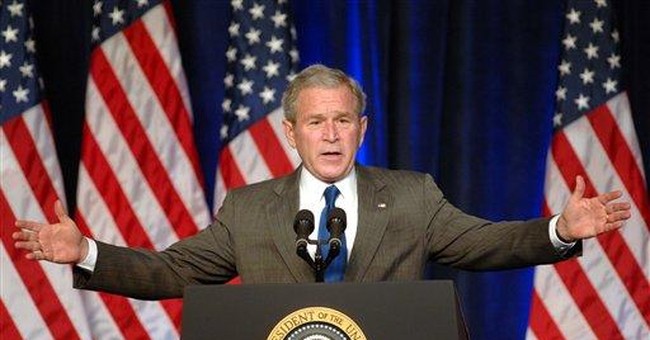 Where have you gone, Rep. Charlie Wilson?

According to his Wikipedia biography, Wilson, a Democratic congressman from Texas between 1973 and 1997, was reliably liberal on domestic issues. “He battled for the regulation of utilities, fought for Medicaid, tax exemptions for the elderly, the Equal Rights Amendment and a minimum wage bill,” it says, adding, “He was also one of the few prominent Texas politicians to be pro-choice on abortion.”

Not much to like there. But as viewers of the movie “Charlie Wilson’s War” know, he was also a staunch anti-communist. Wilson found ways to send money and material to Afghan forces fighting Soviet domination. Even under a Republican administration, he understood that it was more important to win victories in the Cold War than to score partisan political points.

That attitude was even more prevalent on the other side of the aisle.

Recall that, in 1976, then Republican vice presidential candidate Bob Dole endured a lot of criticism for speaking about the “Democrat wars of the 20th century.” He was certainly correct in that Democratic presidents did, indeed, take the country into World Wars I and II, Korea and Vietnam.

Yet Republicans in Congress and those running for president supported our troops in the field and their mission throughout each of those conflicts. They understood the enemy was overseas, not on the other side of Washington’s divide.

Consider Korea. When running for president, Dwight Eisenhower staunchly criticized the Truman administration, but not from the left. Ike said Truman had been unwilling to confront our communist enemies. The North Koreans were empowered to invade, Eisenhower explained, because the U.S. had withdrawn from the peninsula.

Eisenhower announced he wanted to end the war in Korea, but only when South Korea was safe. And even when the war was over, the U.S. wouldn’t pull completely out of South Korea. “United Nations forces in reserve positions and supporting roles would be an assurance that disaster would not again strike,” he announced.

Compare that to today’s politicians.

In his television ads, Barack Obama promises to “end” the war in Iraq. By that he means American involvement in Iraq. “Obama will immediately begin to remove our troops from Iraq,” his campaign Web site explains. “He will remove one to two combat brigades each month, and have all of our combat brigades out of Iraq within 16 months.”

He never mentions the inevitable consequences: We’d instantly lose all the progress of the last year, and virtually guarantee a new round of vicious sectarian fighting. Maybe President Obama could put a “Save Baghdad” sign on the White House lawn next to the “Save Darfur” one that’s bound to sprout there on the day he takes office.

In the latest issue of The Atlantic magazine, Jonathan Rauch explains that the Iraq War offers “a glimpse of one of the ugliest potential outcomes of an already plenty ugly war: a long-term, low-level, persistent civil conflict—not in Iraq, but in America.” He goes out of his way to blame both parties for that divide. But near the end of his piece gives that game away.

As columnist extraordinaire Mark Steyn wrote recently at National Review Online, “But if this is, as many argue, a ‘long war,’ then in a two-party system, don’t the Democrats at some point have to take joint ownership of it? Parties don’t wage wars, nations do.” Exactly. So where’s today’s Charlie Wilson, ready to take joint ownership of the war in Iraq and the greater war on terrorism? Sen. Joe Lieberman’s pro-war stance was so unpopular the Democratic Party chased him away, yet he won re-election as an Independent. No other major Democrat seems willing to defy the Netroots and come out in favor of winning militarily, in Iraq or elsewhere.

During this primary season, as conservatives seem determined to focus their fire on the Republican frontrunner, it might make sense to remember the lesson of Charlie Wilson, Scoop Jackson and Harry Truman.