Making Cents of Our Economy 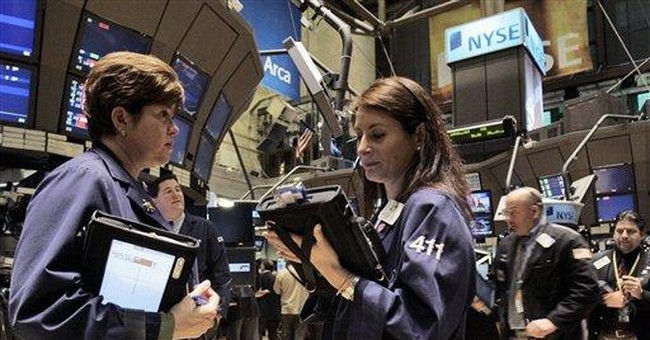 Consider an AP report from Dec. 4. “Hiring practically stalled in December, driving the nation’s unemployment rate up to a two-year high of 5 percent and fanning fears of a recession,” it begins.

At this point it’s probably impossible to count how many warnings of recession we’ve endured. Today the threat is rising unemployment. Last month it was the collapse of subprime mortgages. And in the years before that it was soaring gas prices, Hurricane Katrina and the Sept. 11 attacks. Through it all, month after month and year after year, the economy just keeps growing.

So let’s ignore the news for a moment and consider whether we’re better off than we were just, say, a generation ago.

A recent trip to Florida reminded my wife that, 20 years ago, her parents surprised their three children with a Christmastime trip to Disney World. Back in 1987, that was the ultimate extravagance for a middle-class family, a once-in-a-lifetime voyage. These days, if my stack of Christmas cards is to be believed, plenty of middle-class Americans make a pilgrimage to Orlando every year.

Statistics bear that out. Attendance at theme parks increases every year. Even last month, amid the much-heralded jump in unemployment, “Theme park parking lots swelled past capacity, and pedestrian concourses at Walt Disney World, SeaWorld Orlando and Universal Orlando resembled Manhattan sidewalks during rush hour,” the Orlando Sentinel reported on Jan. 2. The story’s headline says it all: “No sign of tough economic times at Orlando-area theme parks.”

And it’s not simply humans who’re living better than ever. So are our pets. Last year the Progressive auto insurance company announced that, “In most states, a Progressive policy with Collision coverage will now cover its customers’ canine and feline four-legged family members.” Insurance for Fido is only part of a trend, though.

In July 2007, BusinessWeek magazine reported, “Americans now spend $41 billion a year on their pets -- more than the gross domestic product of all but 64 countries in the world.” Keep that in mind the next time you say, “It’s a dog’s life.” Animals in this country have more disposable income than humans in most other countries.

Furthermore, spending on pets has doubled in the last 10 years. Of course, as Walter Cronkite noted in his memoirs a few years back, in a troubled economy the family pet is the first thing to go. “My mother denied it to her last breath,” Cronkite wrote about the early days of the depression, “but I am positive that I remember her making hamburgers out of the dog’s last can of food.” If Americans were being forced to eat dog food to survive they wouldn’t want to share it with an animal. Instead we’re pampering our pets more than ever.

Of course, there are problems. Consider health insurance. Apparently, it’s just too good.

“My insurance company requires no co-payments for generic drugs, so I can theoretically mask [high blood pressure] for free,” Washington Post reporter Michael Rosenwald explained in a story last November. “And it just became cheaper for millions of Americans to get low-cost generics through Wal-Mart, which is charging $4 for a 30-day supply of drugs that treat common ailments such as high blood pressure.” Access to inexpensive drugs is undoubtedly a problem most countries would love to have.

Rosenwald admits he’s overweight, as are millions of Americans. But that, again, is a sign of a good economy, not a bad one. On the whole, we work less strenuous jobs, yet have more money than previous generations. Good work, if you can get it.

Yes, there are problems in the American economy. Too many people lack health insurance, for example. But the answer is to expand the free market by getting them enrolled in private health-insurance plans. How to do that is another column for another day. However, suffice to say the problem will abate when more people control their own health care and can act in their own best interests.

At some point our economy may, indeed, slide into recession. But if past is prologue, we’ll just go on enjoying the most amazing boom in human history. You won’t be reading much about that boom in the papers. But look around, and you’ll see evidence of it everywhere.