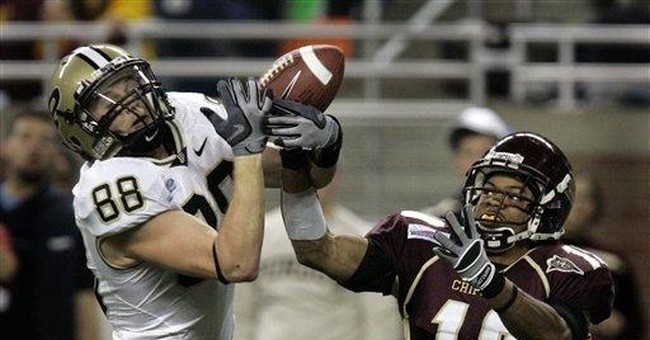 Well, another college bowl season is underway and, between yawns, sports fans are wondering: Can we finally get a football playoff?

Sometime next month, Louisiana State and Ohio State will square off in the BCS Championship game in New Orleans. By that time, LSU will have gone longer then five weeks without having played a down. Even the Colorado Rockies didn’t have to wait that long for the privilege of getting swept in the World Series.

And it’s even worse for the Buckeyes. They’ll have been idle for some seven weeks. At this point, what’s the hurry? If we’re going to give teams this much time off, we may as well wait until August and play the championship game when the weather’s better. That way we’ll guarantee all the players on both teams are healthy and ready to play.

NCAA Division I college football is the only big-time team sport that doesn’t boast a playoff system. Instead, all of its postseason games (except, sometimes, for the championship game) are meaningless. And every year the Bowl Championship Series finds a new way to let fans down.

In 2001 the BCS put Nebraska into the championship game, even though the Cornhuskers were crushed in their final game of the season, 62-36. Few were surprised when Miami cruised past Nebraska.

Two years later, the BCS struggled because there were three teams with one loss. Southern Cal was the Number 1 team according to both major polls, but was snubbed by the BCS. Instead, number 2 LSU outlasted number 3 Oklahoma in the “title” game, even though the Sooners had been wiped out by four touchdowns in their final game of the year.

So, when USC won its bowl game, many thought it deserved to be (at least) co-champion. In fact, the Associated Press sportswriter’s poll listed the Trojans as the top team in the land, so there are two teams with national championship trophies from that season in their trophy cases.

Then, in 2004, USC went undefeated and won the BCS championship. So was Southern Cal a two-time champion (combining their BCS crown with their AP championship from the year before)? Or just a one-timer?

Adding to the confusion that year was that there were three major undefeated teams. While USC got to play Oklahoma, undefeated Auburn was shunted to the meaningless Sugar Bowl. Their victory left the Tigers 13-0, but that was hardly a sweet ending. After this debacle, the AP told the BCS it could no longer use its poll to rank its teams.

Flash forward to this season, when the BCS failed for yet another reason.

Because so many teams lost in the final weeks of the season, there’s no clear number 1 team, let alone a dependable number 2. Ohio State seems worthy with its one loss, but the second banana slot can only be described as a toss-up. LSU won its conference championship game to finish with two losses, but so did Virginia Tech and Oklahoma. The Tigers are in, the Hokies and Sooners out, not because of anything that happened on the field, but because of a computer that crunched the numbers and selected LSU.

This is easily solved.

College football needs an eight-team playoff system. Using the current computer rankings, we should have the number 1 seed host the number 8, number 2 host number 7, and so on. These four games would be played on the second weekend in December.

The remaining four teams would get two weeks for exams, so none of the “student athletes” would miss any class time. They could then play the two semifinal games on New Year’s Day in existing Bowl games (Orange, Sugar, Fiesta, whichever two put up the most money). That would make these bowls relevant again. A week later, we’d have an actual championship game.

By producing a true champion, this system would upset some. As University of Miami President Donna Shalala explained a few years back, “I have long been opposed to a playoff, in part, because the kids remember forever the bowl game they played in. I think it’s important for the kids to feel like they’re winners -- whether or not they won a national championship.”

But that’s easily fixed. There’s no need to eliminate any of the current bowl games. Some can serve as playoff games. The rest could continue as they do today, pitting 6-6 teams against each other in meaningless contests on ESPN. We could even allow the teams that lose in the first playoff round to advance to bowls.

A playoff is the only fair way to determine a champion, which is why the NCAA hosts playoffs in all its other sports. Instead of waiting for the BCS to -- inevitably -- fail again, it’s time for the NCAA to wake its fans up by giving them a true D-I football champion.