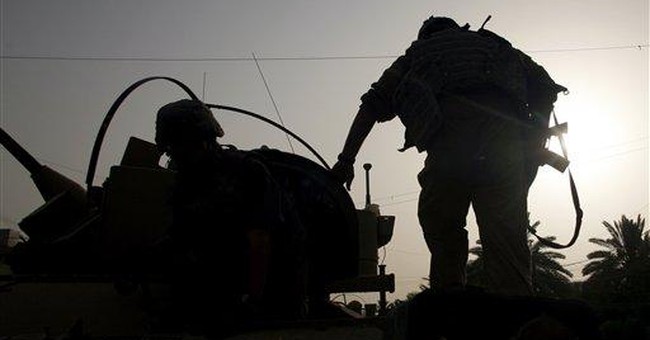 In at least one way, Americans today are all disciples of Woodrow Wilson. No matter what war we’re in, we seem to assume it will be “the war to end all wars.” We seem to think that once the troops come home they’ll stay here, safe and sound.

But, sadly, the real world doesn’t work that way. The end of every war is eventually followed by the beginning of another one.

World War I sowed the seeds for World War II. The unfinished business of that conflict led to Korea and Vietnam. And more than a decade after the conclusion of the Persian Gulf war, Americans were back in Iraq to finally overthrow Saddam Hussein.

So while it’s impossible to say where the next war will happen (it’s more likely to break out in Iran than in Canada), Americans will fight another war after Iraq. That’s why Gen. David Patraeus’ current strategy is so critical, and why we need to give it time to work.

Think of it this way: We know what hasn’t worked in Iraq. Critics are fond of pointing out that for years we seemed to be hunkered down in the Green Zone, isolated from the ordinary Iraqis we were trying to help. We often failed to pressure the enemy, because we didn’t have enough troops in the country. Meanwhile, we didn’t seal Iraq’s borders, thus allowing weapons and terrorists to pour across from Syria and Iran.

We should learn from those mistakes, and not repeat them. But that leaves open a critical question: what methods can work to overcome Islamic insurgents and terrorists? Patraeus is betting on “the surge” to boost troop levels, hold ground and take the fight to our enemies. So far the plan seems to be working. As Victor Davis Hanson put it recently in National Review Online, “In a wider sense, the war is as most wars: an evolution from blunders to wisdom, the side that makes the fewest and learns from them the most eventually winning. Al Qaeda and the insurgents in 2004-’06 developed the means, both tactical and strategic, to thwart the reconstruction, but we, not they, have since learned the more and evolved.”

Or as two Brookings Institution scholars wrote in a recent op-ed in the New York Times, “Here is the most important thing Americans need to understand: We are finally getting somewhere in Iraq, at least in military terms.” This was a significant statement because the authors, Michael O’Hanlon and Kenneth Pollack, have frequently been critical of the way the war’s been fought. But they, and the men on the ground, seen a change. “The soldiers and marines told us they feel that they now have a superb commander in Gen. David Petraeus; they are confident in his strategy, they see real results, and they feel now they have the numbers needed to make a real difference,” O’Hanlon and Pollack wrote.

Not only are we making progress, but we’re learning what works. “We forget that the U.S. Army and Marines, far from being broken, now have the most experienced and wizened officers in the world,” Hanson added on NRO. Indeed we do, and we’ll eventually need those troops to engage our enemies again, whether in the Middle East, Africa or wherever they are.

The war in Iraq shouldn’t be a partisan issue here at home. After all, it isn’t one to our enemies. Ayman al-Zawahiri, al-Qaeda’s deputy leader, showed last December that he understands the larger implications of Iraq. “[Democrats] are not the ones who won the midterm election, nor are the Republicans the ones who lost,” al-Zawahiri said. “Rather the Mujahideen—the Muslim Ummah’s vanguard in Afghanistan and Iraq—are the ones who won, and the American forces and their Crusader allies are the ones who lost.”

A friend of mine, who served in both Afghanistan and Iraq, puts it this way: “For better or for worse, Iraq is NOW a part of the war on terror. We need to try things until they work. Part of achieving the political solution is getting the military situation right.”

Every American would like the war in Iraq to be the final war we have to fight. It would be wonderful if we could leave Iraq and see peace break out everywhere. Suddenly, “arms would be for hugging,” and we could all “give peace a chance.” But the real world isn’t a bumper sticker.

Our troops seem to be making progress. Let’s give them time to fully implement their new strategy, so we’ll know if it works. That will help us win this war, and be better prepared for the inevitable next one.