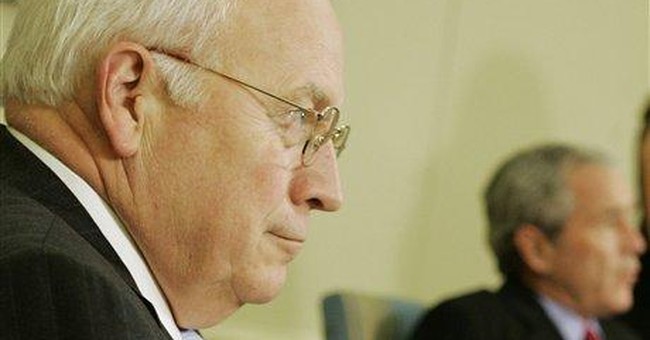 You can learn so much by reading the newspaper.

Now, that’s useful information. Most of us would have guessed that the 19th-ranking official at the Interior Department would be somebody such as Ranger John Smith, who’s earned his seniority by chasing Yogi Bear around Jellystone Park for so many decades. But no, it turns out that if Casey Kasem did an Interior Department countdown, he’d actually have a Washington-desked bureaucrat to rank number 19.

But this wasn’t the only revelation in that day’s article. The story went on to detail how Cheney purportedly strong-armed the government into releasing water from some dams in Oregon. The point, apparently, was to ensure that endangered farmers could remain in business.

When Cheney intervened, the bureaucracy seemed to be leaning in favor of protecting some endangered fish. “Law and science seemed to be on the side of the fish,” the article asserts. A conservative writer could actually craft an entire column based only on that one sentence, but I’ll have to write that piece another time. “What followed was the largest fish kill the West had ever seen, with tens of thousands of salmon rotting on the banks of the Klamath River,” the Post story continued.

And, it claimed, “Characteristically, Cheney left no tracks.”

Hum. If there were no tracks, how did we end up reading about it on the front page of a major paper? He obviously left some tracks, including a phone message he left for “the 19th-ranking Interior Department official.” In reality Cheney would want to leave tracks. The story assures readers he arranged the water release to shore up support with voters in Oregon, a key swing state. Well, the only way to earn their favor would be to let them know he (or his administration) had helped them out. “Leaving no tracks” would be politically pointless.

Here’s the problem: Few of us ever have first-hand experience with stories reported on the front page. We want to assume that these stories are accurate, because we simply can’t be in Congress, or the White House, or Iraq to see for ourselves what’s really happening. Sadly, newspapers all too often fall short.

As another example, here’s how a Post front-page story last summer described life on a Washington-area bike trail. “The traffic is unbelievable -- stop and go for 45 miles,” the Aug. 18, 2006 story claimed. It went on to compare the W & OD trail to a busy highway, insisting, “the trail has turned into a crowded commuter alley on weekdays and an overcrowded recreational destination on weekends, a place where sometimes speeding cyclists, in-line skaters, walkers, joggers and others fight for a narrow slice of pavement, with increasingly dangerous results.”

Well. As it happens, I’m one of those bicycle commuters, so I get a first-hand look at the trail (or at least a 3.5 mile stretch of it) four days a week. There are, occasionally, cyclists who race by without warning. And there are occasional near-misses, it’s true. However, the trail is nowhere near as dangerous as the Post makes it sound when it says, “everyone seems to be jockeying for pole position.”

The story also featured something that seems less common in the news business today: an attributed quote. “Half the people out here aren’t wearing helmets,” 56 year-old Cindy Cluck, a volunteer trail-watcher, told the paper. “It just frosts me.”

Again, my experience doesn’t line up with that description. I’d say about 90 percent of the riders I see are wearing helmets. In fact, on a recent morning, 19 of the 22 riders I encountered on the trail had headgear on. If, instead of taking Cluck’s word for it, the reporter had stood alongside the path for half an hour, I suspect she too would have seen that most riders wear helmets.

In the end, stories which seem aimed at bringing down a particular political figure, or stories that misrepresent things readers see every day, will end up making readers wonder whether we can trust the paper to get things right. Perhaps the best advice is, as the saying goes, “Don’t believe everything you read.”