Getting Along, or Just Going Along? 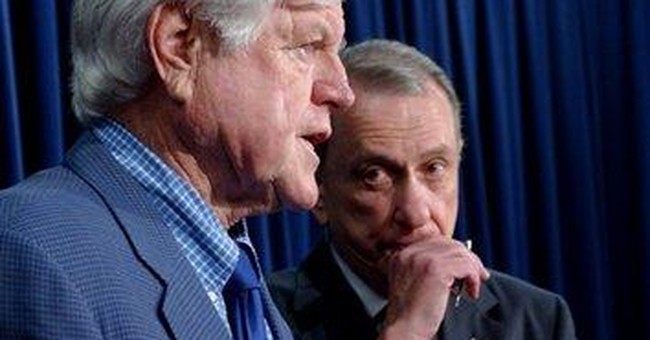 In politics, as in football, the real key is the straight-ahead application of brute force.

Oh, sure, there’s a certain amount of finesse involved in both pursuits. Quarterbacks aim to drop in a perfect pass and running backs can always juke their way into the open field. But in football, the bigger, rougher team tends to win. Note, for example, that even with Barry Sanders’ elusive running, his Lions didn’t win many games.

For politicians, playing tough means being willing to say or do whatever is necessary to win. And, sadly, in the political realm, liberals tend to be much more aggressive than conservatives.

All too often, right-wingers try to build consensus. We want to “extend an olive branch across the aisle” and work with “our liberal friends.” It’s fine to do that as long as we’re not compromising our principles. If liberal lawmakers want to vote for smaller government, support our military in Iraq or slash unnecessary farm subsidies, that’s wonderful. Let’s make a bipartisan deal to accomplish those worthy goals.

Sadly, that’s not how it works. Usually, when conservatives decide to work with liberals, we end up advancing liberal ideals. During the debate over the immigration bill, for example, Republican Sen. Trent Lott went out of his way to praise the liberal lion from Massachusetts.

"Senator Kennedy, I appreciate the legislative leadership you have been providing. I know it is not easy, you know, and your own colleagues and those of us over here have been beating you up,” Lott said on the Senate floor. “Good luck, senator from Massachusetts.”

Predictably (since Lott was working to do what Ted Kennedy wanted him to do by supporting an amnesty bill), Kennedy was kind. “I thank my friend from Mississippi, and I commend him for a constructive and a positive attitude,” he responded.

Well, isn’t that nice. It’s good that we can all agree to get along when Kennedy’s pushing for a bill that’s so bad even Lott admitted, “I don’t like a lot of what is in the bill.” But the fact is that Kennedy doesn’t always play so well with others.

Recall that less than an hour after Ronald Reagan nominated a conservative for the Supreme Court in 1987, Kennedy took to the floor of the Senate. “Robert Bork’s America is a land in which women would be forced into back-alley abortions, blacks would sit at segregated lunch counters, rogue police could break down citizens’ doors in midnight raids, schoolchildren could not be taught about evolution, writers and artists could be censored at the whim of government,” he thundered.

As Dinesh D’Souza wrote at the time, conservatives should have fought back. He says Bork should have replied, “Sen. Kennedy, your question presumes a profound lack of faith in the American people. Do you imagine that the American people lack the good sense to pass laws under which they can live?” Instead, the right allowed Kennedy’s baseless attack to stand, and it set the tone for Bork’s ultimately unsuccessful hearings.

The first President Bush took a lesson from those hearings -- the wrong lesson. In her new book “Supreme Conflict,” ABC News legal reporter Jan Crawford Greenburg writes that Bush considered nominating Edith Jones to the high court, but settled instead for David Souter because Jones’ “conservative credentials would also mean more of a fight, and Bush didn’t want that.”

Souter was indeed “clean and confirmable,” but he’s also been a major victory for liberals, a victory they achieved because conservatives weren’t willing to fight for their principles.

Compare that to what happens when we do fight. In 2005, George W. Bush nominated Samuel Alito to the Supreme Court. “The interest groups and the Democrats on the Judiciary Committee believed they were armed with enough information to derail Alito,” Greenburg writes. But it didn’t happen. Alito was so smart and so capable that, by the third day of the hearings, liberals realized they’d lost. In desperation, Kennedy, seeking to impeach Alito’s character, tried to stall the hearings by forcing the committee into executive session. “I’d want to give notice to the chair that you’re going to hear it again and again and again and we’re going to have votes of this committee again and again and again until we have a resolution,” he sputtered. This time, though, the tough talk didn’t work. The hearings continued, Alito was confirmed, and today he’s issuing reliable conservative decisions from the Supreme Court.

As of February, there were 17 openings in federal appellate courts, but President Bush had only five nominees pending. He should act swiftly and nominate conservatives for all open seats. That will lead to a battle, of course, but it’s a battle of ideas, and that’s one that the right can win.