Good News is No News 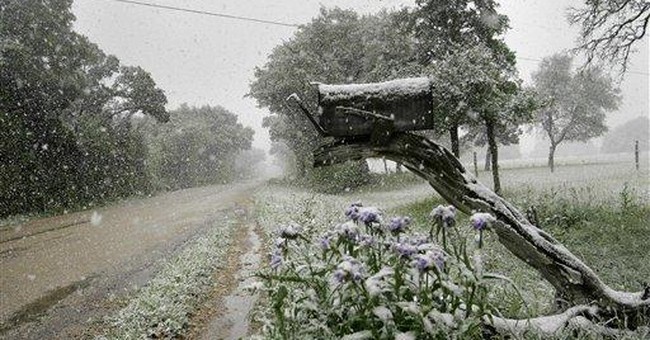 Ready to read about an example of the American dream, and the American reality? Look no further than the June 17 front page of The Washington Post. “Mia Hall just moved into her dream house, a five-bedroom Colonial in Southern Maryland featuring a gourmet kitchen with a center island and a double oven, twin fireplaces and a finished basement, as well as a whirlpool tub and dual shower heads in the master bathroom.” Sounds perfect.

But the Hall family isn’t completely happy. You see, they share a mailbox with neighbors. “When I walk down there, I think, ‘Jeez, this is a long walk.’ It would complete our home if we had a nice mailbox out front that has our number, our name on it,” Mia Hall, a 37-year-old government employee, told the paper. The story also notes that the Hall’s neighbors are building a $618,000 home next door, and are also unhappy with the communal mailboxes.

These folks aren’t alone in their unease. According to the “Economic Mobility Project,” a study sponsored in part by the Pew Charitable Trusts, many of us are troubled.

“Over half of Americans surveyed thought that the American Dream is no longer attainable for the majority of their fellow citizens,” the study insists. “Other polls suggest that Americans are increasingly worried that they will be able to maintain the standard of living they currently enjoy.” Now, is there a reason Americans might wonder if we’re doing well enough? Perhaps because the media bombards us with bad economic news day after day, while good economic news goes virtually unmentioned.

For one example, think about how the press covers gasoline prices. When they’re climbing (as has often been the case in recent months), we see an endless round of stories. But if prices start moving in the opposite direction, it’s ignored. In my neighborhood, gas is again less than $3 a gallon, but that isn’t front-page news.

But the Pew survey gives us other reasons to be depressed. “Those in their thirties in 2004 had a median income of about $35,000 a year. Men in their fathers’ cohort, those who are now in their sixties, had a median income of about $40,000 when they were the same age in 1974,” it says. “Indeed, there has been no progress at all for the youngest generation. As a group, they have on average 12 percent less income than their fathers’ generation at the same age.

This suggests the up-escalator that has historically ensured that each generation would do better than the last may not be working very well.” Statistics don’t lie, but they can certainly mislead. So let’s take on this idea that Americans aren’t doing as well today as our parents did. Start with something we can’t put a price on: lifespan.

Americans are living longer, healthier lives than they did a generation ago. In 1980, life expectancy at birth was 73.7 years. Today, it’s 77.9 years. In addition, we enjoy prescription drugs that people in the 1970s couldn’t have dreamed of. There are pills to lower blood pressure, to control cholesterol, to reduce blood sugar. It’s easier than ever to be healthy.

Since 1979, the median size of newly built homes has increased almost by half, from an average 1,485 square feet to 2,140 feet. 90 percent of new homes have central air conditioning, something only 40 percent had in 1979. Homes such as those being built by the Hall family (with or without a mailbox) would have been eye-popping in the 1970s. Today they’re routine, and even a middle class family getting by on a government paycheck can afford them.

In most countries, poor people live hand-to-mouth, never more than a meal or two away from hunger. But here, even poor children eat plentifully. Studies show they get twice as much protein as the USDA recommends.

As poverty expert Robert Rector testified before a House subcommittee this year, “Most poor children today are, in fact, supernourished and grow up to be, on average, one inch taller and 10 pounds heavier that the GIs who stormed the beaches of Normandy in World War II.”

It doesn’t stop there, of course. Today our globalized economy allows us to enjoy electronic devices undreamed of decades ago. We take our easy and inexpensive international travel for granted. In short, virtually everything’s taken a giant leap forward. But somehow, we’re supposed to believe we’re worse off?

The American dream isn’t dead. It lives on in our bigger houses, our nicer cars, our longer, healthier lives. This generation will do better than the one before. That probably won’t make the papers. But you can count on it, even if you have to walk a block to get your mail.

Leah Barkoukis
'The Single Most Qualified' mRNA Expert Censored After Discussing Concerns Over Vaccines
Leah Barkoukis
Another One? Democratic Senator Revealed to Be Member of Another Mostly White Establishment
Matt Vespa
Why a Black NYC Mayoral Candidate Is Giving the Left Anxiety
Matt Vespa