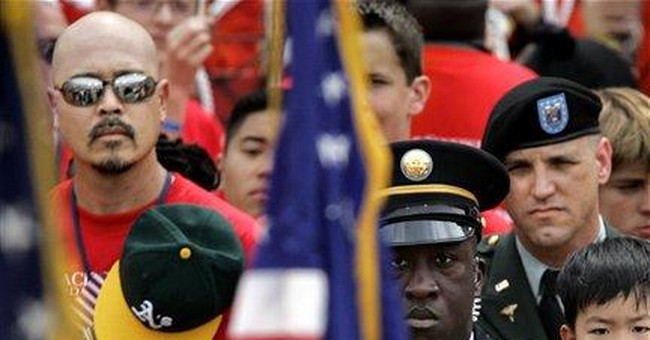 Sometimes, it’s the little things that get you thinking.

This Memorial Day, our family went to the annual parade in the liberal enclave of Falls Church, Va. This parade had plenty of motorcycles, entertainers, even the Shriners in their little cars. What it lacked was patriotism.

I’d vowed to remove my baseball cap every time the American flag came by. But, for the most part, my head remained covered. I counted only three American flags in the parade. There were at least as many Mexican flags. Even the elected officials, Democrats all, drove by without our country’s flag. And while the marching bands celebrated far-off lands including Scotland and Guatemala, there was no emphasis on memorializing American veterans. City officials seem to have decided that, since the final Monday in May is a holiday, they ought to host a parade. But the reason for the holiday was forgotten.

This isn’t the first flag-poor event in Falls Church. In 2003, I attended a rally for then-presidential candidate Howard Dean. Most politicians hide behind the flag, but not Dr. Dean. There was only one American flag in evidence at that event.

So why does this little village of 10,000 or so matter? Because it’s far more likely that the rest of us will eventually join it on the left than it is that Falls Church will rejoin us on the right.

Consider a Rasmussen poll conducted in May. In that survey, 22 percent of all voters said they believe President Bush knew ahead of time about the September 11 attacks. The figure’s far higher for Democrats -- 35 percent say Bush knew, another 26 percent aren’t sure.

There was no need for Rasmussen to ask such a question in the fall of 2001, when virtually every American would have said that of course President Bush didn’t know about the coming attacks.

Sure, there were a few cranks back then, such as Michael Moore. Recall that he wrote on his Web site that day, “If someone did this to get back at Bush, then they did so by killing thousands of people who did not vote for him! Boston, New York, DC, and the planes’ destination of California -- these were places that voted against Bush!” But he was rare.

Today, at least one in five voters has gone over to the Moore side. They think President Bush committed what would be a treasonous act -- allowing Americans to die in an attack he knew was coming. And keep in mind that these numbers are a floor, not a ceiling. It’s not as if, in six months or six years, these people will come to their senses. A decade from now, expect most of those 26 percent of Democrats who “aren’t sure” to have moved to the “Bush knew” camp.

Needless to say, this is hardly a strong foundation upon which to build a lasting country.

The real danger is that our enemies are still out there, plotting to kill Americans. In his book Never Quit the Fight, Ralph Peters writes, “Even after 9/11, we do not fully appreciate the cruelty and determination of our enemies. We will learn our lesson, painfully, because the terrorists will not quit. The only solution is to kill them and keep on killing them: a war of attrition.”

But it’s an open question whether we’re willing to do that. As Peters also notes, our media has become a weapon our enemies use against us. A typical example was The Washington Post’s May 30 lead story, which told readers that 10 American soldiers had been killed in Iraq on Memorial Day.

“Our military avoids a ‘body count’ in Iraq,” Peters writes, so Americans never learn how many terrorists we’ve killed. Meanwhile, “we have allowed the media to create a perception that the losses are consistently on our side. By avoiding an enemy body count, we create an impression of our own defeat.”

Every death is a tragedy, but it’s a shame our media doesn’t put combat losses in context. These warriors died while engaging with -- and killing -- our enemies. Their mission will make our country safer in the long run.At the same time, the federal government estimates that some 500 Americans die each Memorial Day weekend in traffic accidents. For some reason we take those deaths in stride. If newspapers carried daily reports of carnage on our roadways the way they carry daily reports of American deaths in Iraq, nobody would ever drive.

The United States can, and some of us think will, win in Iraq and in the greater war against terror. But it would help if we’d remember our history. With Independence Day right around the corner, flying the flag to honor our veterans would be a good way to start.