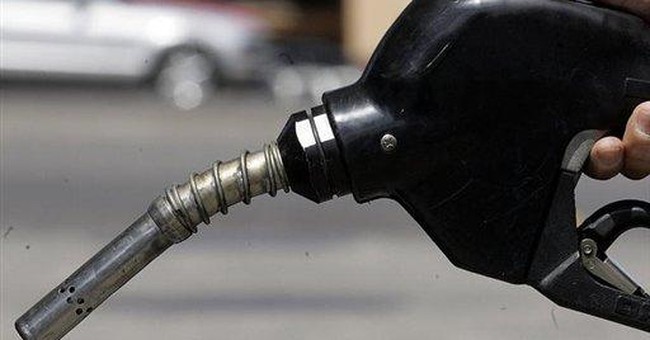 Here’s the very latest warning from Capitol Hill: “If a few great oil companies are permitted to manipulate prices for the next few years as they have been doing since 1920,” a Senate committee wrote, “the people of this country must be prepared before long to pay at least a dollar a gallon for gasoline.” Oops, sorry -- my mistake. That’s not a new report, it’s one written by Sen. Robert La Follette in 1923.

Ah, here it is. The House of Representatives is considering the Federal Price Gouging Prevention Act (H.R. 1252), a measure that would supposedly “protect consumers from price-gouging of gasoline and other fuels.”

The law claims it would do this by making it “unlawful for any person to sell crude oil, gasoline, natural gas, or petroleum distillates at a price that—(A) is unconscionably excessive; or (B) indicates the seller is taking unfair advantage unusual market conditions (whether real or perceived) or the circumstances of an emergency to increase prices unreasonably.”

Maybe lawmakers ought to apply the same restrictions to other products. Some of us might find it “unconscionably excessive” that Starbucks charges the same amount for a 20-ounce cup of coffee that a consumer would pay at a supermarket for an entire can of coffee, one that will make dozens of cups. We might also find it “unconscionably excessive” that the same supermarket charges $1.25 for a bottle of the same water we can get direct from a tap for pennies. Talk about a markup.

There’s a lesson here, if lawmakers will learn it. The federal government has failed -- badly -- to regulate gasoline prices before, and if it tries again it will fail again. That’s because it’s virtually impossible to beat a market economy.

In a free market, consumers get to decide what they’ll pay for a product. If the price is too high, they won’t buy it. Few people owned plasma televisions when they cost $6,000, but as the price has plunged, such TVs have become more common.

The same thing is true for gasoline. If the price gets too high, consumers will buy less and thus drive less. As USA Today reported on May 18, this already seems to be happening. “Miles driven in February declined 1.9 percent from February 2006,” the paper reported, “That’s in sharp contrast to the average annual growth rate of 2.7 percent recorded from 1980 through 2005.” The market works.

Of course, lawmakers aren’t powerless here. There are steps they could take to help consumers. They should start by becoming less involved in the oil industry.

Think back to the La Follette era of the 1920s. Then, gasoline was a true commodity. It was the same whether one bought it in Maine or California. But today, various states and local governments require oil companies to deliver specific blends tailored to their desires. That makes it more difficult for refiners and thus more expensive.

A leading example of this is ethanol. The federal government requires ethanol be added to our fuel supply. This increases the price of both corn and gasoline. If lawmakers would end the era of “boutique fuels,” gas prices and food prices would come down.

What Washington shouldn’t do is attempt to set prices. During his hearings back in 1974, Sen. Jackson complained that he could never find an open gas station. Dealers kept running out of gas and shutting down. Well, that’s completely predictable. Back then, the oil industry was operating under federally-imposed price controls. That meant Washington was artificially limiting the free market’s ability to make gasoline available.

Note that after Hurricane Katrina and now today, with gasoline costing more than $3 per gallon, there are no long lines for fuel and no stations closed for long periods of the day. The price went up, but the system didn’t collapse. Again, the market works.

For decades, politicians have attempted to determine the “fair” price of gasoline. Meanwhile, they’ve been meddling in ways that artificially drive up the very prices they say they’re trying to control.

If lawmakers actually want to help consumers, they should stop legislating and allow a free market in gasoline.