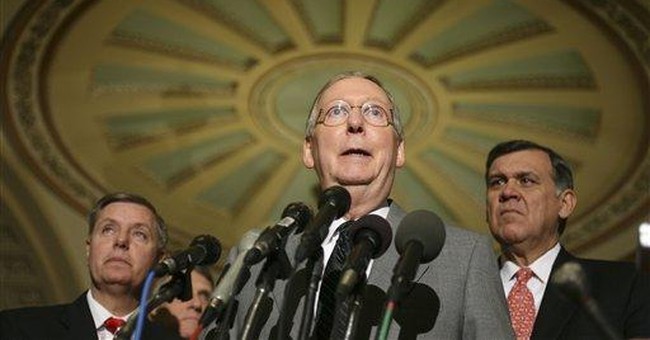 Two years ago President Bush was touring the country, promoting his plan for reform. It went nowhere. So now we’re closer to the baby boom retirement surge and we’ve had no reform, no new plans, and nobody seems to care. Illegal immigration’s a similar story.

Almost three years ago, TIME magazine did a special report about the border. The cover showed two hands ripping through an American flag and declared “even after 9/11, it’s outrageously easy to sneak in.”

When a bastion of the liberal media identifies a problem, one would expect lawmakers to race to solve it. However, when it comes to illegal immigration, Washington has provided plenty of talk but very little action.

For example, I have a correspondent in southern California who’s been part of a private effort to catch illegals. I asked him recently how things were going at the border.

“What border?” he wrote. “Day after day, we have both in-person sightings, and remotely recorded videos of groups crossing.” It was just a year ago that President Bush ordered 6,000 National Guard troops to help out along the border, but they’re clearly not accomplishing enough. On a recent day, my correspondent reports, “There were no Border Patrol or National Guard at the border in our area the entire day.”

But there were illegal aliens. Just two days later, he writes, “a group of at least four illegal aliens was detected using our RVS (Remote Viewing Site) cameras. This was reported to Border Patrol, but they did not have agents assigned to the border this day and could not respond.”

Our lack of action has real consequences.

Nobody knows exactly how many people are here illegally, but the Pew Hispanic Center estimates there are between 11.5 and 12 million illegals, and it says 40 percent of them have arrived in the last five years -- in other words, since 9/11.

Just this week authorities broke up an alleged plot to attack Fort Dix in New Jersey. At least three of the six men arrested were in the country illegally. And the fact that we can’t enforce our immigration law sends a dangerous signal to those who want to attack Americans. “With 12 million here illegally from Mexico, why would any visitor think we could or should enforce the law?” Victor Davis Hanson asks in National Review Online. He adds it’s now “deemed more illiberal to turn in an illegal alien than to be one.”

Many local laws prove that.

The former police chief of Washington D.C. once wrote a memo explaining, “Officers are strictly prohibited from making inquiries into citizenship or residency status for the purpose of determining whether an individual has violated the civil immigration laws or for the purpose of enforcing those laws.” And there are dozens of other “sanctuary cities” where local authorities have promised to ignore federal orders to crack down on illegal aliens.

The fact is we just aren’t serious about attacking this problem. Last year, President Bush said it was time to change that. “In Washington, the debate over immigration reform has reached a time of decision,” he announced. And the Senate did pass a bill last year that would have provided amnesty to most of the illegals who are already in the U.S.

Luckily, members of the House opposed that idea so strongly the bill died. But now, under new leadership, the Senate is poised to again float its amnesty bill. Senators may vote as soon as next week.

They should say “no” to amnesty. A country simply can’t reward people who’ve been breaking its laws. We tried that in 1986, granting temporary resident status to anyone who’d been here for five years. But that law didn’t slow the flow of illegals then, and amnesty won’t work today either.

Instead, lawmakers should focus their efforts on stopping the flow of new illegals. This actually wouldn’t be that difficult. As my correspondent notes, his area had zero crossings when the National Guard was on duty. But once its patrols were eased back, “crossings returned to their usual ferociously out-of-control level.” We need to put guards along the border to discourage illegals. At the same time, we need to crack down on the people who hire illegal aliens.

This, also, can be done. After all, relatively few professions are open to illegals. They mostly work in food (serving it and picking it), janitorial services, construction and low-skill manufacturing. The federal government should make it easier for employers to verify that an employee’s here legally, and it should crack down on the businesses that employ illegals.

This isn’t rocket science. Our leaders have been talking about how to fix illegal immigration for years. Now, it’s time to actually do something. Let’s solve this problem, so we can get back to ignoring Social Security.