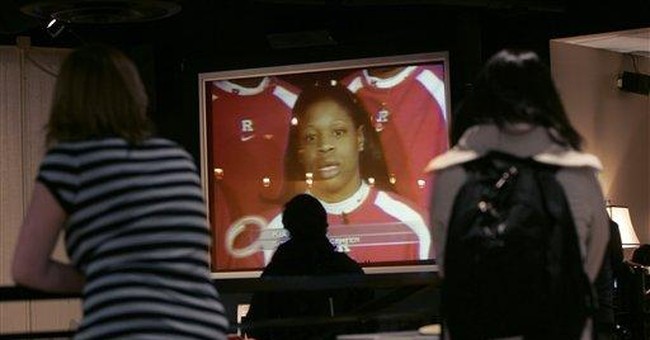 Students go to college to learn. Ironically, that's why Don Imus shouldn't have been fired.

By now, almost everyone has probably heard that Imus, who's made himself plenty of money saying revolting things, called the members of Rutgers University's women's basketball team "nappy-headed hos." For his comment, Imus has been fired from his syndicated radio show. This fulfilled many people's wishes.

As self-proclaimed civil rights leader Al Sharpton, had announced, "[W]e want him fired." Why? Because "[I]f there's no punishment, what message are we sending to the country?" But as is so often the case, Sharpton missed the mark. Imus has already taught the country a lesson, and he'll end up teaching an even more important one. The first lesson is that words can't hurt us, unless we let them. The second lesson is that blacks have made tremendous strides toward equality, and will continue to do so.

Consider the way Rutgers Coach C. Vivian Stringer described her team. "These young ladies are valedictorians, future doctors, musical prodigies and even Girl Scouts," Stringer announced. "They are young ladies of class, distinction. They are articulate. They are gifted."

Think of it: In the near future, one of these basketball players might become a cardiac surgeon, and literally touch Don Imus' heart while saving his life. Another might become a tax lawyer and fill out his return, keeping him out of jail. Their possibilities are endless.

This is one of the great, yet strangely uncelebrated, successes of the civil rights movement. As John McWhorter, a scholar and the author of two books on race relations in America, put it, "The civil rights movement freed African-Americans from more overt kinds of discrimination -- or at least most of them --at a time when, because of 350 years of disenfranchisement and hostility, there was a race-wide inferiority complex."

The fact is that Imus' comments stand out because it's so rare to hear such things from a white entertainer these days. Just two generations ago, there were still laws on the books in many states denying blacks equality. There were many jobs they couldn't aspire to, many restaurants they couldn't enter. But today, women at Rutgers will go as far as their intellect and hard work can take them, and their skin color won't get in their way.

Unless, of course, they allow it to. "African-Americans have been taught to shoot up on the idea that nothing is the race's fault," McWhorter says. "Or put in a more sophisticated way: All problems African-Americans have are due to societal inequity and there could not possibly be from anything driving the culture internally."

That's why Sharpton sounds disingenuous when he claims, "The issue for us is not and has not been the person of Don Imus. It has been the use of the airwaves to blatantly promote sexism and racism." After all, if he really wanted to crack down on sexism and racism, he'd have to start by condemning black rappers, who are by far the biggest purveyors of hate speech.

For proof, take a look at the top of the "Billboard Hot Rap" chart this week. Columnist Michelle Malkin did, and she points out that the top six rap songs in the land contain lyrics demeaning to women or blacks in general. In his book "Enough," journalist Juan Williams asked, "Has anyone seen the civil rights leaders at the head of a march against bad schools or a boycott against the minstrel acts and sex, beer, and gangster images that are promoted as authentic black identity on Black Entertainment Television?" The answer, of course, is no.

Rappers claim that it's different when they insult women. "[Rappers] are not talking about no collegiate basketball girls who have made it to the next level in education and sports. We're talking about hos that's in the 'hood that ain't doing sh--, that's trying to get a n---a for his money. These are two separate things," Snoop Dogg insisted in an interview with MTV.

He needs to take a lesson from Coach Stringer. "To utter such despicable words are not right, whether spoken by black, white, purple or green, male or female, tall or short, skinny or fat, whatever, it is not right. It's time for everybody to reflect on what is going on. Oh, it's time, ladies and gentlemen, it's been time.”

Imus reminds us of that. As these women go on to successful lives, he'll go on as a "shock jock" at some other radio station, saying outrageous things and then trying to avoid getting fired. Ten years from now, he'll probably envy the success the Rutgers graduates are enjoying.

"Here at Rutgers University the Scarlet Knights are just not playing basketball games; we're preparing for life. We're preparing for leadership roles in societies," Stringer says. One lesson her players should learn from this is that there will always be foolish people out there. People who attempt to cut you off on the interstate. People who lie to get ahead (or just because they enjoy lying). People with hate in their heart.

These people can't stop you. That's a lesson for all of us.