Hooked Up … and Reeled In 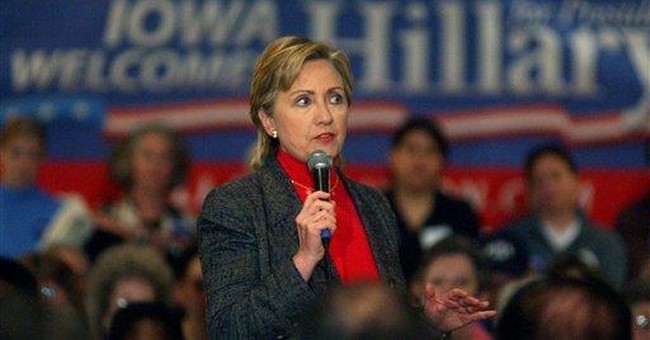 Let’s talk about sex. Or, at least, gender.

On March 29, The Washington Post reported there’s a new movement afoot to finally pass the Equal Rights Amendment, which the paper calls “a feminist goal that faltered a quarter-century ago when the measure did not gain the approval of three-quarters of the state legislatures.” The ERA has been re-introduced in five state legislatures since January.

“We are turning this country around, bit by bit, to put it in a more progressive direction,” declared Sen. Barbara Boxer at a pro-ERA rally. She’s not alone on the campaign trail. Earlier this year, Sen. Hillary Clinton told cheering supporters in Iowa, “It’s about time, if not past time, we had a woman president.”

Well, maybe we ought to nominate a foreign policy expert such as Condoleezza Rice. Or a jack- (jill?) of-all-trades such as columnist Michelle Malkin. Or a crusader for gun rights such as National Rifle Association President Sandra Froman.

Sadly, none of these women would satisfy Clinton’s desire for a “woman president,” because for “progressives” there’s more to being a woman than, well, being a woman.

They want a woman who supports the traditional “progressive” feminist issues. Such as, say, abortion. Here’s how the National Organization for Women frames it on its Web site: “NOW affirms that reproductive rights are issues of life and death for women, not mere matters of choice.” Sounds chilling.

And NOW’s not the only one attempting to frighten women into believing that their rights and lives are at stake. As San Francisco Chronicle columnist Mark Morford wrote just before the 2004 presidential election, “if there’s one famously disenfranchised and alienated and apathetic voting bloc that needs to get off its collective yoga butt and stand up and make itself known this election lest it lose an even larger chunk of its basic human rights than it even realizes, it’s youngish women.”

Morford predicted that a Bush reelection would make “repressing women and hating sex fun again.” Well, that hasn’t yet happened. Chances are it never will.

However, we’re also several decades into the modern “women’s rights” movement, the one personified by the ERA. So it’s worth asking what women have really gotten from that movement. Sure, they’re free to “hook up” with any man they please. But is that really good for them?

In her book “Unhooked,” Washington Post reporter Laura Sessions Stepp writes that, “The beauty of hooking up is that it carries no commitment, and this is huge, for being emotionally dependent on a lover is what scares these young women the most.”

Yet Stepp finds that while women have gained power, many have lost intimacy. “To tell a man ‘I need you’ is like saying ‘I’m incomplete without you’,” she writes. “A young man might say that and sound affectionate. But to an ambitious young woman, who has been taught to define power on her terms and defend it against all comers, need signals weakness.”

Perhaps that’s why a Pew Research Center poll of 18-to-29-year-olds found some 60 percent weren’t in committed relationships. The majority claimed they aren’t interested in being committed.

But, like it or not, human beings do need each other. That’s why, since the dawn of time, we’ve bonded together as families or clans. Feminism can’t repeal this need for partnership. Nothing can.

Tom Wolfe’s 2004 novel “I Am Charlotte Simmons” painted a sad picture of the hook-up culture on leading American college campuses today. Female characters in the book repeatedly made themselves sexually available in a desperate bid for intimacy.

It’s easy for a man to celebrate “wham, bam, thank-you-ma’am” encounters -- after all, according to stereotype we’re supposed to be sexual predators, always on the make. If commitment-free sex is being offered, no doubt most college-aged men will happily take it. But what exactly does a woman get out of a one-night stand, or a series of them? Certainly not love. Or closeness. Or even sexual satisfaction.

And remember, Wolfe isn’t describing women with no other options in life except to “find a husband.” They’re the cream of the crop, women smart enough to get into a top-flight university but apparently not smart enough to realize that bed-hopping will never make men respect them.

Our current culture of easy birth control and easy abortion has apparently given us a generation of unfulfilled women. Too many have been told they’re crusading for “women’s rights” when they’re really only advancing a man’s “right” to behave badly without suffering any consequences.

Ask yourself: Is this really what women’s rights crusaders ought to fight for?